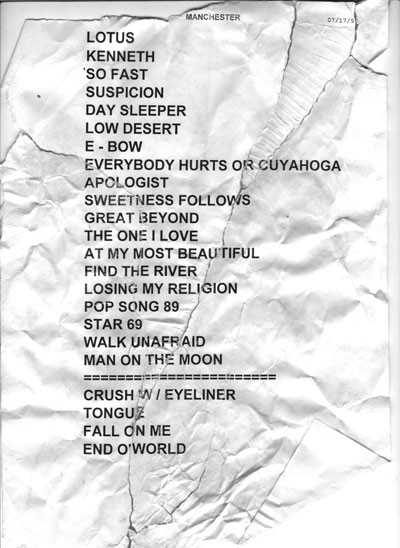 I'm not usually one for getting the setlist at the end of a gig, but after R.E.M. had finished I noticed Michael Stipe's setlist just sat on the stage next to his mic. stand. No-one seemed to be asking for it, so I did. One of the crew handed it to me. I was very pleased until suddenly this girl pounced on me shouting at me to give it to her... then insued a tug of war with the setlist, which was in perfect condition when I was first handed it. The daft girl was getting pretty histerical but I kept hold of it and in the end she ran off. The setlist came off pretty badly and I had to patch it together with gumstrip tape.

It was a good gig, not the best but I don't like the Arena gigs much. I think it was 1999.
Only The Beastie Boys have carried off a gig in this venue as far as I'm concerned.
Artefact added : 5th June 2007
by mat