The Hollies, Pete Maclaine and the Dakotas, The Pete Bocking 6
Flyer
Oasis (venue)
1962 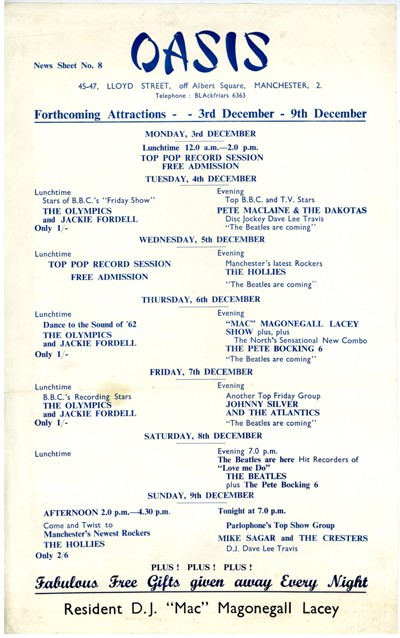 Oasis Club handbill from '62. The Beatles played on December 8th. Sent in by Jason at Tracks, the Beatles specialists.

butch Says –
We ( The Pete Bocking Six ) played alongside The Beatles on the 8th Dec. 1962, there was a bit of an argument with the management, when the Beatles arrived expecting to be top of the bill, ( I know it seems crazy now ) but we were booked for top spot.
The Beatles said they were leaving if the order wasn't changed, they were told that if they left they wouldn't get another gig in Manchester ???. So they were second on the bill to The Pete Bocking Six ! ! ! .
How many of you remember The Two Js ???, that was the name of the club before it changed hands ( and name ) to become the Oasis

muninman Says –
Merchant Navy Officer, eh! The bit I am always intrigued by when old bands are mentioned is whether you are still in touch the other group members. After 50 odd years I would guess not.

butch Says –
Yep !!!, still in touch with quite a few, Derek Quinn-Foutones guitar and lead guitar Freddy and the Dreamers, Pete Maclaine ( Dakotas & the Clan )Ted Lee-bass guitar Olympics, Nick Duval-bass guitar-the Tremors and the Country Gents and last but certainly not the least Graham Nash, I also met up with Alan Clark a few weeks ago. Its amazing how many are still playing ????.
Have a look at manchesterbeat.com you will see them all.

muninman Says –
Just after posting the above I did an internet search for the Dave Bocking 6 and found your site. Bang went 2 hours and I now have it in my favourites.
Great site

butch Says –
manchesterbeat.com is a great (award winning ) site, anything you want to know about Manchester music ( any kind) its on there, if you know something we don't, put it on so we can all read it.
Oh, its PETE Bocking six not Dave !!!. Pete died about 4 years ago, we lost a great guitar player and I lost a close friend.
Pete and myself were founder members of The Fourtones playing lead guitar and bass guitar, with singers Alan Clark and Graham Nash and drummer Joe Abrams, we started The Pete Bocking Six when the Fourtones broke up after our bus crashed on the way home from a gig at the Three Coins on Sat 28th July 1962.
If you'd like to leave a comment, please Login. Login
Manchester Digital Music Archive is licensed under an
Attribution-NonCommercial-ShareAlike 4.0 International License.
Charity no. 1164179
Our archive currently contains 3861 Bands, 758 DJs, 1458 Venues, 316 Industry Professionals and 29644 artefacts contributed by 4033 members.