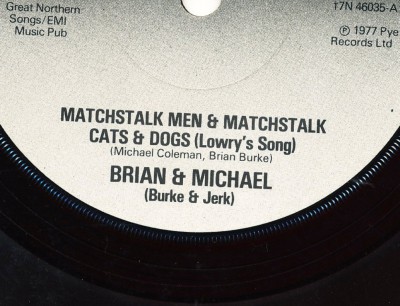 Lest we forget....
I cannot believe Brian & Michael a.k.a. Burke & Jerk, as it says on the record, are not up in lights on the band listings. The singalonga classic "Matchstalk Men And Matchstalk Cats And Dogs" (never quite understood the "matchstalks" thing...).
Along with Elkie Brookes and The Ting Tings they really put Salford on the map.... again...
Well it did get to number 1 and although it was cringeworthy it was quite catchy and a bit of a guilty pleasure.
Eeh dem were de days before dem were the days.....Suddenly I've got Stockport's finest progeny singing "There's no-one quite like grandma" in my head; better move on reaaaal quick!
Artefact added : 7th April 2012
by dubwise-er

pjh Says –
In the early 80's I lived a house in Withington and this was the neighbour's tune of choice to play loudly, on repeat, whenever he came in p*ssed from the pub; which was every evening.

"Matchstalks" for LS Lowry's style, though I can't find any source that suggests that anyone other B&M referred to the paintings in this way,
If you'd like to leave a comment, please Login. Login
Manchester Digital Music Archive is licensed under an
Attribution-NonCommercial-ShareAlike 4.0 International License.
Charity no. 1164179
Our archive currently contains 3861 Bands, 758 DJs, 1458 Venues, 316 Industry Professionals and 29644 artefacts contributed by 4033 members.