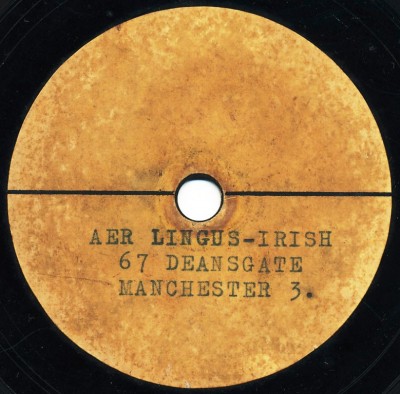 This is just a bizarre curio.
I'm putting it under Bellevue 'cos it kind of reminds me of that old record machine in Belle Vue I've seen mentioned on the site,where you could put your money in and make your first record, just like Elvis did, but as far as I know Belle Vue is one of the few places he was never spotted.
Never had a go on that machine but right next to it was a fortune telling machine that you put your hand on and all these little steel rods would pop out and ripple down your hand like it was reading your palm and then spit out a card with a hand print on it and some sort of prediction and advice for the future.As far as I recall it said something like ..."get on with it!", and so I will.
Well I was working on a fit-out of the old Aer Lingus offices down on Deansgate circa '87, and when we were doing the demo I found this box above the back entry and to my surprise when I opened it I found it was some sort of rudimentary record player with this 7" vinyl (or more like bakalite) record inside of it. It had obviously been there for years and no-one had a clue what it was.Well I took the record home and when I played it, out boomed this sonorous voice in a very clipped and terribly British accent 'a la darling Larry stating "police, police, police, this is an automatic alarm; suspect at Aer Lingus, 67 Deansgate..." and so on....
Obviously some sort of early primitive back to base alarm system ,and if I ever learn how to sample or mash-up it's definitely gonna be in that killer mix somewhere, Oooh yeah!
Artefact added : 7th April 2012
by dubwise-er