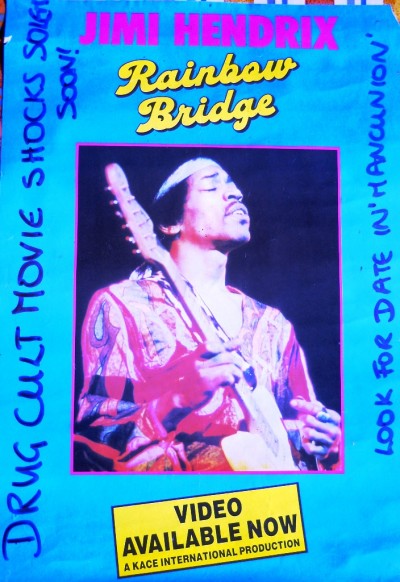 The film "Rainbow Bridge" featuring Soul Brother Number 2, James Marshall Hendrix, which was on at the now defunct Gatley Cinema circa '77; the only time I recall it ever being shown.Of course we only went 'cos Jimi was in it but as it turned out he was only in the last 10 minutes or so and the rest of it was a documentary type film of typical self indulgent '60's hippie drivel.If you ever get a chance to see it don't! though it did have a few inadvertently funny bits as I recall.Still love Jimi though, especially the Band of Gypsies stuff.There was the apparent unrecorded jam session he did one night in London with Miles Davis; the stuff of legends.
Wonder if he ever had a night out in M/c....... down The Twisted Wheel perhaps....?
Artefact added : 25th April 2012
by dubwise-er

isweariwasthere Says –
Jimi did indeed have many a night out in Manchester,seing as he played in the City Centre at least 4 times in 67, the first time 7th Jan 67 at the New Century Hall, after the gig ,Jimi Mitch & Noel went to the wheel to see The Spellbinders, Noel & Mitch got 'manhandled' by the drug squad outside.
If you'd like to leave a comment, please Login. Login
Manchester Digital Music Archive is licensed under an
Attribution-NonCommercial-ShareAlike 4.0 International License.
Charity no. 1164179
Our archive currently contains 3861 Bands, 758 DJs, 1458 Venues, 316 Industry Professionals and 29644 artefacts contributed by 4033 members.