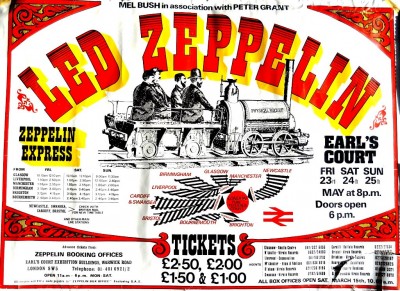 Big f*#ck off poster my sister had up on her bedroom wall after going to Led Zep concert at Earl's Court.It was up there with all the Bowie/Roxy/Cockney Rebel and even Leo Sayer (in his "clown" phase) stuff plastered over every wall.
Well obviously such uber bands could commission their own private trains to ferry their legions of fans from all points of the compass, including Manchester.Don't recall any record shop/ticket outlet called Himes and Addison....?
(just realised it's too small to read on the upload).
I know my sister used to go to The Ranch but I don't know if that was a going concern around this time........
Artefact added : 25th April 2012
by dubwise-er

margaret Says –
Hime & Addison was located on John Dalton Street. They sold tickets from a small booth at the rear of the shop. I remember queuing all night for tickets for Led Zep at Earl's Court (they played from 8.30pm til midnight on the Saturday night - value for money in those days) and also for ELP at the Free Trade Hall!
If you'd like to leave a comment, please Login. Login
Manchester Digital Music Archive is licensed under an
Attribution-NonCommercial-ShareAlike 4.0 International License.
Charity no. 1164179
Our archive currently contains 3861 Bands, 758 DJs, 1458 Venues, 316 Industry Professionals and 29645 artefacts contributed by 4033 members.