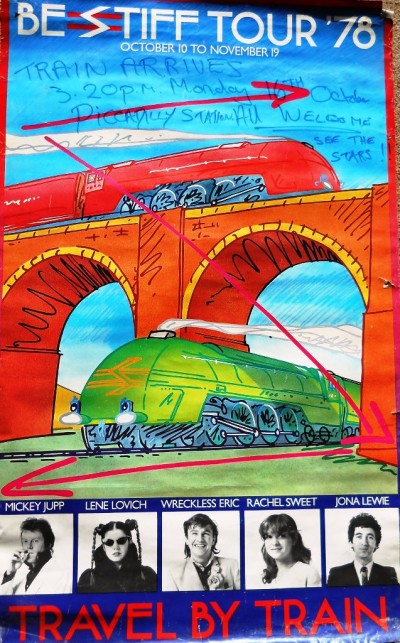 Staying on the train theme tip; a meet 'n greet at Piccadilly Station for The Stiff Tour '78.Not as grand a line up as the previous year's Dury/Costello offering but sterling nonetheless. Think I got this poster off the wall of the old Virgin Records when it was tucked away in the back streets of Piccadilly.I think I've still got the 12" E.P. that was handed out on the tour where several of the Stiff Label's artists recorded their own version of Devo's "Be Stiff". Although it was warped it was still playable and Wreckless Eric's version was a stand out.
Just on a slight tangent it was World Record Store Day last week and for the first time in many a year I went to a record fair, something I normally would steer well clear of; just haven't got the stamina or inclination anymore.I think, like many, I did enough crate digging in my youth to last several lifetimes!Anyway, besides finding out you can now get vinyl records de-warped easily and quite cheaply, I really only went to buy those old 7" cardboard sleeves that you used to get for less than 10 a penny but it turns out you can't even get them for love or anything else now!Occasionally I get to spin a few choons out 'n about and with paper sleeves, when you (well me...) pull a few up in the box planning some vague journey into sound, while you're sifting 'n shifting and changing your mind to find the next crucial choon they all keep slipping and disappearing back into the pack...tricky when you're half pissed at the time. Maybe I should get one of those Ableton things but I doubt I'd be even able to work the on/off button.
Well I've had me little rant so looks like I'll have to go out and get some cardboard boxes from the shops and some ticky tacky tape. Don't ever recall them showing how to make one on Magpie, Blue Peter or indeed "How" for that matter.It's not rocket science I know; it's probably much harder.
Similarly, for those who remember recordings of the vinyl persuasion, it use to the case you could lend albums from your local library; something you can probably still do with c.d.s and d.v.d.s. All you had to do was bring in your stylus from home, they'd stick it under a microscope and say yay or nay, depending on the condition of said stylus.(You could always borrow your mate's one if you weren't particularly flush and felt your particular needle wasn't up to scratch). Burning Spear's "Man in the Hills" and Lindisfarne's "Fog on the Tyne" were about the first records I ever lent and,as with hire cars, you had to inspect every scratch and blemish on both sides of the record to see if it tallied with the library's sketch drawing of it's condition.....what a palaver.Of course, as most people did, even though "home taping is killing music" was a slogan of the time, if the record was to your liking you could tape in on a C 60 or C90;Bow Wow Wow even sang a song about it and if Malcolm said it was o.k. that was good enough for me..(Boring fact #42 for those not au fait with pre digital technology...C 120s i.e. 120 minutes of recording time= 1 hour each side, was apparently of poor quality as the tape was too thin and far more likely to get tangled or chewed up by the cassette player.....nightmare! ).Here endeth the lesson....
Artefact added : 25th April 2012
by dubwise-er