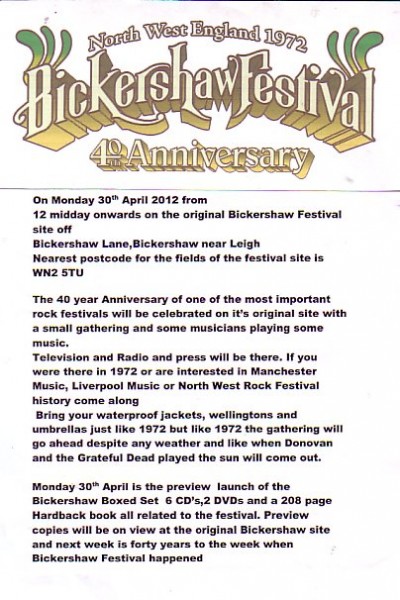 Preview Launch of the Bickershaw Festival 1972 Box Set 6 cds , 2 dvds and a 208 page hardback book - 40th anniversary on the very week on the very spot- a few musicians playing and people gathering on the original site for a small gathering of fans who were there in 1972 some of whom went on to be in bands. TV , Radio and the press will be there 12 midday in Bickershaw near Leigh

this is in the field where 40,000 music fans and 20,000 locals watched the Grateful Dead, Captain , Beefheart, Cheech and Chong, the Kinks, Donovan, Hawkwind, Country Joe, Dr John,Wishbone Ash , Family,New Riders of The Purple Sage,Captain Beyond admission was £2-25 for three days

also at the festival Martin Hannett, Chris Hewitt, Mick Middles, Joe Strummer and Elvis Costello were in the audience, playing with Dr John was Victor Brox- too stoned after a smoke of Dr John's dope to play was Tosh Ryan who only made it to the side of the stage but should have played with dr John.
Artefact added : 25th April 2012
by ozit

davebentley Says –
I was there.... I remember the rain and queueing in the local pub on Sunday for a dump, ahhh festival 'toilets' for some reason I dont remember much of the music I will have to get the CD's
Dave Bentley

boblee Says –
to my wife tina & i this was the most fantastic festival...ever!!.
the reason being it was held about 15 minutes away from her parents
house so we could get as wet/dirty/tired as the conditions dictated
then nip home for a change of clothes the use of a fully fitted bathroom
and get into a comfy bed! .
we managed to find a great spot for ourselves which was a small area of planking
across the raised scaffolding under the stage which was obviously sheltered and
within easy reach of the front row.
this way we got to see/hear all the bands we chose,our spot offered even more though..
the sound was excellent as we were getting "and feeling"it direct from above without it
being whipped around by the wind,.
we had great entertainment watching the brave souls dancing and sliding"many naked"
in the lake of mud directly in frontof the stage,and the icing on the cake there seemed to be
an endless supply of joints!! being passed along from'upstairs' as i said at the begining
a fantastic festival.
bob & tina lee

davebentley Says –
hi ozit / chris hewitt yes I am the one and only dave bentley email me dave.bentley3@btinternet.com

clivechurchward Says –
Phil - I was there - feel asleep with a joss stick in one hand and and a bottle of Newcastle Brown in the other, woke up with a smouldering sleeping bag :)
If you'd like to leave a comment, please Login. Login
Manchester Digital Music Archive is licensed under an
Attribution-NonCommercial-ShareAlike 4.0 International License.
Charity no. 1164179
Our archive currently contains 3714 Bands, 737 DJs, 1379 Venues, 252 Industry Professionals and 26547 artefacts contributed by 3774 members.