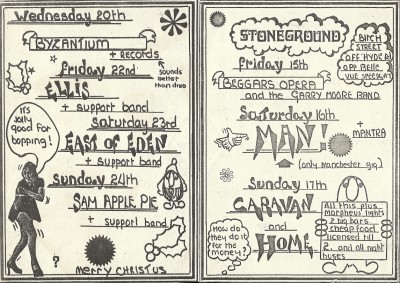 hi there
i was dj & general factotum for a short time in the 70's i can't remember the exact year 73/4 i think, it was just after the club had changed hands after financial problems.
besides playing the records i also designed the posters & flyers placed adds in local papers record shops and painted psychedelic murals as i had done some years earlier at other manchester clubs such as the can can/kaeidoscope/rails.
bob lee
Artefact added : 7th May 2012
by boblee

nobby Says –
First memory of Stoneground is the carpet- your feet made this velcro sound when you walked across it. Then the bogs- upstairs along a balcony?? I loved it, a proper rock club. I saw Golden Earring there, the first quadrophonic sound system I ever heard, Average White Band who were terrific, not like when I saw them at the Apollo- dreadful- and Kevin Ayers, who went offstage halfway through to throw up in the wings! Also saw a band called Home, whose 1st LP I bought with my own good money, good rock band- and they were shit. Broke up shortly afterwards.
If you'd like to leave a comment, please Login. Login
Manchester Digital Music Archive is licensed under an
Attribution-NonCommercial-ShareAlike 4.0 International License.
Charity no. 1164179
Our archive currently contains 3861 Bands, 758 DJs, 1458 Venues, 316 Industry Professionals and 29644 artefacts contributed by 4033 members.