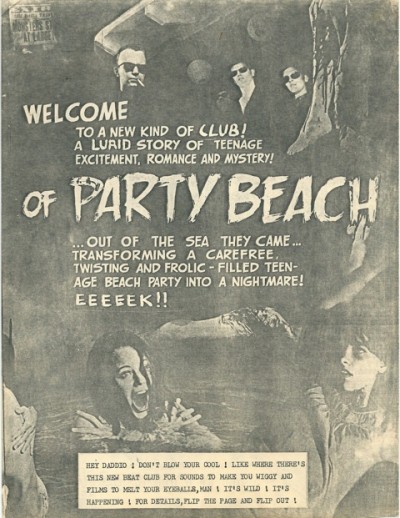 A flyer for the Beach Club at Oozit's designed and sent in by Jon Savage.

Oozit's was originally The Picador, opened as a gay club by Frank 'Foo Foo' Lammarr in 1971.

The Beach Club was a night set up by Richard Boon and other New Hormones/City Fun associates at Oozits, a seedy, collapsing gay bar with foul bogs in Shudehill that queer DJ/City Fun mainstay Liz Naylor described as “Like The Killing of Sister George."

"It used to be a really disreputable, scuzzy gay club. It was completely horrid. It was a complete firetrap. And it had a sort of seedy ambience that was perfect.”

Its style (obscure film showings, the first post-Ian New Order gig) and the Situationist origins of its name would later be borrowed by Factory for the Hacienda.