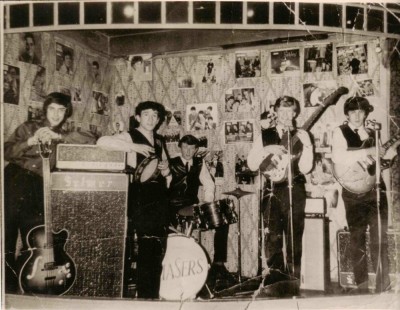 "I remember the Chasers from 1964 they were Ged Harrison, Lead singer, Geoff Foot Guitarist, John Howarth Guitarist, Dave Fallon Guitarist, and John Mills drummer, They played regular spots at The Academy on Regent Road Salford every Thursday and sometimes on Sundays. Ged Harrison has made a name for himself in Germany and has recorded and written many songs. Geoff Foot went on to perform with Mike Sweeney and the Thunderbirds as well as backing Wayne Fontana back in the 60s as part of the Mindbenders. And to date he performs with the Hermits as the lead singer. The photo shows the Chasers taken at the Academy in 1964."
Artefact added : 18th June 2012
by Abigail