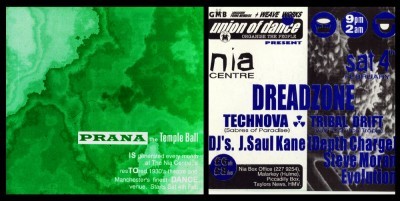 Hi,
My first gig was with Justin Robertson at Konspiracy, the first tune I played was "I Believe" by Octave One, you never forget your first do you ? This must have been 1990
My last gig was for the Premier of "Dancing in the Ruins" a film that I had created the soundtrack for.The Last song I played was "Not Forgotten" by Leftfield.This was likely to be 1994
I dj'd at Pollen,Transform the Hacienda,Ambidextrous, Prana, Parliament, Sunset radio to name a few.Then I went to University and got out of the scene,moved to London , did that thing.
I now live in London have two kids and an ex missus.
I met many many truly brilliant people and am lucky to still count them as friends.
I don't think any other City in the world could have created such a scene .There is something that you find in Manchester that just doesn't exist anywhere else.I love coming back home .
Take care,
Stephen
Artefact added : 26th July 2012
by sjmoran