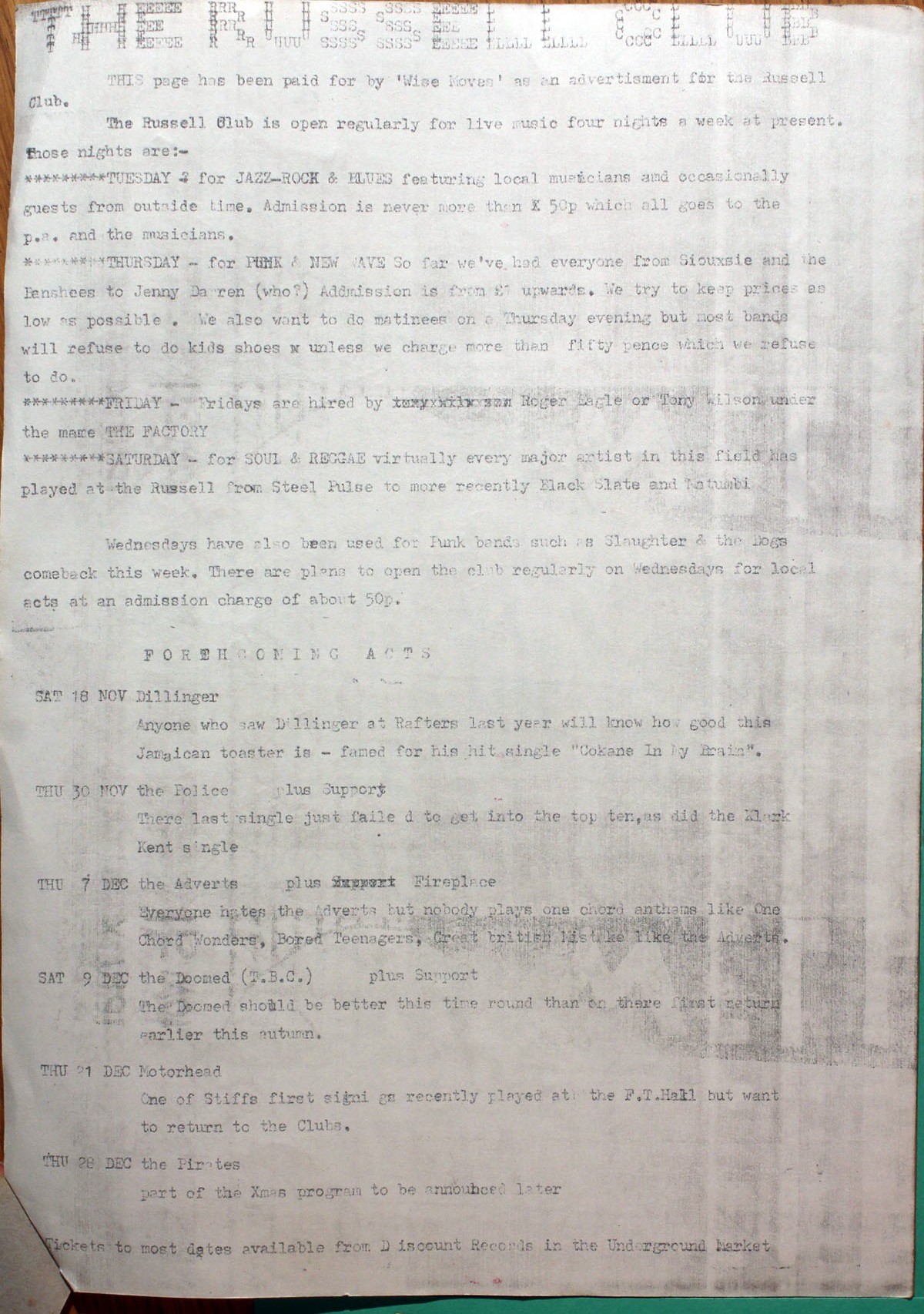 THIS page has been paid for by ‘Wise Moves’ as an advertisement for the Russell Club.

The Russell Club is open for live music four nights a week at present. Those nights are:-
**************TUESDAY for JAZZ-ROCK & BLUES featuring local musicians and occasionally guests from outside time. Admission is never more than X 50p which all goes to the p.a. and the musicians.
**************THURSDAY – for PUNK & NEW WAVE So far we’ve had everyone from Siouxsie and the Banshees to Jenny Darren (who?) Admission is from £1 upwards. We try to keep prices as low as possible. We also want to do matinees on a Thursday evening but most bands will refuse to do kids shows w unless we charge more than fifty pence which we refuse to do.
************FRIDAY – Fridays are hired by xxxxxxxxxxxxxxx Roger Eagle or Tony Wilson under the mame THE FACTORY
************SATURDAY – for SOUL & REGGAE virtually every major artist in this field has played at the Russell from Steel Pulse to more recently Black Slate and Matumbi

Wednesdays have also been used for Punk bands such as Slaughter & the Dogs comeback this week. There are plans to open the club regularly on Wednesdays for local acts at an admission charge of about 50p.

SAT 18 Nov Dillinger
Anyone who saw Dillinger at Rafters last year will know how good this Jamaican toaster is – famed for his hit single “Cokane In My Brain”.
THU 30 Nov The Police plus support
There last single just failed to get into the top ten, as did the Klark Kent single.
THU 7 Dec The Adverts plus XXXXXXX Fireplace
Everyone hates the Adverts but nobody plays one chord anthems like One Chord Wonders, Bored Teenagers, Great British Mistake like The Adverts.
SAT 9 Dec The Doomed (T.B.C.) plus Support
The Doomed should be better this time round than on there first return earlier this autumn.
THU 21 DEC Motorhead
One of Stiffs first signings recently played at the F.T.Hall but want to return to the Clubs.
THU 28 Dec The Pirates
part of the Xmas to be announced later

Tickets to most dates available from Discount Records in the Underground Market.

[Note. This was printed upside down in the original issue]

Dave Haslam Says –
Alan Wise directing proceedings at the Russell Club, explaining the music policy over the week, and reminding all that Fridays are run by Roger Eagle and Tony Wilson under the name "Factory". Forthcoming attractions at the Russell include; the Police, the Adverts, Motorhead.

David Wilkinson Says –
I detect the hand of Alan Wise! I love the fact that it is a gig advert, but is hilariously unprofessional in its misspelled bitchy comments: â€œThe Doomed should be better this time round than on there first return earlier this autumnâ€ and "we also want to do matinees on a Thursday eve but most bands will refuse to do kids shoes unless we charge more than fifty pence which we refuse to do [sic].â€ Whilst this may seem amusing yet ultimately amateurish and counter-productive, there is an important resistance going on here to market dogma controlling punk: to me it says that people shouldnâ€™t be excluded on the basis of purchasing power, and that your true opinion of a band should take precedence over making money out of them. Itâ€™s significant that this advert appears just as the first wave of punk has largely â€˜sold outâ€™ to the majors and disillusion and confusion reign after The Sex Pistols split. The ad is an early sign that City Fun would remain squarely part of the countercultural post-punk scene which was to follow.