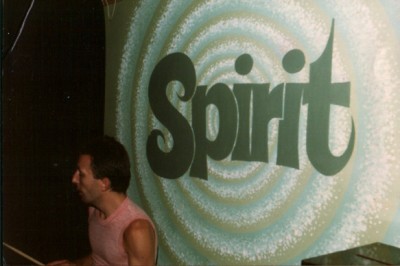 "Fast" Eddie Sherwood, rehersing in Spirit Studios with the old Spirit mural behind him.
Spirit Studios on Tariff Street was a Studio and Rehersal facility before it became the School of Sound Recording in the Mid 80s (and still is).

Fast Eddie was later to leave Biting Tongues to join some band called Simply Red, legend has it he was sacked for being too ugly on the verge of their world wide success (a legend that curently still runs in the Coronation Street story line with Liz Mc Donald's boyfriend drummer sacked as Simply Red's drummer).
Eddie also drummed in amongst other things The Blue Orchids,
InnerSense Percussion, Nico, he also shared a flat with John Cooper-Clarke for sometime - (there's a book in there).
Artefact added : 5th June 2007
by graham

marcegol Says –
Hi there: I was seeking fot a vintage pic of this place for my book about Historic Rock Places in Manchester, to be released in Argentina this year. Do you allow me to use it for the book? Cheers
If you'd like to leave a comment, please Login. Login
Manchester Digital Music Archive is licensed under an
Attribution-NonCommercial-ShareAlike 4.0 International License.
Charity no. 1164179
Our archive currently contains 3860 Bands, 758 DJs, 1458 Venues, 316 Industry Professionals and 29648 artefacts contributed by 4037 members.