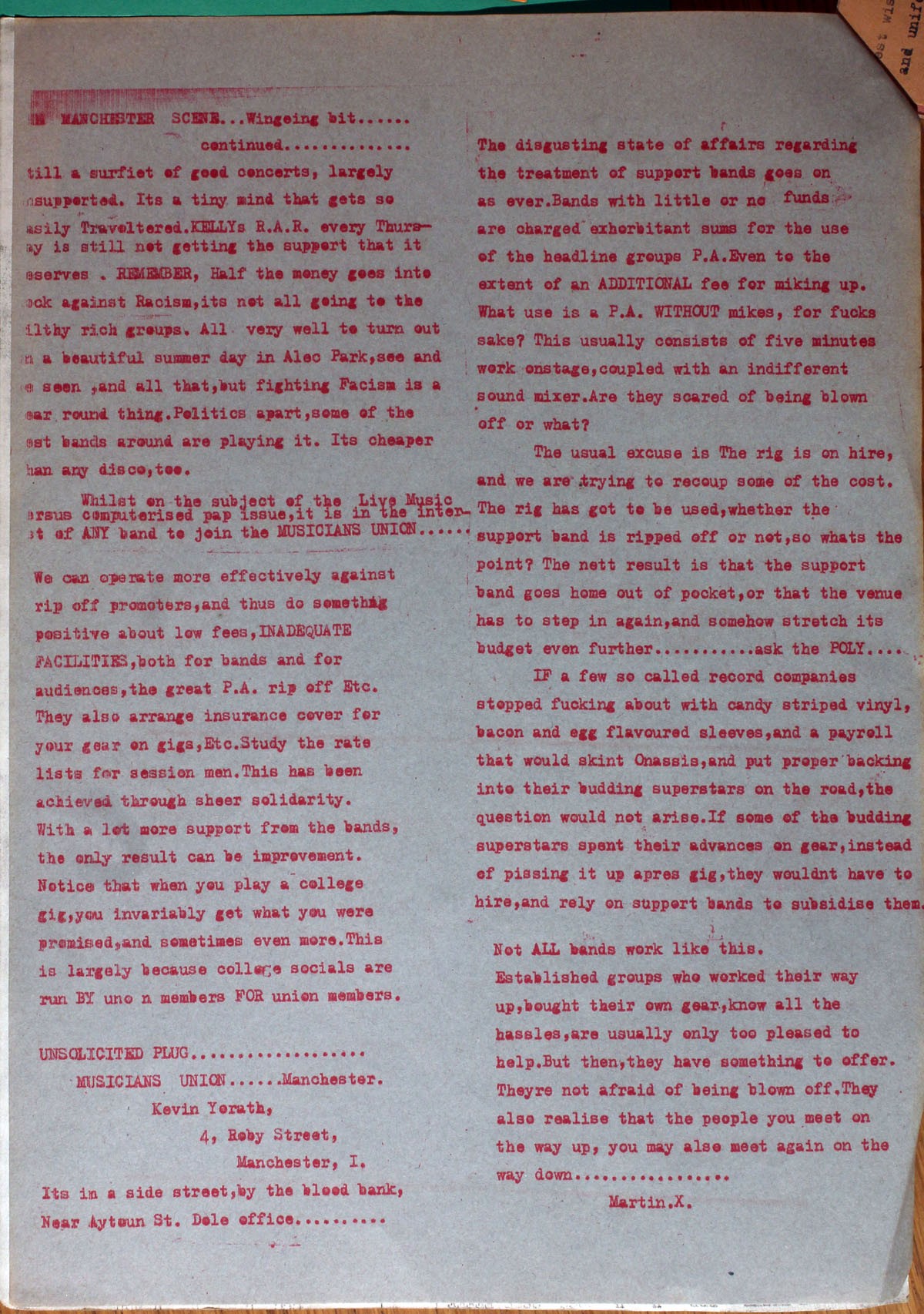 MANCHESTER SCENE…Wingeing bit…. continued………………
Still a surfiet of good concerts, largely unsupported. Its a tiny mind that gets so easily Traveltered.KELLYS R.A.R. every Thursday is still not getting the support it deserves. REMEMBER, Half the money goes into Rock Against Racism,its not all going to the filthy rich groups. All very well to turn out on a beautiful summer day in Alec Park, see and be seen ,and all that,but fighting Fascism is a year round thing.Politics apart,some of the best bands are playing it. Its cheaper than any disco, too.
Whilst on the subject of the Live Music versus computerised pap issue,it is in the interest of ANY band to join the MUSICIANS UNION…..
We can operate more effectively against rip off promoters,and thus do something positive about low fees,INADEQUATE FACILITIES,both for bands and for audiences,the great P.A. rip off Etc. They also arrange insurance cover for your gear on gigs, Etc.Study the rate lists for session men. This has been achieved through sheer solidarity. With a lot more support from the bands, the only result can be improvement. Notice that when you play a college gig,you invariably get what you were promised,and sometimes even more.This is largely because college socials are run BY union members FOR union members.

The disgusting state of affairs regarding the treatment of support bands goes on as ever.Bands with little or no funds are charged exhorbitant sums for the use of the headline groups P.A.Even to the extent of an ADDITIONAL fee for miking up. What use is a P.A. WITHOUT mikes, for fucks sake? This usually consists of five minutes work onstage,coupled with an indifferent sound mixer.Are they scared of being blown off or what?
The usual excuse is The rig is on hire, and we are trying to recoup some of the cost. The rig has got to be used,whether the support band is ripped off or not,so whats the point? The nett result is that the support band goes home out of pocket,or that the venue has to step in again,and somehow stretch its budget even further……ask the POLY….
IF a few so called record companies stopped fucking about with candy striped vinyl, bacon and egg flavoured sleeves,and a payroll that would skint Onassis,and put proper backing into their budding superstars on the road,the question would not arise. If some of the budding superstars spent their advances on gear,instead of pissing it up apres gig,they wouldn’t have to hire,and rely on support bands to subsidise them.
Not ALL bands work like this. Established groups who worked their way up,bought their own gear,know all the hassles,are usually only two pleased to help.But then, they have something to offer. Theyre not afraid of being blown off.They also realise that the people you meet on the way up, you may also meet on the way down…………
Martin.X.