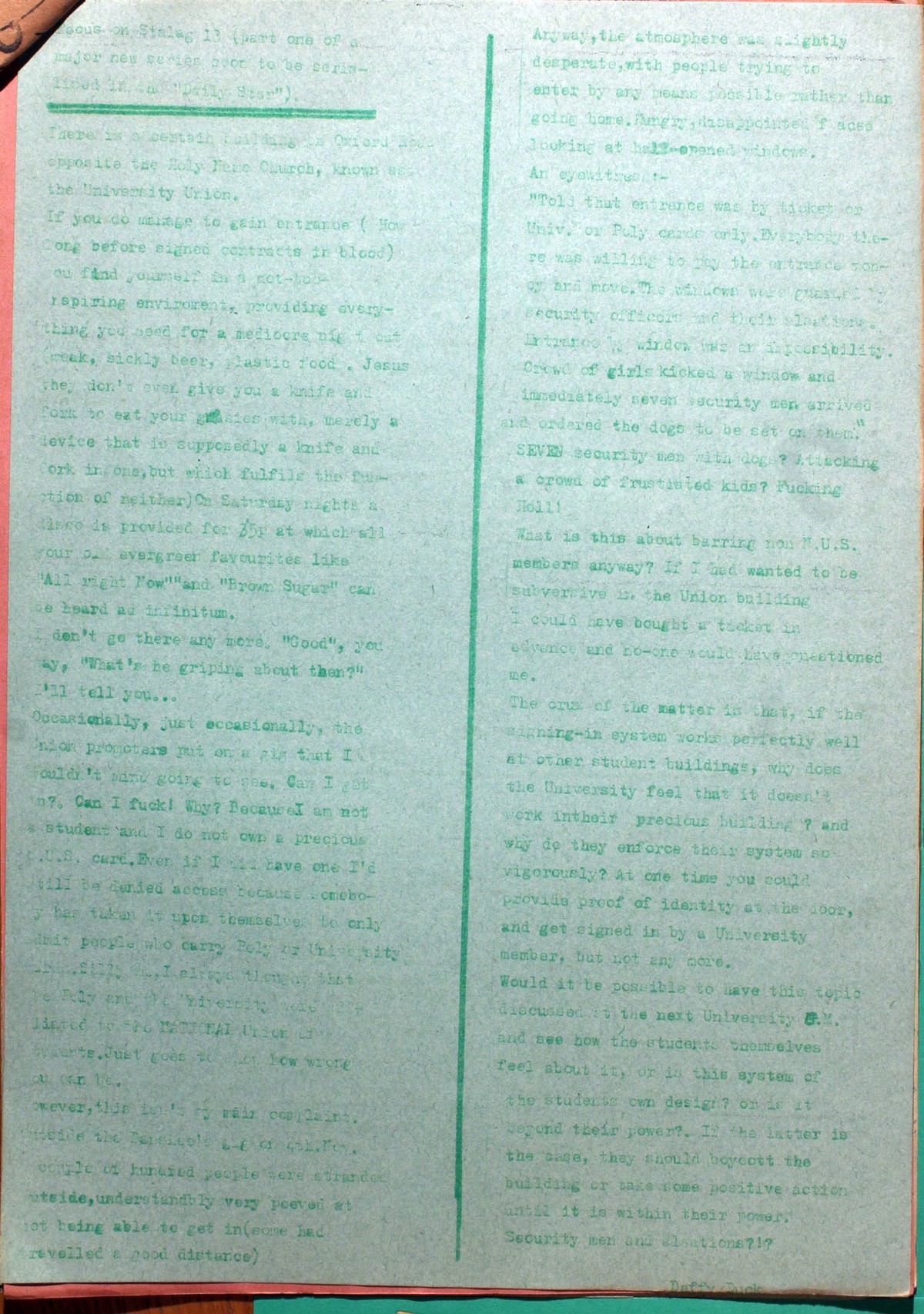 Focus on Stalag 13 (part one of a major new series soon to be serialised in the “Daily Star”).
There is a certain building on Oxford Road opposite the Holy Name Church, known as the University Union.
If you do manage to gain entrance (How long before signed contracts in blood) you find yourself in a not-too-inspiring environment, providing everything you need for a mediocre night out. Weak, sickly beer, plastic food. Jesus they don’t even give you a knife and fork to eat your g(?)sies with, merely a device that is supposedly a knife and fork in one, but which fulfils the function of neither) On Saturday nights a disco is provided for 35p at which all your old evergeen favourites like “All right Now”” and “Brown Sugar” can be heard ad infinitum.
I don’t go there any more. “Good”, you say, “What’s he griping about then?” I’ll tell you…
Occasionally, just occasionally, the Union promoters put on a gig that I wouldn’t mind going to see. Can I get in? Can I fuck! Why? BecauseI am not a student and I do not own a precious N.U.S. card. Even if I did have one I’d still be denied access because somebody has taken it upon themselves to only admit people who carry Poly or University (?). Silly me, I always thought that the Poly and the University were (?) to the NATIONAL Union of Students. Just goes to show how wrong you can be.
However, this isn’t my main complaint. Outside the Banshee’s gig a couple of hundred people were stranded outside, understandably very peeved at not being able to get in (some had travelled a good distance).
Anyway, the atmosphere was slightly desperate, with people trying to enter by any means possible rather than going home. Hungry, disappointed faces looking at half-opened windows.
An eyewitness:-
“Told that entrance was by ticket or Univ. or Poly cards only. Everybody there was willing to pay the entrance money and move. The windows were guarded by security officers and their alsatians. Entrance by window was an impossibility. Crowd of girls kicked a window and immediately seven security men arrived and ordered the dogs to be set on them.”
SEVEN security men with dogs? Attacking a crowd of frustrated kids? Fucking Hell!
What is this about barring non N.U.S. members anyway? If I had wanted to be subversive in the Union building I could have bought a ticket in advance and no-one would have questioned me.
The crux of the matter is that, if the signing-in system works perfectly well at other student buildings, why does the University feel it doesn’t work intheir precious building? and why do they enforce their system so vigorously? At one time you could provide proof of identity at the door, and get signed in by a University member, but not any more.
Would it be possible to have this topic discussed at the next University G.M. and see how the students themselves feel about it, or is this system of the students own design? or is it beyond their power? If the latter is the case, they should boycott the building or take some positive action until it is within their power. Security men and alsations?!?
Daffy Duck