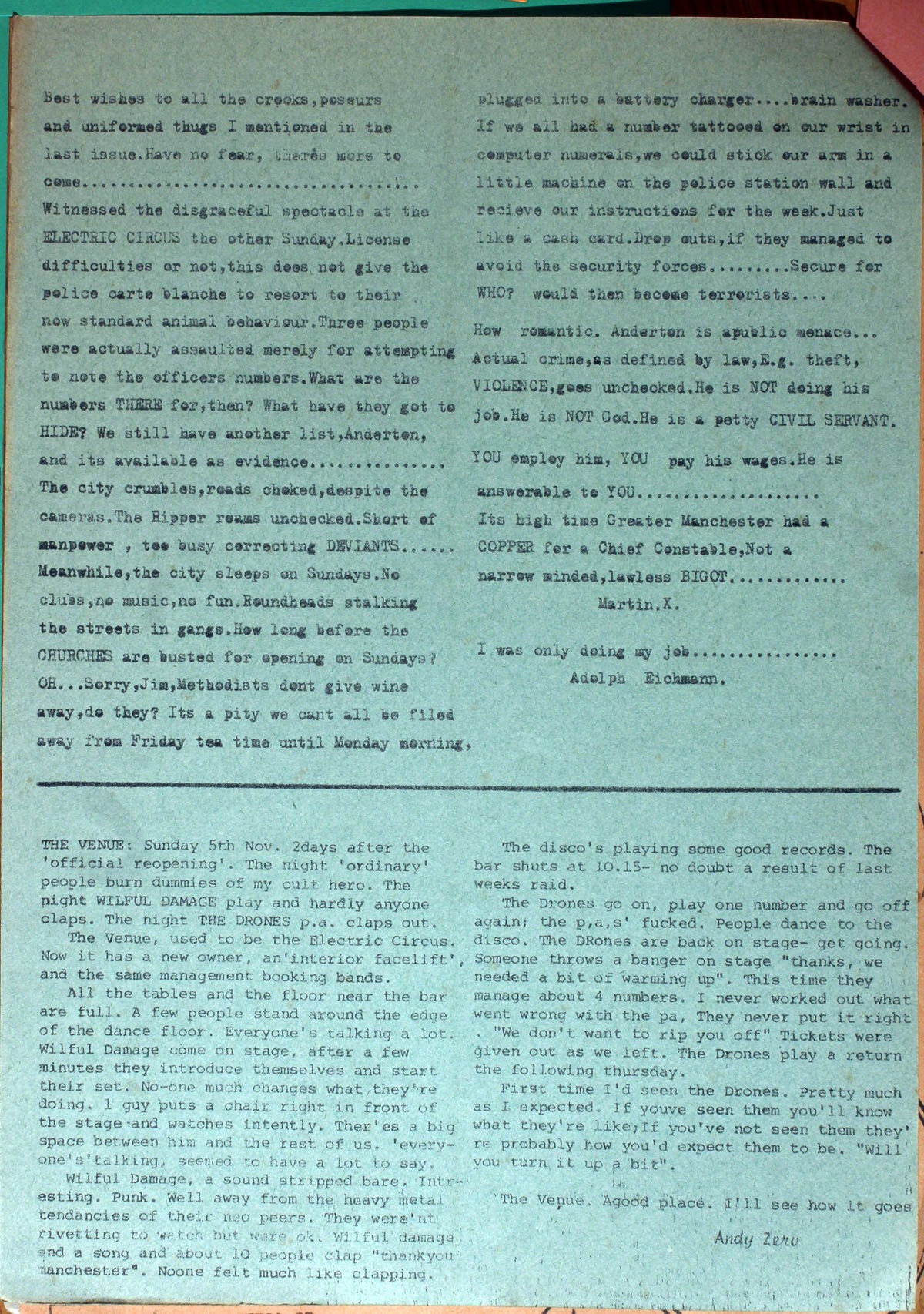 Best wishes to all the crooks,poseurs and uniformed thugs I mentioned in the last issue.Have no fear, there’s more to come……………………………..
Witnessed the disgraceful spectacle at the ELECTRIC CIRCUS the other Sunday.License difficulties or not, this does not give the police carte blanche to resort to their low standard animal behaviour. Three people were assaulted merely for attempting to note the officers numbers. What are the numbers THERE for, then? What have they got to HIDE? We still have another list, Anderton, and its available as evidence……
The city crumbles, roads choked, despite the cameras. The ripper roams unchecked. Short of manpower, too busy correcting DEVIANTS…… Meanwhile, the city sleeps on Sundays. No clubs, no music, no fun. Roundheads stalking the streets in gangs. How long before the CHURCHES are busted for opening on Sundays? I… Sorry, Jim, Methodists dont give wine away, do they? Its a pity we cant all be filed away from Friday tea time until Monday morning, plugged into a battery charger… brain washer. If we all had a number tattooed on our wrist in computer numerals, we could stick our arm in a little machine on the police station wall and recieve our instructions for the week. Just like a cash card. Drop outs, if they managed to avoid the security forces ….. Secure for WHO? would then become terrorists…
How romantic. Anderton is public menace… Actual crimes, as defined by law, E.g. theft, VIOLENCE, goes unchecked. He is NOT doing his job. He is NOT God. He is a petty CIVIL SERVANT. YOU employ him, YOU pay his wages. He is answerable to YOU….. Its high time Manchester had a COPPER for a Chief Constable, Not a narrow minded, lawless BIGOT………
Martin.X.
I was only doing my job……..
Adolph Eichmann.
THE VENUE: Sunday 5th Nov. 2 days after the ‘official reopening’. The night ‘ordinary’ people burn dummies of my cult hero. The (?)ght WILFUL DAMAGE play and hardly anyone claps. The night THE DRONES p.a. claps out. The Venue, use to be the Electric Circus. Now it has a new owner, an ‘interior facelift’, and the same management booking bands.
All the tables and the floor near the bar are full. A few people stand around the edge of the dance floor. Everyone’s talking a lot. Wilful Damage come on stage, after a few minutes they introduce themselves and start their set. No-one much changes what they’re doing. 1 guy puts a chair right in front of the stage and watches intently. Ther’es a big space between him and the rest of us. ‘every-(?)’s’ talking, seemed to have a lot to say. Wilful Damage, a sound stripped bare. Intr-(?)cing. Punk. Well away from the heavy metal tendancies of their neo peers. They weren’t rivetting to watch, but were ok. Wilful damage (?) a song and about 10 people clap “thankyou Manchester”. Noone felt much like clapping.
The disco’s playing some good records. The bar shuts at 10.15- no doubt a result of last weeks raid.
The Drones go on, play one number and go off again; the p.a.s’ fucked. People dance to the disco. The DRones are back on stage- get going. Someone throws a banger on stage “thanks, we needed a bit of warming up”. This time they manage about 4 numbers. I never worked out what went wrong with the pa, They never put it right. “We don’t want to rip you off” Tickets were given out as we left. The Drones play a return the following thursday.
First time I’d seen The Drones. Pretty much as I expected. If youve seen them you’ll know what they’re like; If you’ve not seen them they’re probably how you’d expect them to be. “Will you turn it up a bit”.
The Venue. Agood place. I’ll see how it goes.
Andy Zero

[This is a repeat of page five]