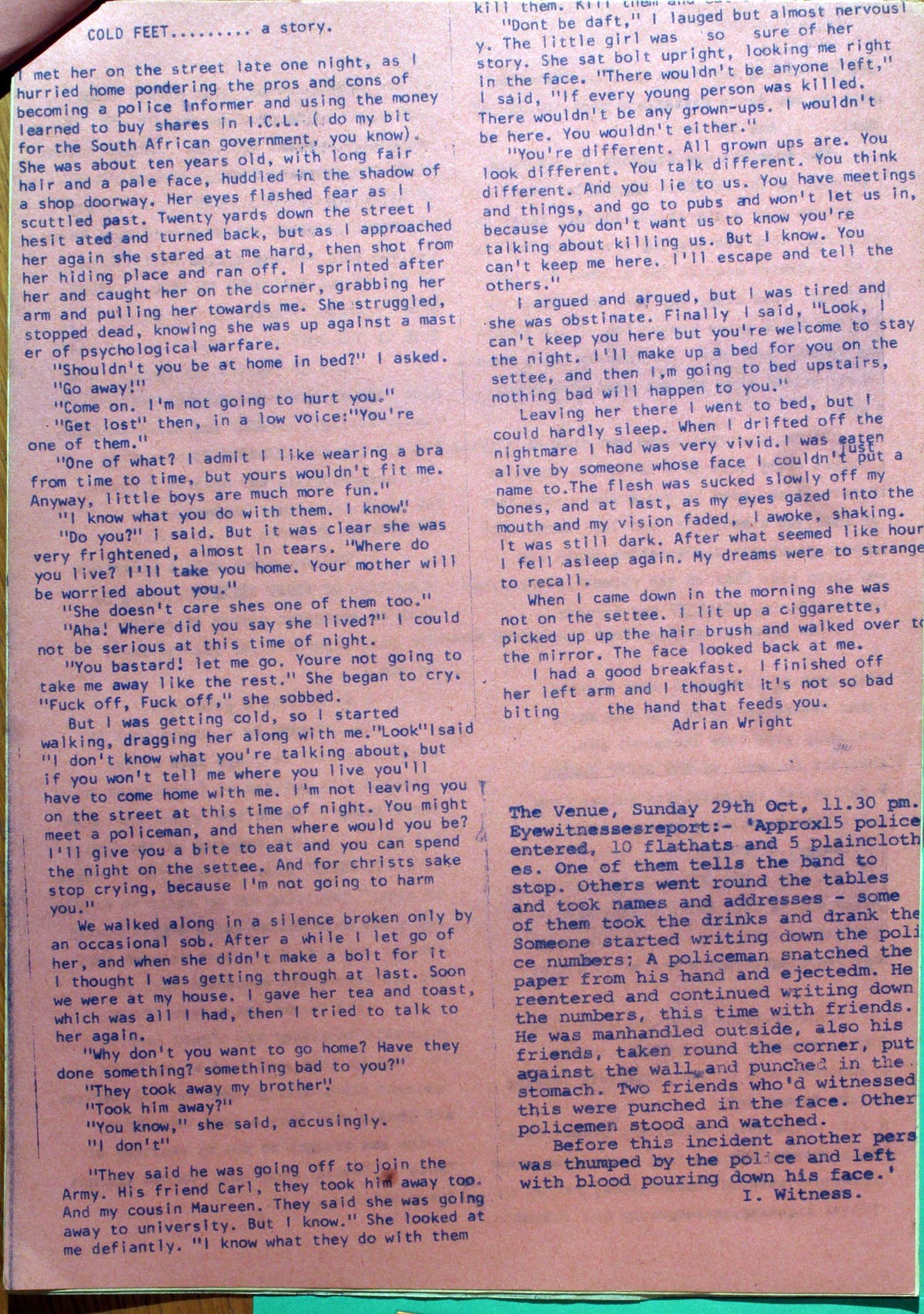 COLD FEET…….a story.
I met her on the street late one night, as I hurried home pondering the pros and cons of becoming a police informer and using the money I earned to buy shares in I.C.L. (I do my bit for the South African government, you know). She was about ten years old, with long fair hair and a pale face, huddled in the shadow of a shop doorway. Her eyes flashed fear as I scuttled past. Twenty years down the street I hesitated and turned back, but as I approached her again she stared at me hard, then shot from her hiding place and ran off. I sprinted after her and caught her on the corner, grabbing her arm and pulling her towards me . She struggled, stopped dead, knowing she was up against a master of psychological warfare.
“Shouldn’t you be at home in bed?” I asked.
“Go away!”
“Come on. I’m not going to hurt you.”
“Get lost” then, in a low voice: “You’re one of them.”
“One of what? I admit wearing a bra from time to time, but yours wouldn’t fit me. Anyway, little boys are much more fun.”
“I know what you do with them. I know.”
“Do you?” I said. But it was clear she was very frightened, almost in tears. “Where do you live? I’ll take you home. Your mother will be worried about you.”
“She doesn’t care shes one of them too.”
“Aha! Where did you say you lived?” I could not be serious at this time of night.
“You bastard! let me go. You’re not going to take me away like the rest.” She began to cry. “Fuck off, Fuck off,” she sobbed.
But I was getting cold, so I started walking, dragging her along with me. “Look” I said “I don’t know what you’re talking about, but if you won’t tell me where you live you’ll have to come home with me. I’m not leaving you on the street at this time of night. You might meet a policeman, and then where would you be? I’ll give you a bite to eat and you can spend the night on the settee. And for christs sake stop crying, because I’m not going to harm you.”
We walked along in a silence broken only by an occasional sob. After a while I let to of her , and when she didn’t make a bolt for it I thought I was getting through at last. Soon we were at my house. I gave her tea and toast, which was all I had, then I tried to talk to her again.
“Why don’t you want to go home? Have they done something? something bad to you?”
“They took away my brother.”
“Took him away?”
“You know,” she said, accusingly.
“I don’t”
“They said he was going off to join the Army. His friend Carl, they took him away too. And my cousin Maureen. They said she was going away to University. But I know. “ She looked at me defiantly. “I know what they do with them (?) kill them. Kill them and (?)
“Dont be daft,” I lauged but almost nervously. The little girl was so sure of her story. She sat bolt upright, looking me straight in the face. “There wouldn’t be anyone left,” I said, “If every young person was killed. There wouldn’t be any grown-ups. I wouldn’t be here. You wouldn’t either.”
“You’re different. All grown ups are. You look different. You talk different. You think different. And you lie to us. You have meetings and things, and go to pubs and won’t let us in, because you don’t want us to know you’re talking about killing us. But I know. You can’t keep me here. I’ll escape and tell the others.”
I argued and argued, but I was tired and she was obstinate. Finally I said, “Look, I can’t keep you here, but you’re welcome to stay the night. I’ll make a bed up for you on the settee, and then I, m going to bed upstairs, nothing bad will happen to you.”
Leaving her there I went to bed, but I could hardly sleep. When I drifted off the nightmare I had was very vivid. I was eaten alive by someone whose face I couldn’t just put a name to. The flesh was sucked slowly off my bones, and at last, as my eyes gazed into the mouth and my vision faded, I awoke, shaking. It was still dark. After what seemed like hours I fell asleep again. My dreams were to strange to recall.
When I came down in the morning she was not on the settee. I lit up a cigarette, picked up the hair brush and walked over to the mirror. The face looked back at me.
I had a good breakfast. I finished off her left arm and I thought it’s not so bad biting the hand that feeds you.
Adrian Wright

The Venue, Sunday 29th Oct, 11.30 pm.
Eyewitnessreport:- ‘Approx15 police entered, 10 flathats and 5 plainclothes. One of them tells the band to stop. Others went round the tables and took names and addresses – some of them took the drinks and drank them. Someone started writing down the police numbers; A policeman snatched the paper from his hand and ejectedm. He reentered and continued writing down the numbers, this time with friends. He was manhandled outside, also his friends, taken round the corner, put against the wall, and punched in the stomach. Two friends who’d witnessed this were punched in the face. Other policemen stood and watched.
Before this incident another person was thumped by the police and left with blood pouring down his face.’
I. Witness.