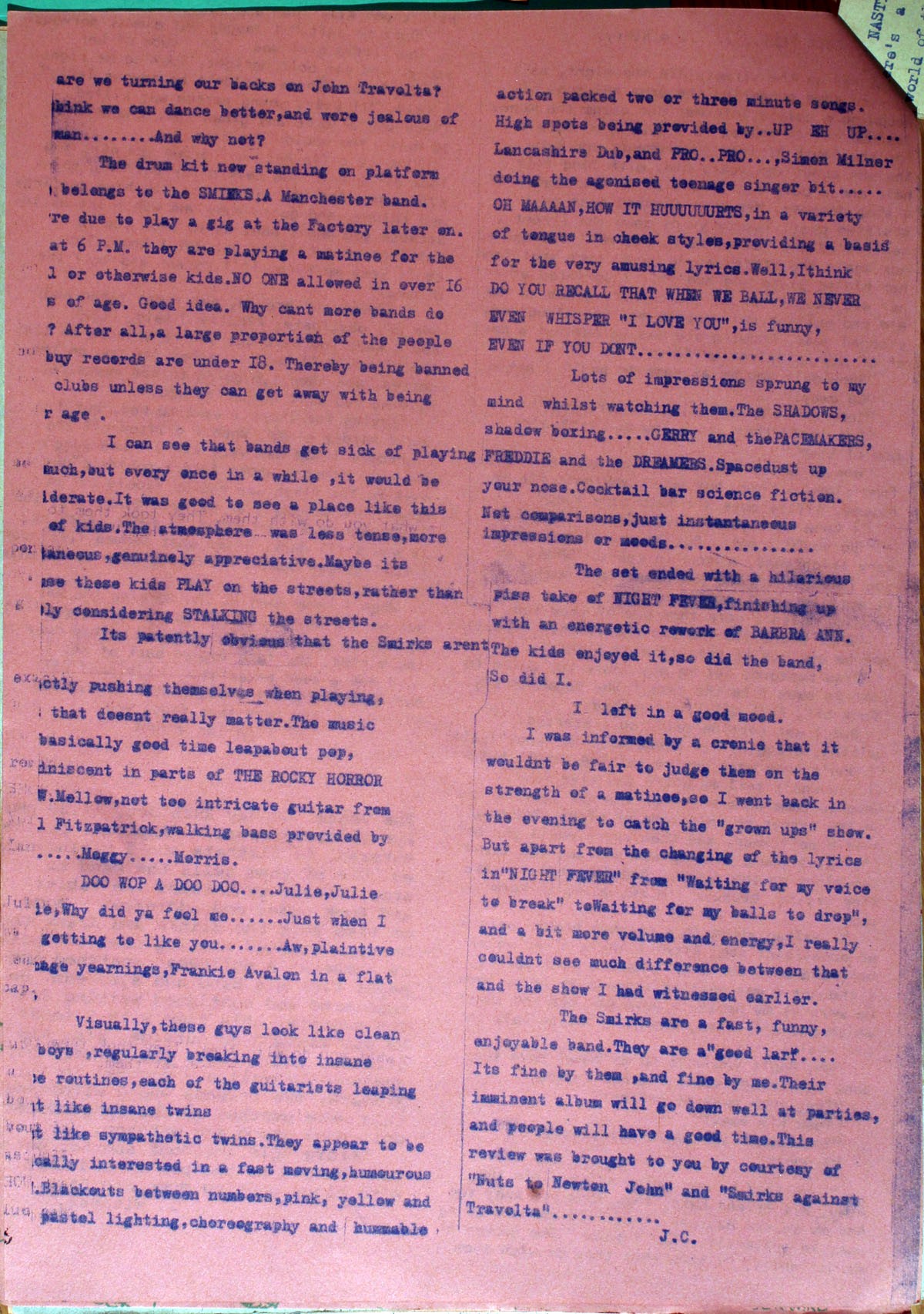 are we turning our backs on John Travolta? think we can dance better, and were jealous of man…. And why not?
The drum kit now standing on platform (?) belongs to THE SMIRKS. They’re due to play a gig at the Factory later on. (?) at 6 P.M. they are playing a matinee for the (?)l or otherwise kids. NO ONE allowed in over 16 years of age. Good idea. Why can’t more bands do this? After all, a large proportion of the people who buy records are under 18. Thereby being banned from clubs unless they can get away with being (?)r age.
I can see that bands get sick of playing (?) much but every once in a while, it would be considerate. It was good to see a place like this full of kids. The atmosphere was less tense, more spontaneous, genuinely appreciative. Maybe its because these kids PLAY on the streets rather than (?)ly considering STALKING the streets.
It’s patently obvious that The Smirks aren’t exactly pushing themselves when playing, but that doesnt really matter. The music is basically good time leapabout pop, reminiscent in parts of THE ROCKY HORROR SHOW. Mellow, not too intricate guitar from Neil Fitzpatrick, walking bass provided by Ian… Moggy… Morris.
DOO WOP A DOO DOO….Julie, Julie, Julie, Why did ya fool me… Just when I was getting to like you… Aw, plaintive teenage yearnings, Frankie Avalon in a flat cap.
Visually, these guys look like clean boys, regularly breaking into insane dance routines, each of the guitarists leaping about like insane twins (?)t like sympathetic twins. They appear to be (?)cally interested in a fast moving, humourous (?). Blackouts between numbers, pink, yellow and pastel lighting and hummable action packed two or three minute songs. High spots being provided by..UP EH UP…. Lancashire Dub, and PRO..PRO…,Simon Milner doing the agonised teenage singer bit….. OH MAN, HOW IT HUUUUUURTS, in a variety of tongue in cheek styles, providing a basis for the very amusing lyrics. Well, I think DO YOU RECALL THAT WHEN WE BALL, WE NEVER EVEN WHISPER “I LOVE YOU” is funny, EVEN IF YOU DON’T……………………….
Lots of impressions sprung to my mind whilst watching them. The SHADOWS, shadow boxing….. GERRY and the PACEMAKERS, FREDDIE and the DREAMERS. Spacedust up your nose. Cocktail bar science fiction. Not comparisons, just instantaneous impressions or moods………
The set ended with a hilarious piss take of NIGHT FEVER, finishing up with an energetic rework of BARBRA ANN. The kids enjoyed it, so did the band. So did I.
I left in a good mood. I was informed by a cronie that it wouldn’t be fair to judge them on the strength of a matinee, so I went back in the evening to catch the “grown ups” show. But apart from the changing of the lyrics in “NIGHT FEVER” from “Waiting for my voice to break” toWaiting for my balls to drop”, and a bit more volume and energy, I really couldnt see much difference between that and the show I had witnessed earlier.
The Smirks are a fast, funny, enjoyable band. They are “a good larf…. It’s fine by them ,and fine by me. Their imminent album will go down well at parties, and people will have a good time. This review was brought to you courtesy of “Nuts to Newton John” and “Smirks against Travolta”……..
J.C.