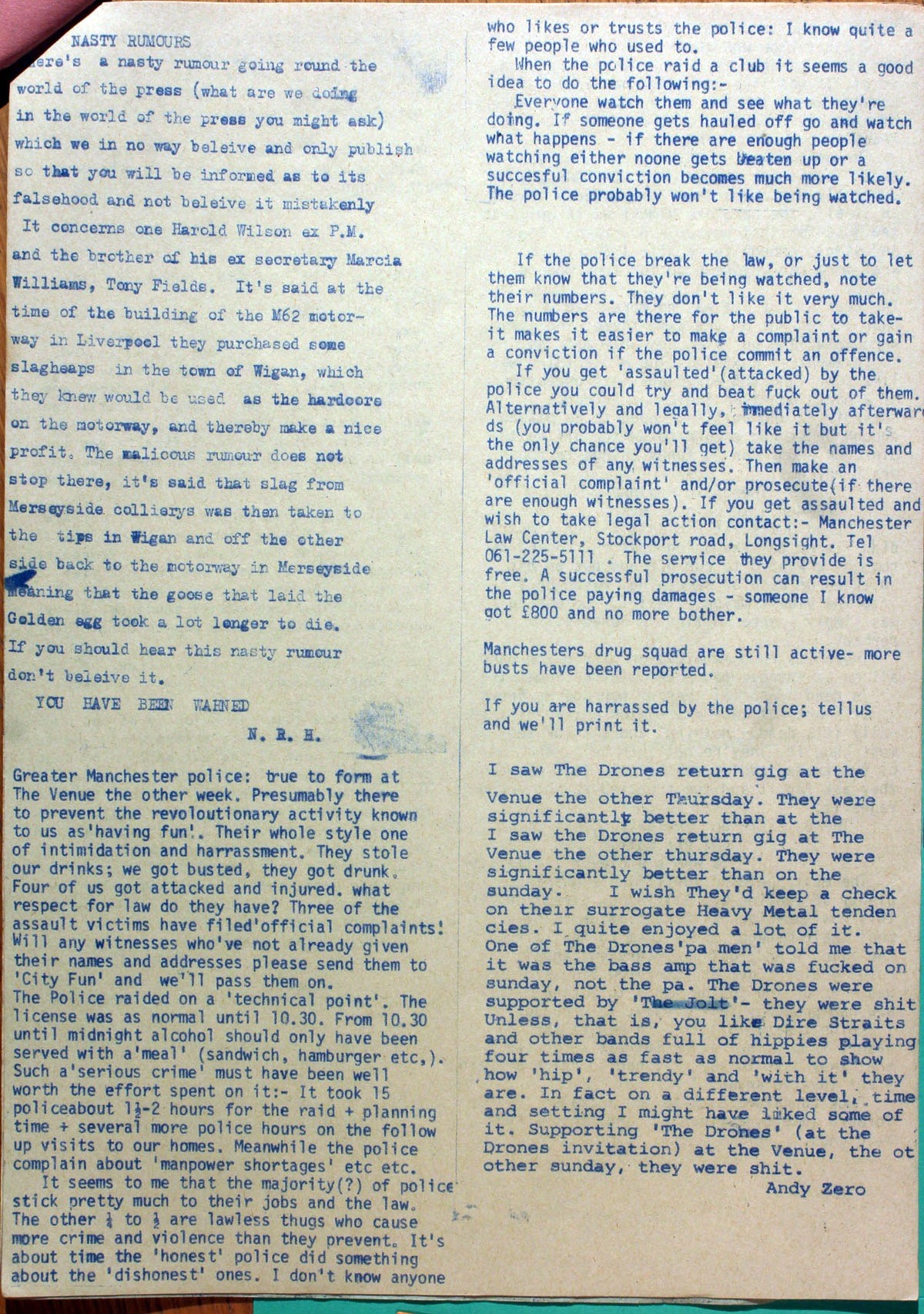 NASTY RUMOURS
There’s a nasty rumour going round the world of the press (what are we doing in the world of the press you might ask) which we in no way believe and only publish so that you will be informed as to its falsehood and not believe it mistakenly
It concerns one Harold Wilson ex P.M. and the brother of his ex secretary Marcia Williams, Tony Fields. It’s said at the time of the building of the M62 motorway in Liverpool they purchased some slagheaps in the town of Wigan, which they knew would be used as the hardcore on the motorway, and thereby make a nice profit. The malicious rumour does not stop there, it’s said that slag from Merseyside collierys was then taken to the tips in Wigan and off the other side back to the motorway in Merseyside. Meaning that the goose that laid the golden egg took a lot longer to die. If you should hear this nasty rumour don’t believe it.
YOU HAVE BEEN WARNED
N.R.H.

Greater Manchester Police: true to form at The Venue the other week. Presumably there to prevent the revolutionary activity known to us as ‘having fun’. Their whole style one of intimidation and harassment. They stole our drinks; we got busted, they got drunk. Four of us got attacked and injured. what respect for law and order do they have? Three of the assault victims have filed ‘official complaints’. Will any witnesses who’ve not already given their names and addresses please send them to ‘City Fun’ and we’ll pass them on.
The Police raided on a ‘technical point’. The license was as normal until 10.30. From 10.30 until midnight alcohol should only have been served with a ‘meal’ (sandwich, hamburger etc,). Such a ‘serious crime’ must have been well worth the effort spent on it:- It took 15 policeabout 1 ½ -2 hours for the raid + planning time + several more police hours on the follow up visits to our homes. Meanwhile the police complain about ‘manpower shortages’ etc etc.
It seems to me that the majority(?) of police stick pretty much to their jobs and the law. The other ¼ to ½ are lawless thugs who cause more crime and violence than they prevent. It’s about time the ‘honest’ police did something about the ‘dishonest’ ones. I don’t know anyone who likes or trusts the police: I know quite a few people who used to.
When the police raid a club it seems a good idea to do the following:-
Everyone watch them and see what they’re doing. If someone gets hauled off go and watch what happens – if there are enough people watching either noone gets beaten up or a succesful conviction becomes more likely. The police probably won’t like being watched.
If the police break the law, or just to let them know that they’re being watched, note their numbers. They don’t like it very much. The numbers are there for the public to take- it makes it easier to make a complaint or gain a conviction if the police commit an offence.
If you get ‘assaulted’ (attacked) by the police you could try and beat fuck out of them. Alternatively and legally, immediately afterwards (you probably won’t feel like it, but it’s the only chance you’ll get) take the names and addresses of any witnesses. Then make an ‘official complaint’ and/or prosecute (if there are enough witnesses). If you get assaulted and wish to take legal action contact:- Manchester Law Center, Stockport road, Longsight. Tel 061-225-511. The service they provide is free. A successful prosecution can result in the police paying damages – someone I know got £800 and no more bother.
Manchesters drug squad are still active – more busts have been reported.
If you are harrassed by the police; tellus and we’ll print it.