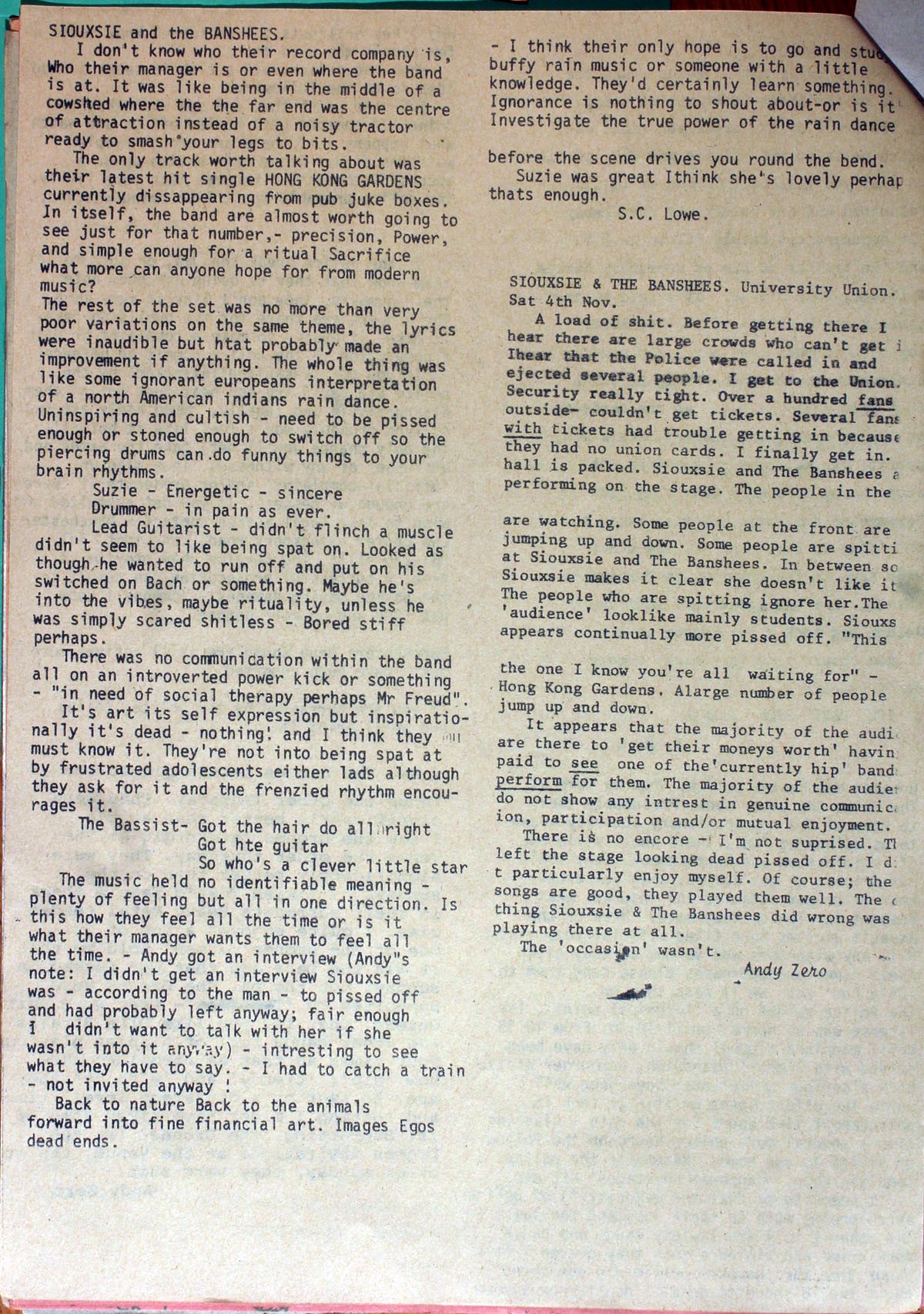 SIOUXSIE AND THE BANSHEES.
I don’t know who their record company is, Who their manager is or even where the band is at. It was like being in the middle of a cowshed where the far end was the centre of attraction instead of a noisy tractor ready to smash your legs to bits.
The only track worth talking about was their latest hit single HONG KONG GARDENS currently dissappearing from pub juke boxes. In itself, the band are almost worth going to see just for that number ,- precision, Power, and simple enough for a ritual Sacrifice what more can anyone hope for from modern music?
The rest of the set was no more than very poor variations on the same them, the lyrics were inaudible but htat probably made an improvement if anything. The whole thing was like some ignorant europeans interpretation of a north American Indians rain dance. Uninspiring and cultish – need to be pissed enough or stoned enough to switch off so the piercing drums can do funny things to your brain rhythms.
Suzie – Energetic – sincere
Drummer – In pain as ever.
Lead Guitarist – didn’t flinch a muscle didn’t seem to like being spat on. Looked as though he wanted to run off and put on his switched on Bach or something. Maybe he’s into the vibes, maybe rituality, unless he was simply scared shitless – Bored stiff perhaps.
There was no communication within the band all on an introverted power kick or something – “in need of social therapy perhaps Mr Freud”. It’s art its self expression but inspirationally it’s dead – nothing! and I think they must know it. They’re not into being spat at by frustrated adolescents either lads although they ask for it and the frenzied rhythm encourages it.
The Bassist – Got the hair do all right, got the guitar, So who’s a clever little star.
The music held no identifiable meaning – plenty of feeling but all in one direction. Is this how they feel all the time or is it what their manager wants them to feel all the time. – Andy got an interview (Andy”s note: I didn’t get an interview Siouxsie was – according to the man – to pissed off and had probably left anyway; fair enough I didn’t want to talk to her if she wasn’t into it anyway) – interesting to see what they have to say. – I had to catch a train – not invited anyway!
Back to nature Back to the animals forward into fine financial art. Images Egos dead ends.
- I think their only hope is to go and study buffy rain music or someone with a little knowledge. They’d certainly learn something. Ignorance is nothing to shout about-or is it Investigate the true power of the rain dance before the scene drives you round the bend. Suzie was great Ithink she’s lovely perhaps that’s enough.
S.C. Lowe

SIOUXSIE & THE BANSHEES. University Union. Sat 4th Nov.
A load of shit. Before getting there I hear there are large crowds who can’t get in. Ihear that the Police were called in and ejected several people. I get to the Union. Security really tight. Over a hundred fans outside- couldn’t get tickets. Several fans with tickets had trouble getting in because they had no union cards. I finally get in. hall is packed. Siouxise and the Banshees are performing on the stage. The people in the (?) are watching. Some people at the front are jumping up and down. Some people are spitting at Siouxsie and the Banshees. In between songs Siouxsie makes it clear she doesn’t like it. The people who are spitting ignore her. The ‘audience’ looklike mainly students. Siouxise appears continually more pissed off. “This is the one I know you’re all waiting for” – Hong Kong Gardens. Alarge number of people jump up and down.
It appears that the majority of the audience are there to ‘get their moneys worth’ having paid to see one of the’currently hip’ bands perform for them. The majority of the audience do not show any interest in genuine communication, participation and/or mutual enjoyment.
There is no encore – I’m not surprised. They left the stage looking dead pissed off. I didn’t particularly enjoy myself. Of course; the songs are good, they played them well. The only thing Siouxsie and the Banshees did wrong was playing there at all.
The ‘occasion’ wasn’t.
Andy Zero