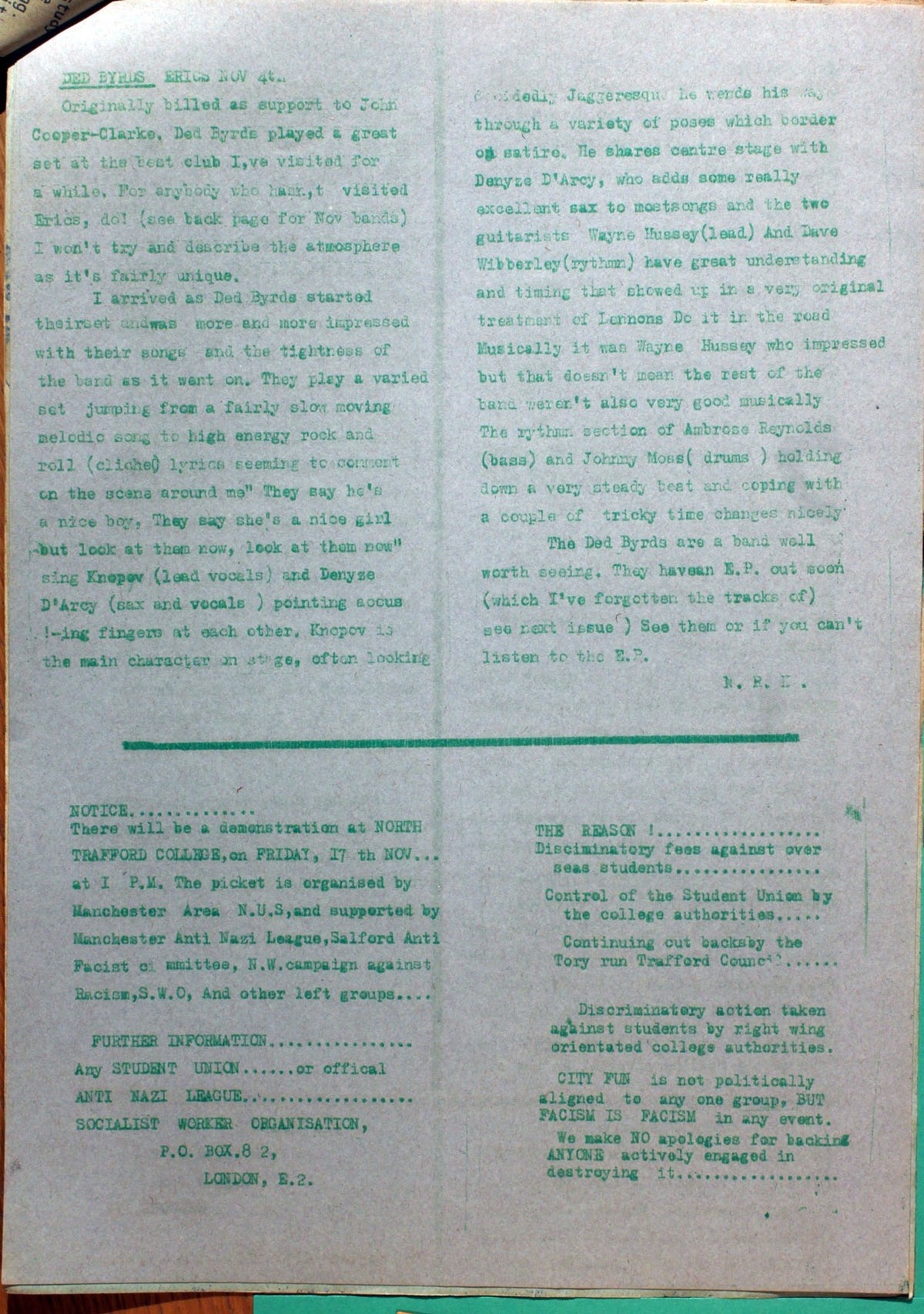 DED BYRDS ERIC NOV 4th
Originally billed as support to John Cooper-Clarke, Ded Byrds played a great set at the best club I’ve visited for a while. For anybody who hasn,t visited Erics, do! (see back page for Nov bands) I won’t try and describe the atmosphere as it’s fairly unique.
I arrived as Ded Byrds started theirset andwas more and more impressed with their songs and the tightness of the band as it went on. They play a varied set jumping from a fairly slow moving melodic song to high energy rock and roll (cliche() lyrics seeming to comment on the scene around me” They say he’s a nice boy, They say she’s a nice girl but look at them now, look at them now” sing Knopov (lead vocals) and Denyze D’Arcy (sax and vocals) pointing accusing fingers at each other. Knopov is the main character on stage, often looking decidedly Jaggeresque he wends his way through a variety of poses which border on satire. He share centre stage with Denyze D’Arcy, who adds some really excellent sax to mostsongs and the guitarists Wayne Hussey (lead) And Dave Wibberley (rythmn) have great understanding and timing that showed up in a very original treatment of Lennons Do it in the road Musically it was Wayne Hussey who impressed but that doesn’t mean the rest of the band weren’t also very good musically The rythmn section of Ambrose Reynolds (bass) and Johnny Moss(drums) holding down a very steady beat and coping with a couple of trick time changes nicely
The Ded Byrds are a band well worth seeing. They havean E.P. out soon (which I’ve forgotten the tracks of) see next issue) See them or if you can’t listen to the E.P.
N.R.H.

NOTICE……
… at 1 P.M. The picket is organised by Manchester area N.U.S, and supported by Manchester Anti Nazi League, Salford Anti Facist Committee, N.W. campaign against Racism,S.W.O, and other left groups….
FURTHER INFORMATION………..
Any STUDENT UNION….or official ANTI NAZI LEAGUE……………….. SOCIALIST WORKER ORGANISATION, P.O. BOX 8 2, LONDON E.2.
THE REASON!....................
Discriminatory fees against overseas students…………
Control of the Student Union by the college authorities…..
Continuing cut backsby the Tory run Trafford Council…
Discriminatory action taken against students by right wing orientated college authorities.
CITY FUN is not politically aligned to any one group, BUT FACISM IS FACISM in any event. We make NO apologies for backing ANYONE actively engaged in destroying it……………………..