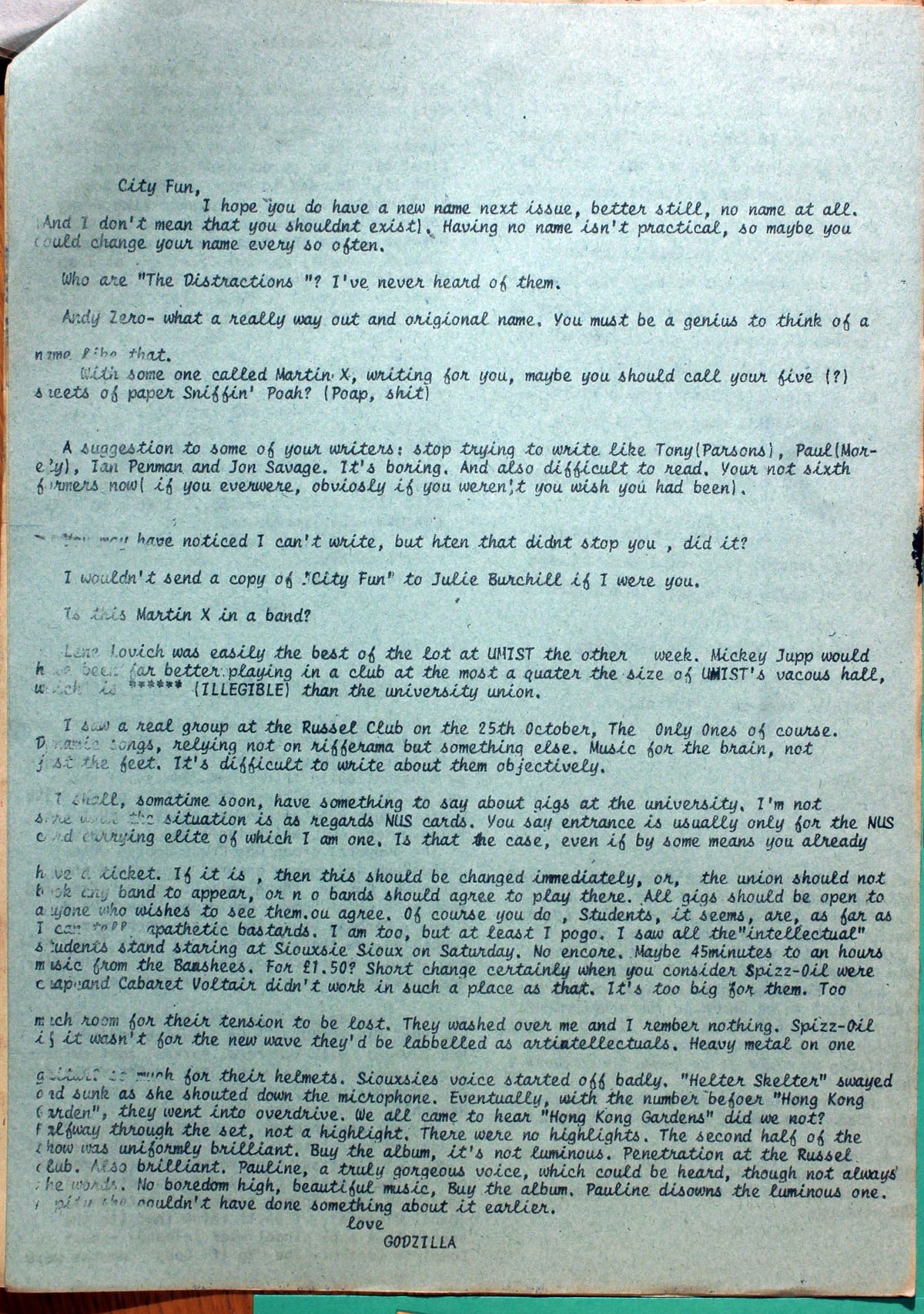 City Fun,
I hope you do have a new name next issue, better still, no name at all. And I don’t mean that you shouldn’t exist). Having no name isn’t practical, so maybe you could change your name every so often?
Who are “The Distractions “? I’ve never heard of them.
Andy Zero- what a really way out and origional name. You must be a genius to think of a name like that.
With someone called Martin X, writing for you, maybe you should call your five(?) sheets of paper Sniffin’ Poah? (Poap, shit)
A suggestion to some of your writers: stop trying to write like Tony (Parsons), Paul(Morley), Ian Penman and Jon Savage. It’s boring. And also difficult to read. Your not sixth formers now ( if you everwere, obviosly if you were’,nt you wish you had been).
You may have noticed I can’t write, but hten that didn’t stop you , did it?
I wouldn’t send a copy of ‘City Fun’ to Julie Burchill if I were you.
Is this Martin X in a band?
Lene Lovich was easily the best of the lot at UMIST the other week. Mickey Jupp would have been far better playing at a club at the most a quater the size of UMIST’s vacuous hall, which is ********* (ILLEGIBLE) than the university union.
I saw a real group at the Russel Club on the 25th October, The Only Ones of course. Dynamic songs, relying not on rifferama but something else. Music for the brain, not just the feet. It’s difficult to write about them objectively.
I shall, somatime soon, have something to say about gigs at the university. I’m not sure what the situation is as regards NUS cards. You say entrance is usually only for the NUS card carrying elite of which I am one. Is that the case, even if by some means you already have a ticket. If it is, then this should be changed immediately, or, the union should not book any band to appear, or no bands should agree to play there. All gigs should be open to anyone who wishes to see them. ou agree. Of course you do , Students, it seems, are, as far as I can tell apathetic bastards. I am too, but at least I pogo. I saw all the”intellectual” students staring at Siouxsie Sioux on Saturday. No encore. Maybe 45minutes to an hours music from the Banshees. For £1.50? Short change certainly when you consider Spizz-Oil were crap and Cabaret Voltair didn’t work in such a place as that. It’s too big for them. Too much room for their tension to be lost. They washed over me and I rember nothing. Spizz-Oil if it wasn’t for the new wave they’d be labbelled as antintellectuals. Heavy metal on one guitar as much for their helmets. Siouxsie’s voice started off badly. “Helter Skelter” swayed and sunk as she shouted down the microphone. Eventually, with the number befoer “Hong Kong Garden”, they went into overdrive. We all came to hear “Hong Kong Gardens” did we not? Halfway through the set, not a highlight. There were no highlights. The second half of the show was uniformly brilliant. Buy the album, it’s not luminous. Penetration at the Russel Club. Also brilliant. Pauline, a truly gorgeous voice, which could be heard, thought not always the words. No boredom high, beautiful music. Buy the album. Pauline disowns the luminous one. A pity she couldn’t have done something about it earlier.
Love
GODZILLA