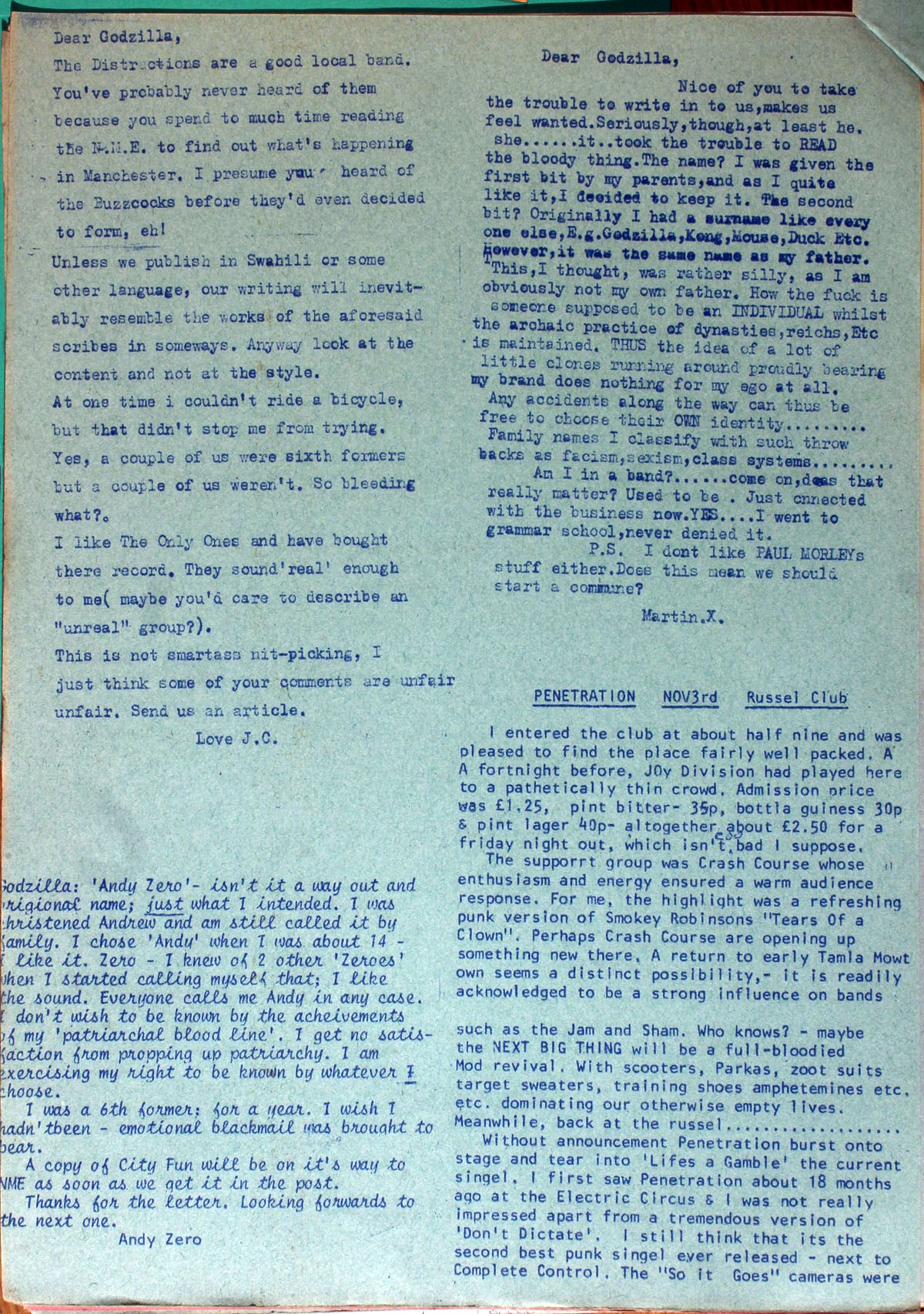 Dear Godzilla,
The Distractions are a good local band. You’ve probably never heard of them because you spend to much time reading the N.M.E. to find out what’s happening in Manchester. I presume you’d heard of the Buzzcocks before they’d even decided to form, eh!
Unless we publish in Swahili or some other language, our writing will inevitably resemble the works of the aforesaid scribes in someways. Anyway look at the content and not at the style.
At one time i couldn’t ride a bicycle, but that didn’t stop me from trying. Yes, a couple of us were sixth formers, but a couple of us weren’t. So bleeding what?
I like The Only Ones and have bought their record. They sound ‘real’ enough to me( maybe you’d care to describe an “unreal” group?).
This is not smartass nit-picking, I just think some of your comments are unfair unfair. Send us an article.
Love J.C.

Godzilla: ‘Andy Zero’ – isn’t it a way out and origional name; just what I intended. I was christened Andrew and am still called it by family. I chose ‘Andy’ when I was about 14 – I like it. Zero – I knew of 2 other ‘Zeroes’ when I started calling myself that; I like the sound. Everyone calls me Andy in any case. I don’t wish to be known by the acheivements of my ‘patriarchal blood line’. I get no satisfaction from propping up patriarchy. I am exercising my right to be known by whatever I choose.
I was a 6th former; for a year. I wish I hadn’t been – emotional blackmail was brought to bear.
A copy of City Fun will be on it’s way to NME as soon as we get it in the post.
Thanks for the letter. Looking forwards to the next one.
Andy Zero.

Dear Godzilla,
Nice of you to take the trouble to write in to us, makes us feel wanted. Seriously, though, at least he. she….it… took the trouble to READ the bloody thing. The name? I was given the first bit by my parents, and as I quite like it, I decided to keep it. The second bit? Originally I had a surname like every one else, E.g. Godzilla,Kong,Mouse,Duck Etc. However, it was the same name as my father. This, I thought, was rather silly, as I am obviously not my own father. How the fuck is someone supposed to be an INDIVIDUAL whilst the archaic practice of dynasties,reichs,Etc is maintained. THUS the idea of a lot of little clones running around proudly bearing my brand does nothing for my ego at all. Any accidents along the way can thus be free to choose their OWN identity……
Family names I classify with such throw backs as facism,sexism,class systems………..
Am I in a band?....... come on, does that really matter? Used to be. Just connected with the business now.YES….I went to grammar school,never denied it.
P.S. I don’t like PAUL MORLEYs stuff either. Does this mean we should start a commune?
Martin.X.

PENETRATION NOV3rd Russel Club
I entered the club at about half nine and was pleased to find the place fairly well packed. A A fortnight before, JOy Division had played here to a pathetically thin crowd. Admission price was £1.25, pint bitter – 35p, bottla guiness 30p & pint lager 40p – altogether about £2.50 for a friday night out, which isn’t too bad, I suppose.
The supporrt group was Crash Course whose enthusiasm and energy ensured a warm audience response. For me, the highlight was a refreshing punk version of Smokey Robinsons “Tears Of a Clown”. Perhaps Crash Course are opening up something new there. A return to early Tamla Mowtown seems a distinct possibility,- it is readily acknowledged to be a strong influence on bands such as The Jam and Sham. Who knows? – maybe THE NEXT BIG THING will be a full-bloodied Mod revival. With scooters, Parkas, zoot suits target sweaters, training shoes amphetemines etc. etc. dominating our otherwise empty lives. Meanwhile back at the russel………….
Without announcement Penetration burst onto stage and tear into ‘Lifes a Gamble’ the current singel. I first saw Penetration about 18 months ago at the Electric Circus & I was not really impressed apart from a tremendous version of ‘Don’t Dictate’. I still think that its the second best punk singel ever released – next to Complete Control. The “So It Goes” cameras were