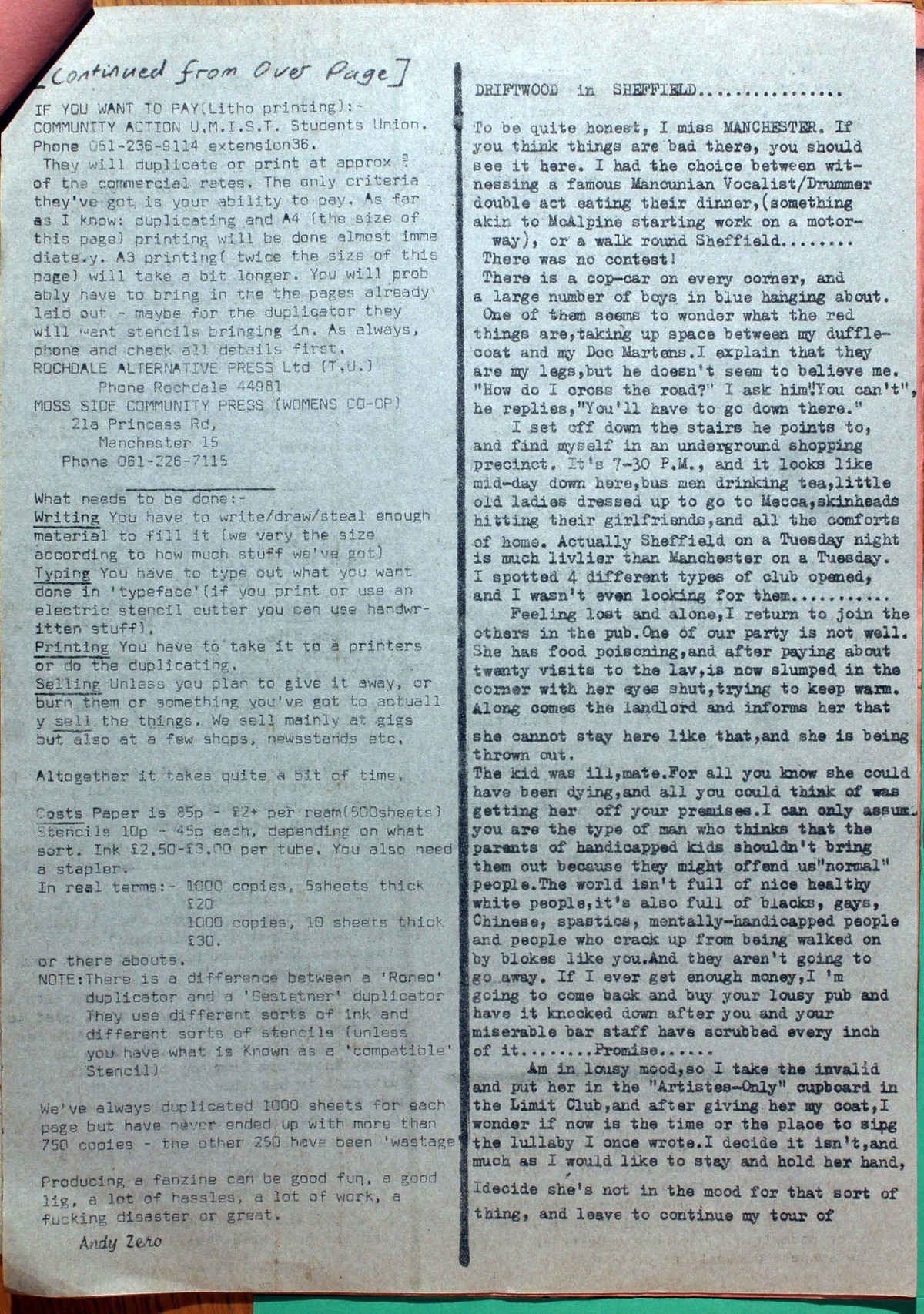 [continued from over page]
IF YOU WANT TO PAY(Litho printing):-
COMMUNITY ACTION U.M.I.S.T. Students' Union. Phone 061-236-9114 extension36.
They will duplicate or print at approx 3/4 of the commercial rates. The only criteria they've got is your ability to pay. As far as I know: duplicating and A4 (the size of this page) will be done almost immediately. A3 printing (twice the size of this page) will take a bit longer. You will probably have to bring in the pages already laid out - maybe for the duplicator they will want stencils bringing in. As always, phone and check all details first.
ROCHDALE ALTERNATIVE PRESS Ltd (T.U.) Phone Rochdale 44981
MOSS SIDE COMMUNITY PRESS (WOMENS CO-OP) 21a Princess Rd, Manchester 15 Phone 061-226-7115
What needs to be done:-
Writing You have to write/draw/steal enough material to fill it (we vary the size according to how much stuff we've got)
Typing You have to type out what you want done in 'typeface' (if you print or use an electric stencil cutter you can use handwritten stuff).
Printing You have to take it to a printers or do the duplicating.
Selling Unless you plan to give it away, or burn it or something you've got to actually sell the things. We sell mainly at gigs but also at a few shops, newsstands etc.
Altogether it takes quite a bit of time.
Costs Paper is 85p - £2+ per ream (500 sheets) Stencils 10p-45p each, depending on what sort. Ink £2.50-£3.00 per tube. You also need a stapler.
In real terms:- 1000 copies, 5sheets thick £20
1000 copies, 10 sheets thick £30.
or there abouts.
NOTE: There is a difference between a 'Roneo' duplicator and a 'Gestetner' duplicator They use different sorts of stencils (unless you have what is Known as a 'compatible' Stencil)
We've always duplicated 1000 sheets for each page but have never ended up with more than 750 copies - the other 250 have been 'wastage'
Producing a fanzine can be good fun, a good lig, a lot of hassles, a lot of work, a fucking disaster or great.
Andy Zero

DRIFTWOOD IN SHEFFIELD..........
To be quite honest, I miss MANCHESTER. If you think things are bad there, you should see it here. I had the choice between witnessing a famous Mancunian Vocalist/Drummer double act eating their dinner, (something akin to McAlpine starting work on a motorway), or a walk around Sheffield..... There was no contest!
There is a cop-car on every corner, and a large number of boys in blue hanging about. One of them seems to wonder what the red things are,taking up space between my duffle-coat and my Doc Martens. I explain that they are my legs, but he doesn't seem to believe me. "How do I cross the road?" I ask him. "You can't", he replies, "You'll have to go down there."
I set off down the stairs he points to, and find myself in an underground shopping precinct. It's 7.30 P.M., and it looks like mid-day down here,bus men drinking tea,little old ladies dressed up to go to Mecca,skinheads hitting their girlfriends, and all the comforts of home. Actually Sheffield on a Tuesday night is much livlier than Manchester on a Tuesday. I spotted 4 different types of club opened, and I wasn't even looking for them.........
Feeling lost and alone, I return to join the others in the pub. One of our party is not well. She has food poisoning, and after paying about twenty visits to the lav, is now slumped in the corner with her eyes shut, trying to keep warm. Along comes the landlord and informs her that she cannot stay here like that,and she is being thrown out.
The kid was ill,mate.For all you know she could have been dying,and all you could think of was getting her off your premises. I can only assume you are the type of man who thinks that the parents of handicapped kids shouldn't bring them out because they might offend us "normal" people. The world isn't full of nice healthy white people, it's also full of blacks, gays, Chinese, spastics, mentally-handicapped people and people who crack up from being walked on by blokes like you. And they aren't going to go away. If I ever get enough money,I 'm going to come back and buy your lousy pub and have it knocked down after you and your miserable bar staff have scrubbed every inch of it............Promise...........
Am in a lousy mood, so I take the invalid and put her in the "Artistes-Only" cupboard in the Limit Club,and after giving her my coat, I wonder if now is the time or the place to sing the lullaby I once wrote. I decide it isn't,and much as I would like to stay and hold her hand, Idecide she's not in the mood for that sort of thing, and leave to continue my tour of