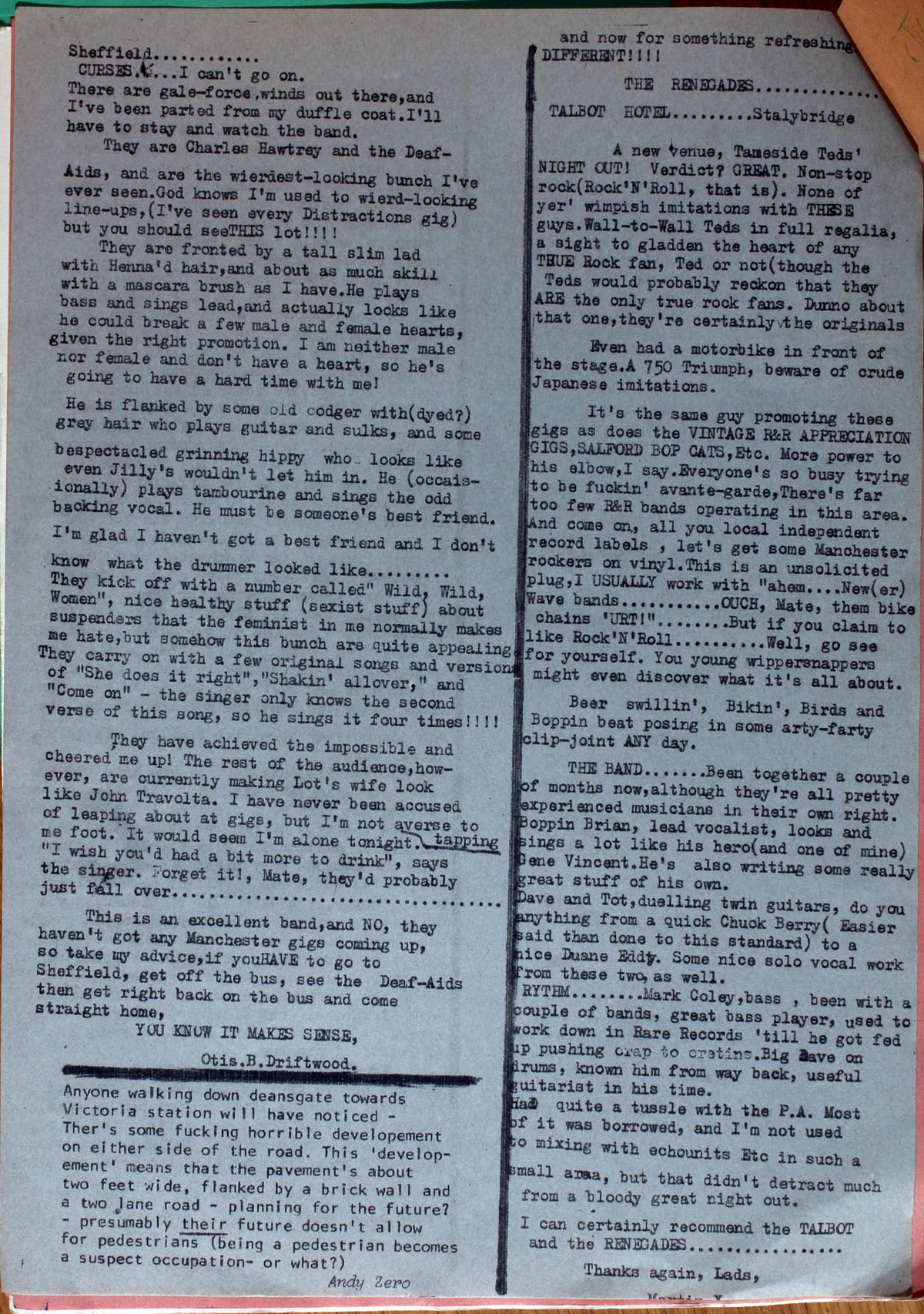 Sheffield.....
CURSES....I can't go on.
There are gale-force winds out there,and I've been parted from my duffle coat.I'll have to stay and watch the band.
They are Charles Hawtrey and the Deaf-Aids and they are the wierdest-looking bunch I've ever seen.God knows I'm used to wierd-looking line-ups,(I've seen every Distractions gig) but you should seeTHIS lot!!!!
They are fronted by a tall slim lad with Henna'd hair,and about as much skill with a mascara brush as I have.He plays bass and sings lead, and actually looks like he could break a few male and female hearts, given the right promotion. I am neither male nor female and don't have a heart, so he's going to have a hard time with me!
He is flanked by some old codger with(dyed?) grey hair who plays guitar and sulks, and some bespectacled grinning hippy who looks like even Jilly's wouldn't let him in. He (occasionally) plays tambourine and sings the odd backing vocal. He must be someone's best friend. I'm glad I haven't got a best friend and I don't know what the drummer looked like......
They kick off with a number called "Wild, Wild, Women", nice healthy stuff (sexist stuff) about suspenders that the feminist in me normally makes me hate,but somehow this bunch are quite appealing. They carry on with a few original songs and versions of "She does it right", "Shakin' allover," and "Come on" - the singer only knows the second verse of this song, so he sings it four times!!!!
They have achieved the impossible and cheered me up! The rest of the audience, however, are making Lot's wife look like John Travolta. I have never been accused of leaping about at gigs, but I'm not averse to tapping me foot. It would seem I'm alone tonight. "I wish you'd had a bit more to drink", says the singer. Forget it!, Mate, they'd probably just fall over...........
This is an excellent band,and NO, they haven't got any Manchester gigs coming up, so take my advice,if youHAVE to go to Sheffield, get off the bus, see the Deaf-Aids then get right back on the bus and come straight home.
YOU KNOW IT MAKES SENSE,
Otis.B.Driftwood

Anyone walking down Deansgate towards Victoria station will have noticed - Ther's some fucking horrible developement on either side of the road. This 'developement' means that the pavement's about two feet wide, flanked by a brick wall and a two land road - planning for the future? - presumably their future doesn't allow for pedestrians (being a pedestrian becomes a suspect occupation - or what?)
Andy Zero

and now for something refreshingly DIFFERENT!!!!
THE RENEGADES......
TALBOT HOTEL.........Stalybridge
A new venue, Tameside Teds' NIGHT OUT! Verdict? GREAT. Non-stop rock(Rock'N'Roll, that is). None of yer' wimpish imitations with THESE guys. Wall-to-Wall Teds in full regalia, a sight to gladden the heart of any TRUE Rock fan, Ted or not(though the Teds would probably reckon that they ARE the only true rock fans. Dunno about that one, they're certainly the originals
Even had a motorbike in front of the stage.A 750 Triumph, beware of crude Japanese imitations.
It's the same guy promoting these gigs as does the VINTAGE R&R APPRECIATION GIGS,SALFORD BOP CATS,Etc. More power to his elbow, I say.Everyone's so busy trying to be fuckin' avant-garde,There's far too few R&R bands operating in this area. And come on, all you local independent record labels , let's get some Manchester rockers on vinyl.This is an unsolicited plug,I USUALLY work with "ahem ....New(er) Wave bands.......OUCH, Mate, them bike chains 'URT!"........But if you claim to like Rock'N'Roll..........Well, go see for yourself. You young wippershappers might even discover what it's all about.
Beer swillin', Bikin', Birds and Boppin beat posing in some arty-farty clip-joint ANY day.
THE BAND.....Been together a couple of months now,although they're all pretty experienced musicians in their own right. Boppin' Brian, lead vocalist, looks and sings a lot like his hero(and one of mine) Gene Vincent.He's also writing some really great stuff of his own.
Dave and Tot,duelling twin guitars, do you anything from a quick Chuck Berry( Easier said than done to this standard) to a nice Duane Eddy. Some nice solo vocal work from these two, as well.
RYTHM......Mark Coley,bass , been with a couple of bands, great bass player, used to work down in Rare Records 'till he got fed up pushing crap to cretins.Big Dave on drums, known him from way back, useful guitarist in his time.
Had quite a tussle with the P.A. Most of it was borrowed, and I'm not used to mixing with echounits Etc in such a small area, but that didn't detract much from a bloody great night out.
I can certainly recommend the TALBOT and the RENEGADES..........
Thanks again, Lads,
Martin X