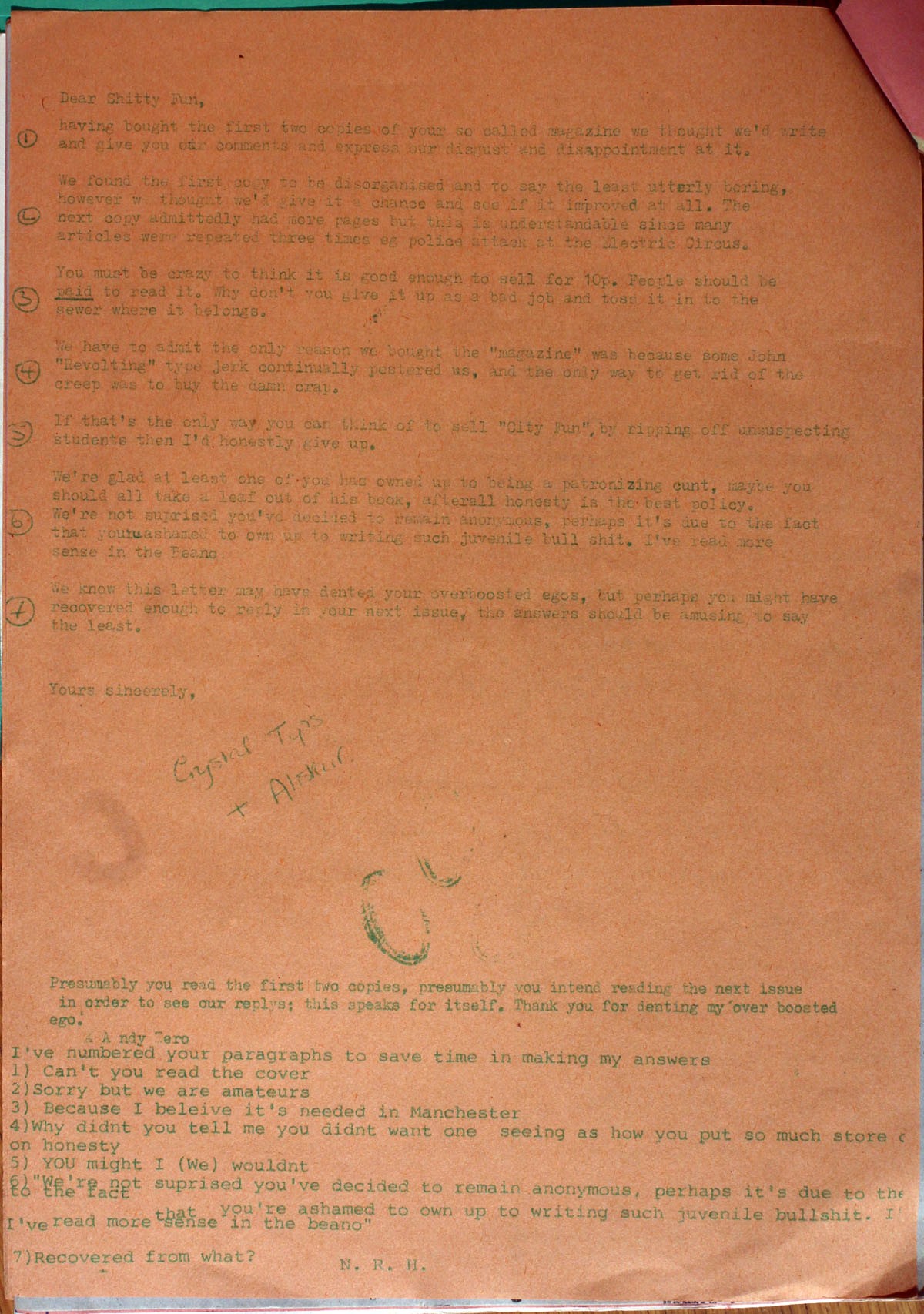 Dear Shitty Fun,
1. Having bought the first two copies of your so called magazine we thought we'd write and give you our comments and express our disgust and disappointment at it.
2. We found the first copy to be disorganised and to say the least utterly boring, however we thought we'd give it a chance and see if it improved at all. The next copy admittedly had more pages but this is understandable since many articles are repeated three times eg police attack at the Electric Circus.
3. You must be crazy to think it is good enough to sell for 10p. People should be paid to read it. Why don't you give it up as a bad job and toss it in the sewer where it belongs.
4. We have to admit the only reason we bought the "magazine" was because some John "Revolting" type jerk continually pestered us, and the only way to get rid of the creep was to buy the damn crap.
5. If that's the only way you can think of to sell "City Fun", by ripping off unsuspecting students then I'd honestly give up.
6. We're glad at least one of you has owned up to being a patronizing cunt, maybe you should all take a leaf out of his book, afterall honesty is the best policy. We're not surprised you've decided to remain anonymous, perhaps it's due to the fact that you are ashamed to own up to writing such juvenile bull shit. I've read more sense in the Beano.
7. We know this letter may have dented your overboosted egos, but perhaps you might have recovered enough to reply in your next issue, the answers should be amusing to say the least.
Yours sincerely,
Crystal Tips + Alistair

Presumably you read the first two copies, presumably you intend reading the next issue in order to see our replys; this speaks for itself. Thank you for denting my ‘over boosted ego’.
Andy Zero

I’ve numbered your paragraphs to save time in making my answers
1) Can’t you read the cover
2) Sorry but we are amateurs
3) Because I beleive it’s needed in Manchester
4) Why didnt you tell me you didnt want one seeing as how you put so much store on honesty
5) YOU might I (we) wouldnt
6) “We’re not suprised you’ve decided to remain anonymous, perhaps it’s due to the to the fact that you’re ashamed to own up to writing such juvenile bullshit. I I’ve read more sense in the beano”
7) Recovered from what?
N.R.H.