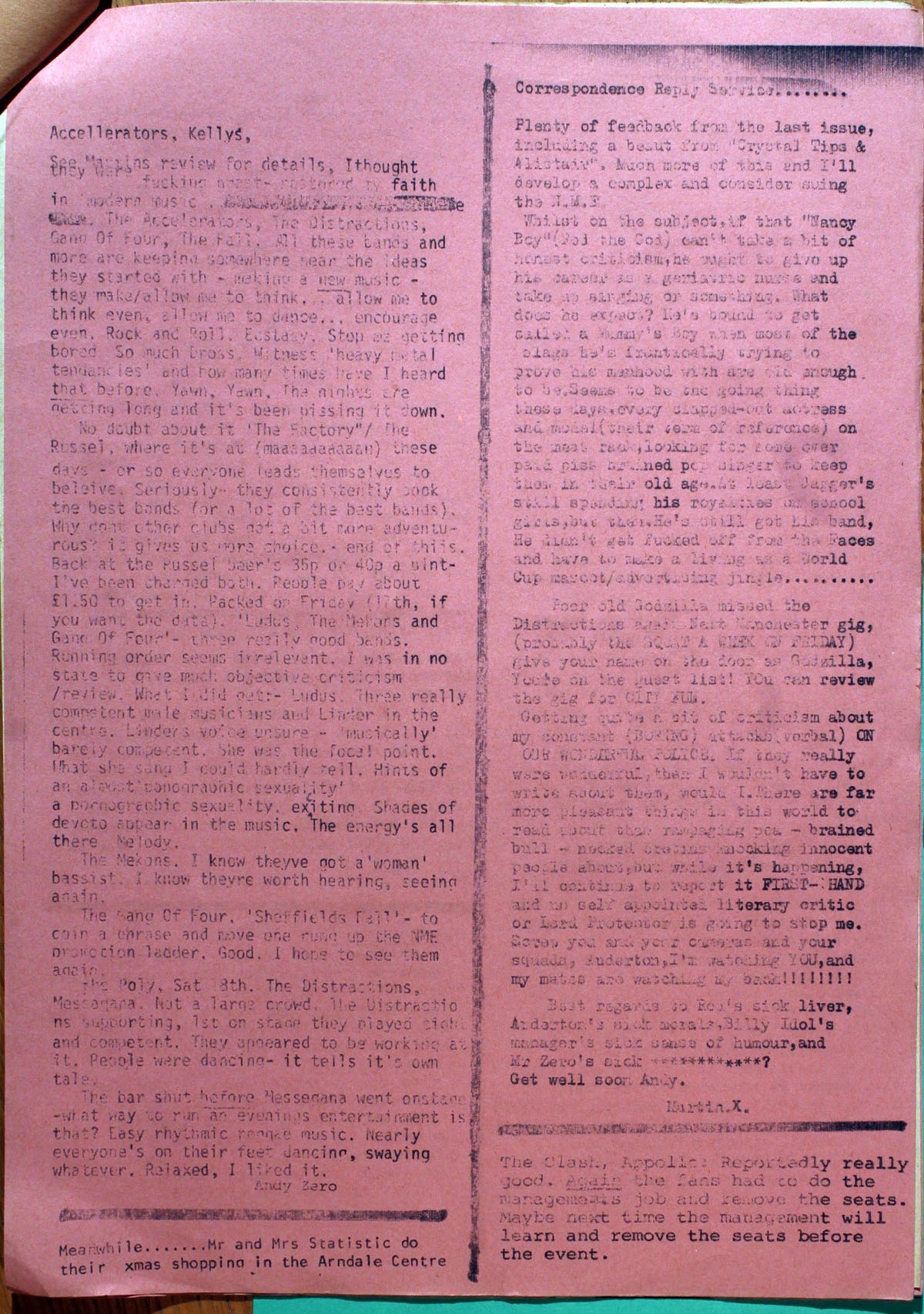 Accellerators, Kellys
See Martins review for details, I thought they were fucking [?] Restored my faith in modern music. The Accelerators, The Distractions, Gang of Four, The Fall. All these bands and more are keeping somewhere near the ideas they started with - making a new music - they make/allow me to think...allow me to think even, allow me to dance... encourage even. Rock and roll. Ecstasy. Stop me getting bored. So much Dross. Witness 'heavy metal tendencies' and how many times have I heard that before. Yawn, yawn. The nights are getting long and its been pissing it down.
No doubt about it 'The Factory"/The Russel, where it's at (maaaaaaaan) these days - or so everybody leads themselves to beleive. Seriously - they consistently book the best bands ). Why can't other clubs get a bit more adventurous? It gives us more choice. end of thiis. Back at the russel Beer's 35p or 40p a pint- I've been charged both. People pay about £1.50 to get in. Packed on Friday (17th, if you want the date). 'Ludus, The Mekons and Gang of Four' - three really good bands. Running order seems irrelevant. I was in no state to give much objective criticism/review. What I did get:- Ludus. Three really competent male musicians and Linder in the centre. Linder's voice unsure - 'musically' barely competent. She was the focal point. What she sang I could hardly tell. Hints of an almost 'ponographic sexuality' a pornographic sexuality. exciting. Shades of devoto appear in the music. The energy's all there Melody.
The Mekons. I know they've got a 'woman' bassist. I know they're worth hearing, seeing again.
The Gang of Four. 'Sheffields Fall' - to coin a phrase and move one rung up the NME promotion ladder. Good. I hope to see them again.
The Poly, Sat 18th. The Distractions, Messegana. Not a large crowd. The Distractions supporting, 1st on the stage they played tight and competent. They appeared to be working at it. People were dancing- it tells it's own tale.
The bar shut before Messegana went on stage-what way to run an evenings entertainment is that? Easy rhythmic reggae music. Nearly everyone's on their feet dancing, swaying whatever. Relaxed, I liked it.
Andy Zero
Meanwhile......Mr and Mrs Statistic do their xmas shopping in the Arndale Centre
Correspondence Reply Service......
Plenty of feedback from the last issue, including a beaut from 'Crystal Tips & Alistair'. Much more of this and I'll develop a complex and consider suing the N.M.E.
Whilst on the subject,if that "Nancy Boy"(Rod the God) can't take a bit of honest criticism,he ought to give up his career as a geriatric nurse and take up singing or something. What does he expect? He's bound to get called a Mummy's boy when most of the slags he's frantically trying to prove his manhood with are old enough to be.Seems to be the going thing these days,every clapped-out actress and model(their term of reference) on the meat rack looking for some over paid piss brained pop singer to keep them in their old age.At least Jagger's spending his royalties on school girls,but then,He's still got his band, He didn't get fucked off from The Faces and have to make a living as a World Cup mascot/advertising jingle.........
Poor old Godzilla missed The Distractions again. Next Manchester gig, (probably the SQUAT A WEEK ON FRIDAY) give your name on the door as Godzilla, You're on the guest list! YOu can review the gig for CITY FUN.
Getting quite a bit of criticism about my constant (BORING) attacks (verbal) ON OUR WONDERFUL POLICE. If they really were wonderful, then I wouldn't have to write about them, would I.There are far more pleasant things in this world than rampaging pea-brained bull-necked cretins mocking innocent people about, but while it's happening, I'll continue to report it FIRST-HAND and no self appointed literary critic or Lord Protector is going to stop me. Screw you and your cameras and your squads, Anderton,I'm watching YOU,and my mates are watching my back !!!!!!!!
Best regards to Rod's sick liver, Anderton's sick morals,Billy Idol's manager's sick sense of humour,and Mr. Zero's sick ***************?
Get well soon Andy.
Martin X.
The Clash, Appollo. Reportedly really good. Again the fans had to do the managements job and remove the seats. Maybe next time the management will learn and remove the seats before the event.