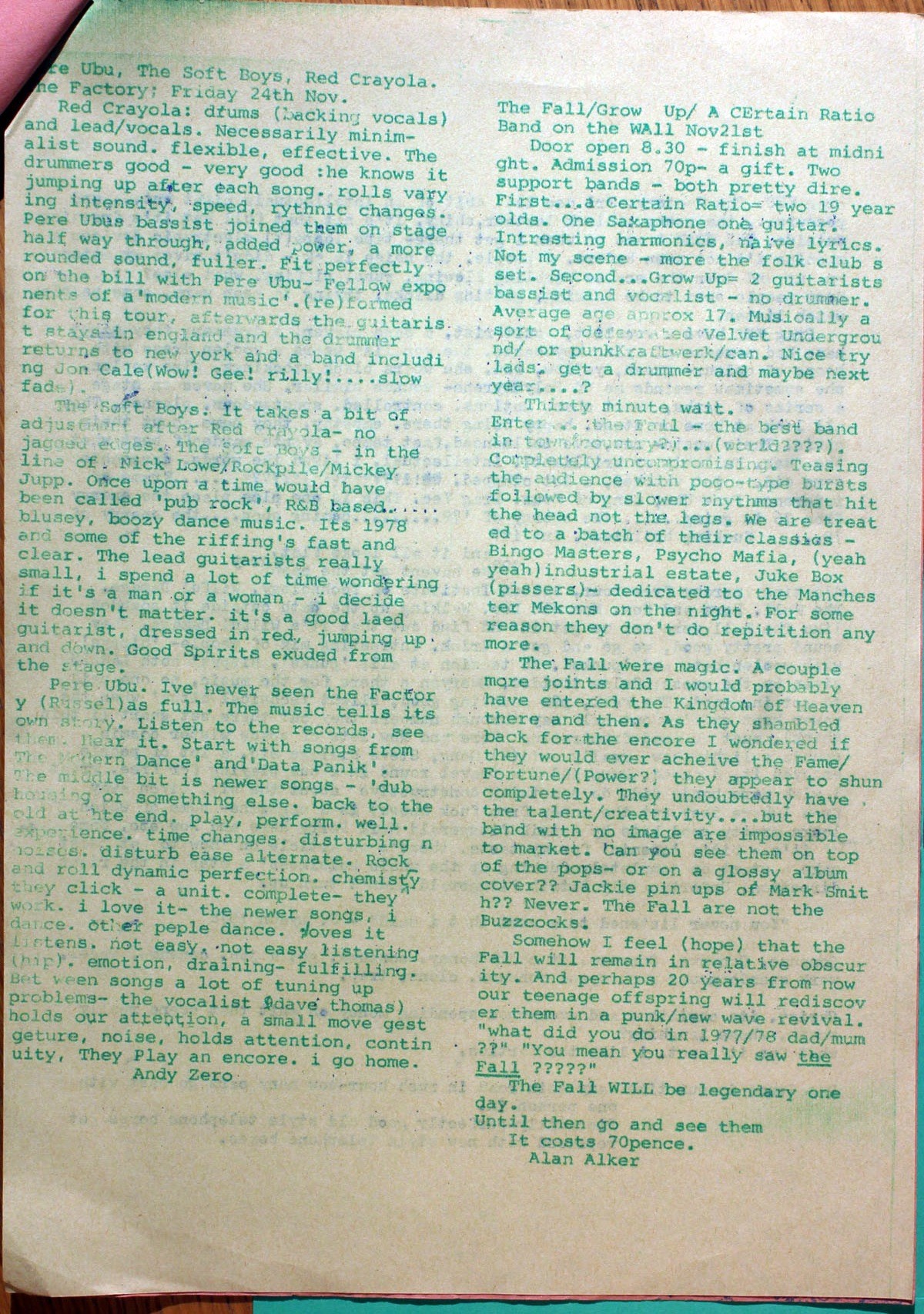 Pere Ubu, The Soft Boys, Red Crayola. The Factory; Friday 24th Nov.
Red Crayola: drums (backing vocals) and lead/vocals. Necessarily minimalist sound. flexible, effective. The drummers good - very good :he knows it jumping up after each song. rolls varying intensity, speed, rythnic changes. Pere Ubus bassist joined them on stage halfway through, added power, a more rounded sound, fuller. Fit perfectly on the bill with Pere Ubu- fellow exponents of a'modern music'. (re)formed for this tour, afterwards the guitarist stays in england and the drummer returns to new york and a band including Jon Cale(Wow! Gee! rilly!...slow fade).
The Soft Boys: It takes a bit of adjustment after Red Crayola- no jagged edges. The Soft Boys - in the line of Nick Lowe/Rockpile/Mickey Jupp. Once upon a time would have been called 'pub rock', R&B based....blusey, dance music. Its 1978 and some of the riffing's fast and clear. The lead guitarists really small, i spend a lot of time wondering if it's a man or a woman - i decide it doesn't matter. it's a good laed guitarist, dressed in red, jumping up and down. Good Spirits exuded from the stage.
Pere Ubu. I've never seen the Factory (Russel)as full. The music tells its own story. Listen to the records, see them. Hear it. Start with songs from 'The Modern Dance' and 'Data Panik'. The middle bit is newer songs - 'dub housing' or something else. back to the old at the end. play. perform. well. experience. time changes. disturbing n noises. disturb ease alternate. Rock and roll dynamic perfection. chemistry they click - a unit. complete- they work. i love it- the newer songs, i dance. other people dance. loves it Listens. not easy. not easy listening (hip). emotion. draining-fulfilling. Between songs a lot of tuning up problems- the vocalist (dave thomas) holds our attention, a small move gest geture, noise, holds attention, continuity. They play an encore. i go home.
Andy Zero

The Fall/Grow Up/ A CErtain Ratio
Band on the WAll Nov21st
Door open 8.30 - finish at midnight. Admission 70p- a gift. Two support bands - both pretty dire. First...a Certain Ratio= two 19 year olds. One saxaphone one guitar. Interesting harmonics, naive lyrics. Not my scene - more the folk club s set. Second...Grow Up= 2 guitarists bassist and vocalist - no drummer. Average age approx 17. Musically a sort of discounted Velvet Underground/ or punkKraftwerk/can. Nice try lads, get a drummer and maybe next year....?
Thirty minute wait.
Enter...The Fall - the best band in town (country?)...(world????). Completely uncompromising. Teasing the audience with pogo-type bursts followed by slower rhythms that hit the head not the legs. We are treated to a batch of their classics - Bingo Masters, Psycho Mafia, (yeah yeah)industrial estate, Juke Box (pissers)- dedicated to the Manchester Mekons on the night. For some reason, they don't do repitition any more.
The Fall were magic. A couple more joints and I would probably have entered the Kingdom of Heaven there and then. As they shambled back for the encore I wondered if they would ever achieve the Fame/Fortune/(Power?, they appear to shun completely. They undoubtedly have the talent/creativity....but the band with no image are impossible to market. Can you see them on top of the pops- or on a glossy album cover?? Jackie pin ups of Mark Smith?? Never. The Fall are not the Buzzcocks.
Somehow I feel (hope) that the Fall will remain in relative obscurity. And perhaps 20 years from now our teenage offspring will rediscover them in a punk/new wave revival. "what did you do in 1977/78 dad/mum??" "You mean you really saw the Fall ?????"
The Fall WILL be legendary one day.
Until then go and see them
It costs 70pence.
Alan Alker