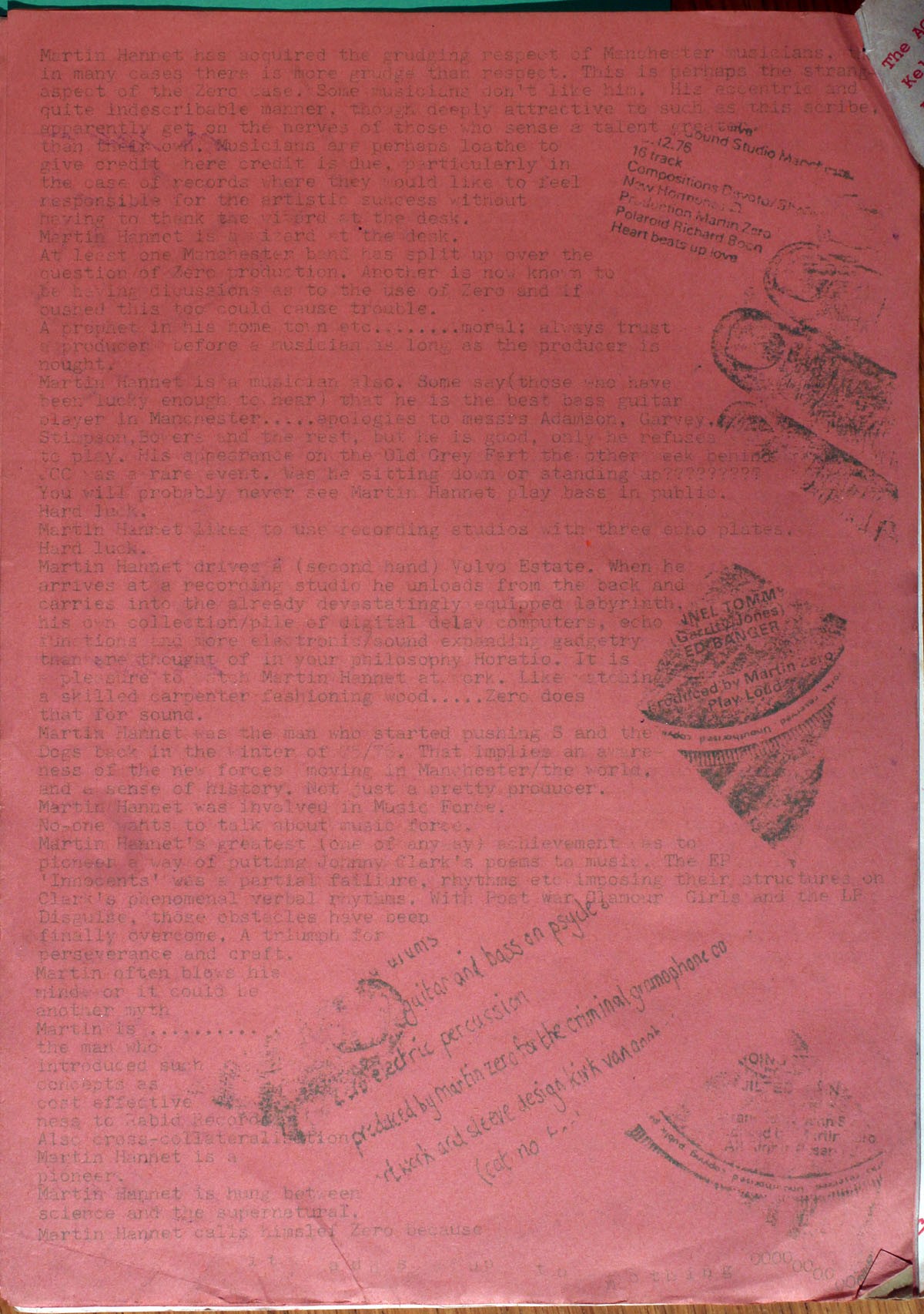 Martin Hannet has acquired the gruding respect of Manchester musicians, in many cases there is more grudge than respect. This is perhaps the strangest aspect of the Zero case. Some musicians don't like him. His eccentric and quite indescribable manner, though deeply attractive to such as this scribe, apparently get on the nerves of those who sense a talent greater than their own. Musicians are perhaps loathe to give credit where credit is due, particularly in the case of records where they would like to feel responsible for the artistic success without having to thank the wizard at the desk.
At least one Manchester band has split up over the question of Zero production. Another is now known to be having discussions as to the use of Zero and if pushed this too could cause trouble.
A prophet in his home town etc....moral; always trust a producer before a musician as long as the producer is nought.
Martin Hannet is a musician also. Some say(those who have been lucky enough to hear) that he is the best bass guitar player in Manchester....apologies to messrs Adamson, Garvey, Stimpson, Bowers and the rest, but he is good, only he refuses to play. His appearance on the Old Grey Fart the other week behind JCC was a rare event. Was he sitting down or standing up??????? You will probably never see Martin Hannet play bass in public. Hard luck.
Martin Hannet drives a (second hand) Volvo Estate. When he arrives at a recording studio he unloads from the back and carries into the already devastatingly equipped labyrinth his own collection/pile of digital delay computers, echo functions and more electronic/sound expanding gadgetry than one thought of in your philosophy Horatio. It is a pleasure to watch Martin Hannet at work. Like watching a skilled carpenter fashioning wood.... Zero does that for sound.
Martin Hannet was the man who started pushing S and the Dogs back in the winter of 75/6. That implies an awareness of the new forces moving in Manchester/the world, and a sense of history. Not just a pretty producer. Martin Hannet was involved in Music Force.
No-one wants to talk about music force.
Martin Hannet's greatest (one of many) achievement is to pioneer a way of putting Johnny Clark's poems to music. The EP 'Innocents' was a partial failure, rhythms etc imposing their structures on Clark's phenomenal verbal rhythms. With Post War Glamour Girls and the LP Disguise, those obstacles have been finally overcome. A triumph for perseverance and craft. Martin often blows his mind or it could be another myth.
Martin is the man who introduced such concepts as cost effectiveness to Rabid Records. Also cross-collateralisation. Martin is a pioneer.
Martin Hannet is hung between science and the supernatural. Martin Hannet calls himself Zero because [the rest is, frustratingly, not reproduced at the foot of the page].