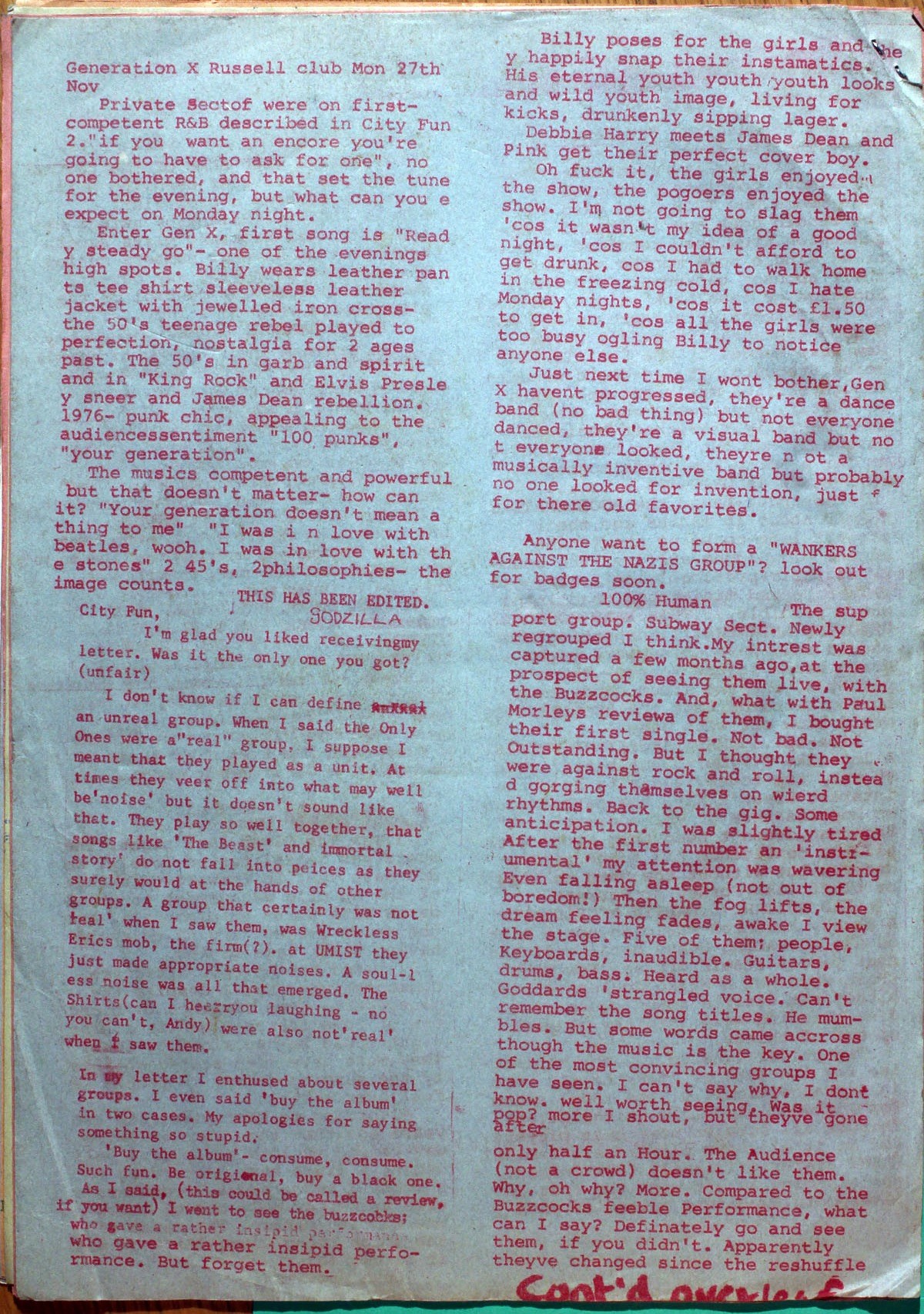 Generation X Russell Club Mon 27th Nov
Private Sectof were on first- competent R&B described in City Fun 2. "if you want an encore you're going to have to ask for one", no one bothered, and that set the tune for the evening, but what can you e expect on a Monday night.
Enter Gen X, first song is "Ready steady go"- one of the evenings high spots. Billy wears leather pants tee shirt sleeveless leather jacket with jewelled iron cross- the 50's teenage rebel played to perfection, nostalgia for 2 ages past. The 50's in garb and spirit and in "King Rock" and Elvis Presley sneer and James Dean rebellion. 1976- punk chic, appealing to the audiencessentiment "100 punks" , "your generation".
The musics competent and powerful but that doesn't matter- how can it? "Your generation doesn't mean a thing to me" "I was i n love with Beatles, wooh. I was in love with the stones" 2 45's, 2philosophies- the image counts.
THIS HAS BEEN EDITED.
GODZILLA
City Fun, I'm glad you liked receivingmy letter. Was it the only one you got? (unfair)
I don't know if I can define an unreal group. When I said the Only Ones were a"real" group, I suppose I meant that they played as a unit. At times they veer off into what may well be'noise' but it doesn't sound like that. They play so well together, that songs like 'The Beast' and immortal story' do not fall into peices as they surely would at the hands of other groups. A group that certainly was not 'real' when I saw them, was Wreckless Erics mob, the firm(?). at UMIST they just made appropriate noises. A soul-less noise was all that emerged. The Shirts(can I hear you laughing - no you can't, Andy) were also not 'real' when I saw them.
In my letter I enthused about several groups. I even said 'buy the album' in two cases. My apologies for saying something so stupid.
'Buy the album'- consume, consume. Such fun. Be original, buy a black one. As I said, (this could be called a review if you want) I went to see the buzzcocks; who gave a rather insipid performance. But forget them.
Billy poses for the girls and they happily snap their instamatics. His eternal youth youth youth looks and wild youth image, living for kicks, drunkenly sipping lager.
Debbie Harry meets James Dean and Pink get their perfect cover boy.
Oh fuck it, the girls enjoyed the show, the pogoers enjoyed the show. I'm not going to slag them 'cos it wasn't my idea of a good night, 'cos I couldn't afford to get drunk, cos I had to walk home in the freezing cold, cos I hate Monday nights, 'cos it cost £1.50 to get in, 'cos all the girls were too busy ogling Billy to notice anyone else.
Just next time I won't bother,Gen X haven't progressed, they're a dance band (no bad thing) but not everyone danced, they're a visual band but not everyone looked, theyre n ot a musically inventive band but probably no one looked for invention, just for there old favourites.
Anyone want to form a "WANKERS AGAINST THE NAZIS GROUP"? look out for badges soon.
100% Human The support group. Subway Sect. Newly regrouped I think.My intrest was captured a few months ago,at the prospect of seeing them live, with the Buzzcocks. And, what with Paul Morleys reviewa of them, I bought their first single. Not bad. Not Outstanding. But I thought they were against rock and roll, instead engorging themselves on wierd rhythms. Back to the gig. Some anticipation. I was slightly tired After the first number an 'instrumental' my attention was wavering Even falling asleep (not out of boredom!) Then the fog lifts, the dream feeling fades, awake I view the stage. Five of them; people, Keyboards, inaudible. Guitars, drums, bass. Heard as a whole. Goddards 'strangled voice. Can't remember the song titles. He mumbles. But some words came accross though the music is the key. One of the most convincing groups I have seen. I can't say why, I don't know. well worth seeing. Was it pop? more I shout, but theyve gone after only half an hour. The Audience (not a crowd, doesn't like them. Why, oh why? More. Compare to the Buzzcocks feeble Performance, what can I say? Definately go and see them, if you didn't. Apparently theyve changed since the reshuffle
Cont'd overleaf