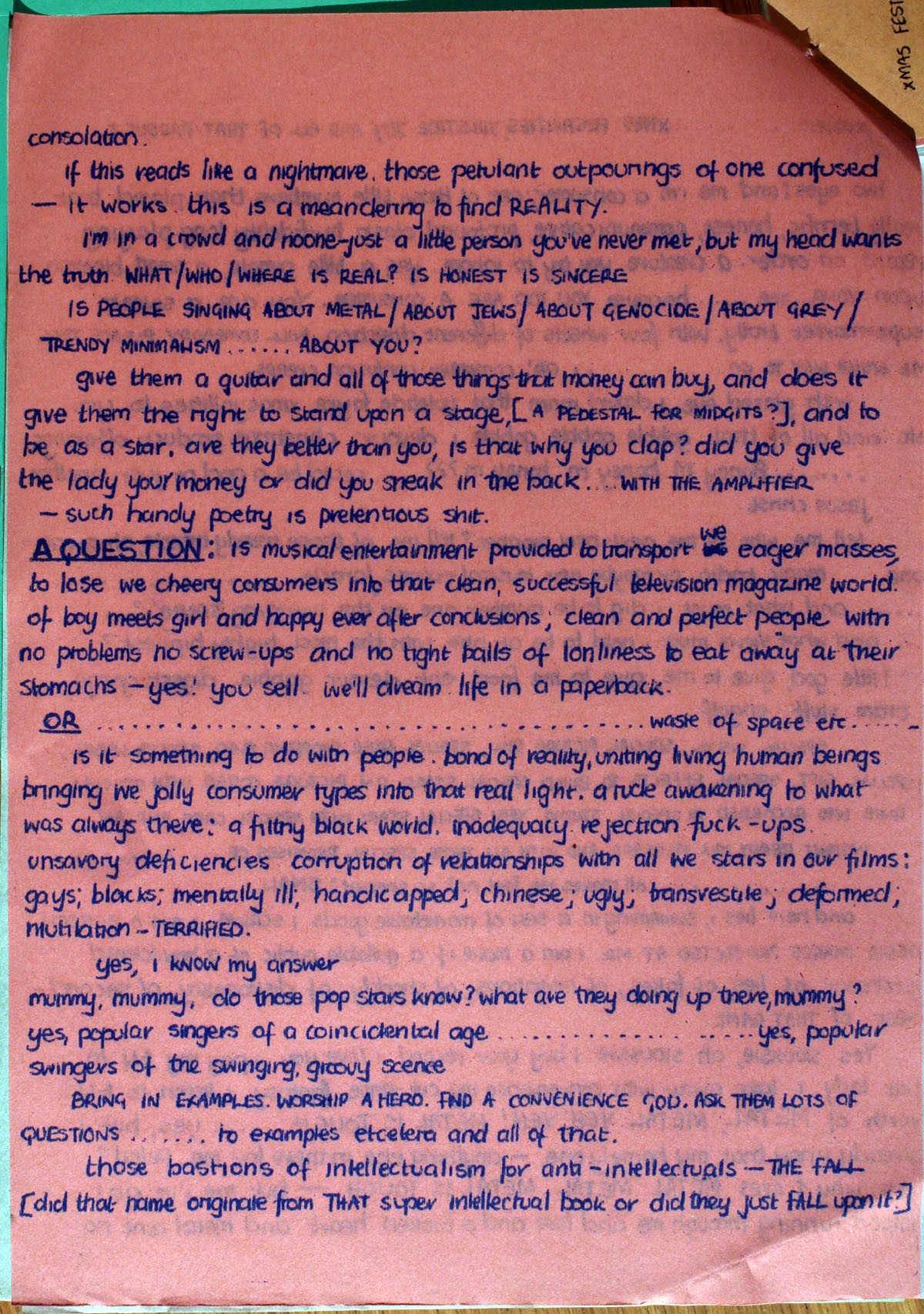 consolation.
If this read like a nightmare, those petulant outpourings of one confused - it works. this is a meandering to find REALITY.
i'm in a crowd and noone-just a little person you've never met, but my head wants the truth. WHAT/WHO/WHERE IS REAL? IS HONEST IS SINCERE
IS PEOPLE SINGING ABOUT METAL/ABOUT JEWS/ABOUT GENOCIDE/ABOUT GREY/TRENDY MINIMALISM.....ABOUT YOU?
give them a guitar and all those things that money can buy, and does it give them the right to stand upon a stage, [A PEDESTAL FOR MIDGITS?], and to be as a star. are they better than you, is that why you clap? did you give the lady your money or did you sneak in the back...WITH THE AMPLIFIER - such handy poetry is pretentious shit.
A QUESTION: is musical entertainment provided to transport we eager masses, to lose we cheery consumers into that clean, successful television magazine world of boy meets girl and happy ever after conclusions; clean and perfect people with no problems no screw-ups and no tight balls of lonliness to eat away at their stomachs - yes! you sell. we'll dream life in a paperback.
OR............waste of space etc......
is it something to do with people. bond of reality, uniting living human beings bringing we consumer types into that real light. a rude awakening to what was always there: a filthy black world. inadequacy. rejection fuck-ups. unsavoury deficiencies corruption of relationships with all we stars in our films: gays; blacks; mentally ill; handicapped; Chinese; ugly; transvestite; deformed; mutilation - TERRIFIED.
yes, i know my answer
mummy, mummy, do these pop stars know? what are they doing up there, mummy? yes, popular singers of a coincidental age..........yes, popular swingers of the swinging, groovy scence
BRING IN EXAMPLES. WORSHIP A HERO. FIND A CONVENIENCE GOD. ASK THEM LOTS OF QUESTIONS..... to examples etcetera all of that.
those bastions of intellectualism for anti-intellectuals - THE FALL [did that name originate from THAT super intellectual book or did they just FALL upon it?]

David Wilkinson Says –
Interesting description of The Fall: â€œThose bastions of intellectualism for anti-intellectualsâ€. It captures very well the tension between bands that drew on their experience of art school or higher education (Buzzcocks, Magazine, Ludus, Gang of Four, The Raincoats and so on) and those that were self-taught after leaving secondary school. Education was one of the many terrains on which arguments about class, authenticity and politics were fought out within punk and post-punk, including in Manchester (e.g. Slaughter and the Dogs, Factory Records, The Worst, The Fall, New Hormones and Richard Boon, Linder and Howard Devoto)
If you'd like to leave a comment, please Login. Login
Manchester Digital Music Archive is licensed under an
Attribution-NonCommercial-ShareAlike 4.0 International License.
Charity no. 1164179
Our archive currently contains 3860 Bands, 758 DJs, 1458 Venues, 316 Industry Professionals and 29648 artefacts contributed by 4037 members.