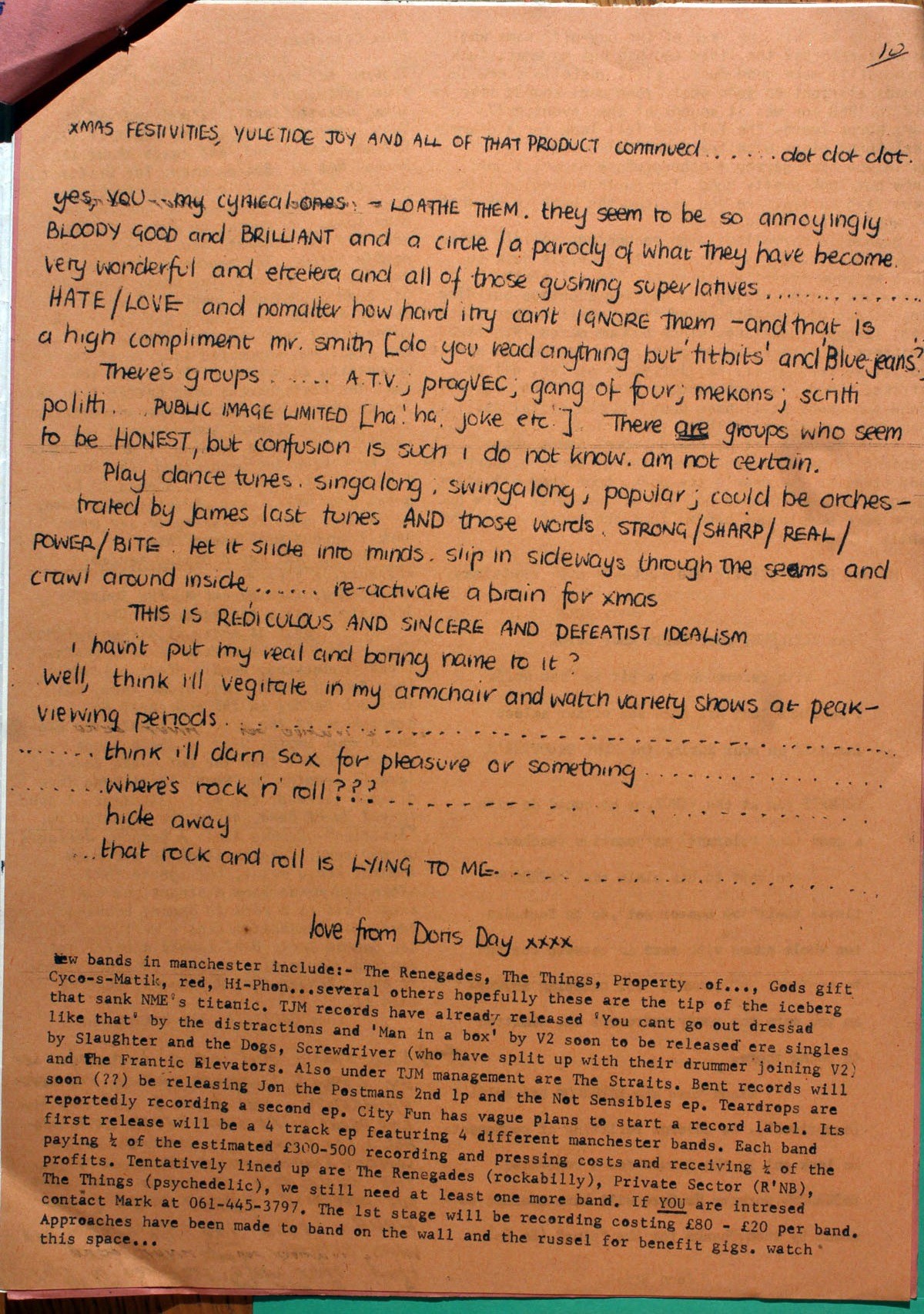 XMAS FESTIVITIES, YULETIDE JOY AND ALL OF THAT PRODUCT continued...dot dot dot
yes, YOU ... my cynical ones - LOATHE THEM. they seem to be so annoyingly BLOODY GOOD and BRILLIANT and a circle/a parody of what they have become. Very wonderful and etcetera and all those gushing superlatives.....
HATE/LOVE and nomatter how hard itry can't IGNORE them -and that is a high compliment mr. smith [do you read anything but 'titbits' and 'Blue-jeans'?
There's groups.... A.T.V.; pragVEC; gang of four; mekons; scritti politti. PUBLIC IMAGE LIMITED [ha! ha! joke etc] There are groups who seem to be HONEST, but confusion is such I do not know. am not certain.
Play dance tunes. singalong; swingalong, popular; could be orchestrated by james last tunes. AND those words. STRONG/SHARP/REAL/POWER/BITE. let it slide into minds. slip in sideways through the seams and crawl around inside.....re-activate a brain for xmas
THIS IS REDICULOUS AND SINCERE AND DEFATIST IDEALISM
I havnt put my real and boring name to it?
Well, think I'll vegitate in my armchair and watch variety shows at peak-viewing periods........
think i'll darn sox for pleasure or something.......
where's rock'n'roll???.........
hide away
that rock and roll IS LYING TO ME........
love from Doris Day xxxx
New bands in manchester include:- The Renegades, The Things, Property of..., Gods gift, Cyco-s-Matik, red, Hi-Phon... several others hopefully are the tip of the iceberg that sank NME's titanic. TJM records have already released 'You cant go out dressad like that' by the distractions and 'Man in a box' by V2 soon to be released ere singles by Slaughter and the Dogs, Screwdriver (who have split up with their drummer joining V2) and The Frantic Elevators. Also under TJM management are The Straits. Bent records will soon (??) be releasing Jon the postmans 2nd lp and the Not Sensibles ep. Teardrops are reportedly recording a second ep. City Fun has vague plans to start a record label. Its first release will be a 4 track ep featuring 4 different manchester bands. Each band paying 1/4 of the estimated £300-500 recording and pressing costs and receiving 1/4 of the profits. Tentatively lined up are The Renegades (rockabilly), Private Sector (R'NB), The Things (psychedelic), we still need at least one more band. If YOU are intresed contact Mark at 061-445-3797. The 1st stage will be recording costing £80 - £20 per band. Approaches have been made to band on the wall and the russel for benefit gigs . watch this space...