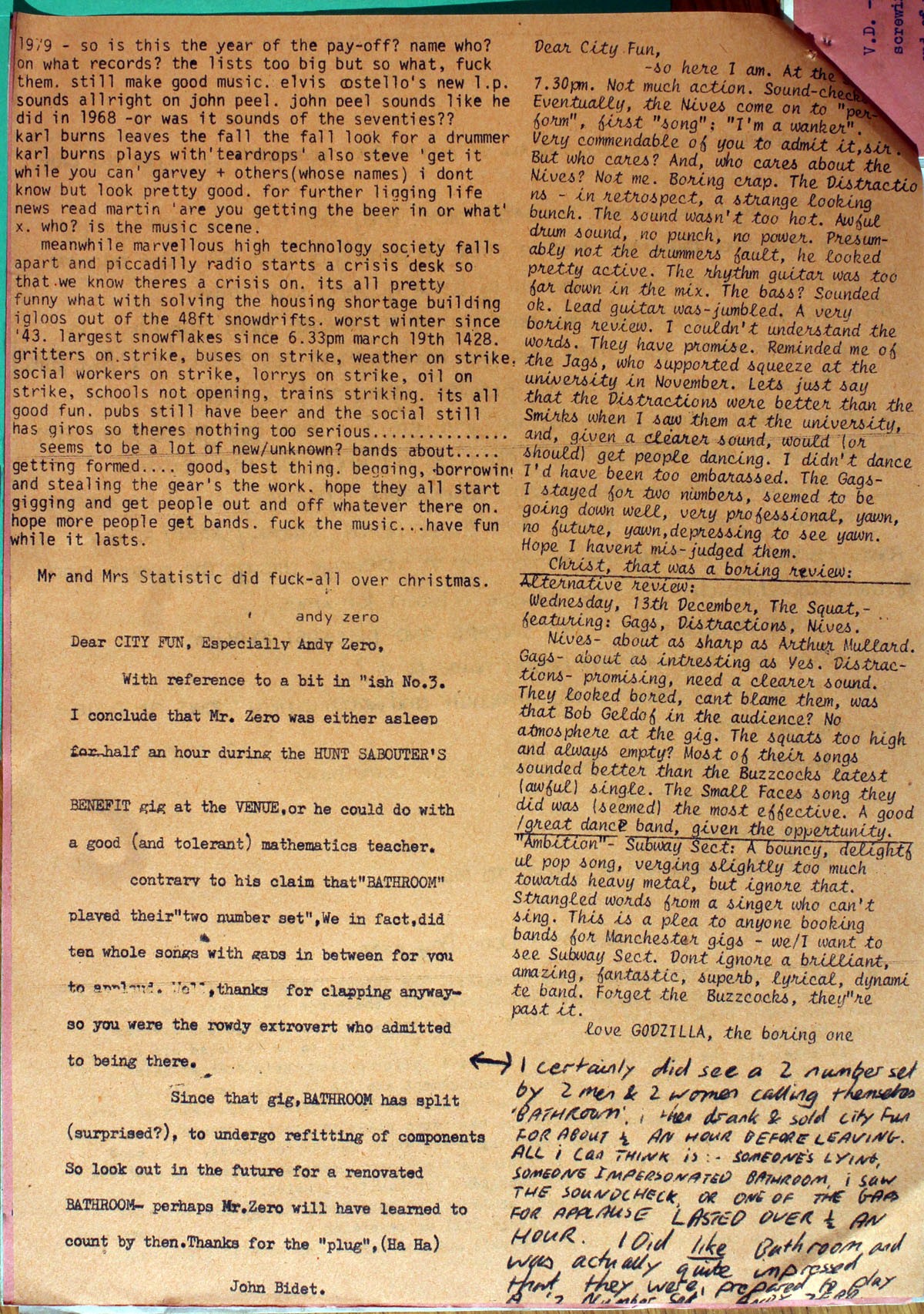 1979 - so is this the year of the pay-off? name who? on what records? the lists too big but so what, fuck them. still make good music. elvis costello's new l.p. sounds allright on john peel. john peel sounds like he did in 1968 -or was it sounds of the seventies??
karl burns leaves the fall the fall look for a drummer karl burns plays with 'teardrops' also steve 'get it while you can' garvey + others(whose names) i dont know but look pretty good. for further ligging life news read martin 'are you getting the beer in or what' x. who? is the music scene.
meanwhile marvellous high technology society falls apart and piccadilly radio starts a crisis desk so that we know theres a crisis on. its all pretty funny what with solving the housing shortage building igloos out of the 48ft snowdrifts, worst winter since '43. largest snowflakes since 6.33pm march 19th 1428. gritters on strike, buses on strike, weather on strike, social workers on strike, lorrys on strike, oil on strike, schools not opening, trains striking, its all good fun. pubs still have beer and the social still has giros so theres nothing too serious............
seems to be a lot of new/unknown? bands about...... getting formed.... good, best thing, borrowing and stealing the gear's the work. hope they all start gigging and get people out and off whatever there on. hope more people get bands. fuck the music...have fun while it lasts.
Mr and Mrs Statistic did fuck-all over christmas.
andy zero
Dear CITY FUN, Especially Andy Zero,
With reference to a bit in "ish No. 3. I conclude that Mr. Zero was either asleep for half an hour during the HUNT SABOUTER'S BENEFIT gig at the VENUE,or he could do with a good (and tolerant) mathematics teacher.
contrary to his claim that "BATHROOM" played their"two number set",We in fact,did ten whole songs with gaps in between for you to applaud. Well, thanks for clapping anyway- so you were the rowdy extrovert who admitted to being there.
Since that gig,BATHROOM has split (surprised?), to undergo refitting of components So look out in the future for a renovated BATHROOM- perhaps Mr.Zero will have learned to count by then.Thanks for the "plug",(Ha Ha)
John Bidet.
Dear City Fun,
-so here I am. At the Squat 7.30pm. Not much action. Sound-check [obscured] Eventually the Nives come on to "per-form" , first "song"; "I'm a wanker". Very commendable for you to admit it, sir. But who cares? And, who cares about the Nives? Not me. Boring crap. The Distractions - in retrospect, a strange looking bunch. The sound wasn't too hot. Awful drum sound, no punch, no power. Presumably not the drummers fault, he looked pretty active. The rhythm guitar was too far down in the mix. The bass? Sounded ok. Lead guitar was-jumbled. A very boring review. I couldn't understand the words. They have promise. Reminded me of the Jags, who supported squeeze at the university in November. Lets just say that the Distractions were better than the Smirks when saw them at the university, and, given a clearer sound, would (or should) get people dancing. I didn't dance I'd have been too embarassed. The Gags- I stayed for two numbers, seemed to be going down well, very professional, yawn, no future, yawn,depressing to see, yawn. Hope I haven't mis-judged them.
Christ, that was a boring review:
Alternative review:
Wednesday, 13th December, The Squat,- featuring: Gags, Distractions,Nives.
Nives about as sharp as Arthur Mullard. Gags- about as interesting as Yes. Distractions- promising, need a clearer sound. They looked bored, can't blame them, was that Bob Geldof in the audience? No atmosphere at the gig. The squats too high and always empty? Most of their songs sounded better than the Buzzcocks latest (awful) single. The Small Faces song they did was (seemed) the most effective. A good/great dance band given the oppertunity.
"Ambition"- Subway Sect: A bouncy, delightful pop song, verging slightly too much towards heavy metal, but ignore that. Strangled words from a singer who can't sing. This is a plea to anyone booking bands for Manchester gigs - we/I want to see Subway Sect. Don't ignore a brilliant, amazing, fantastic, superb, lyrical, dynamite band. Forget the Buzzcocks, they"re past it.
love, GODZILLA, the boring one
I certainly did see a 2 number set by 2 men and 2 women calling themselves "BATHROOM"; then drank and sold City Fun FOR ABOUT 1/2 AN HOUR BEFORE LEAVING. ALL I CAN THINK IS:- SOMEONE'S LYING. SOMEONE IMPERSONATED BATHROOM, i saw THE SOUNDCHECK OR ONE OF THE GAPS FOR APPLAUSE LASTED OVER 1/2 AN HOUR. I Did like Bathroom and was actually quite impressed that they were prepared to play A '2 Number Set'
ANDY ZERO