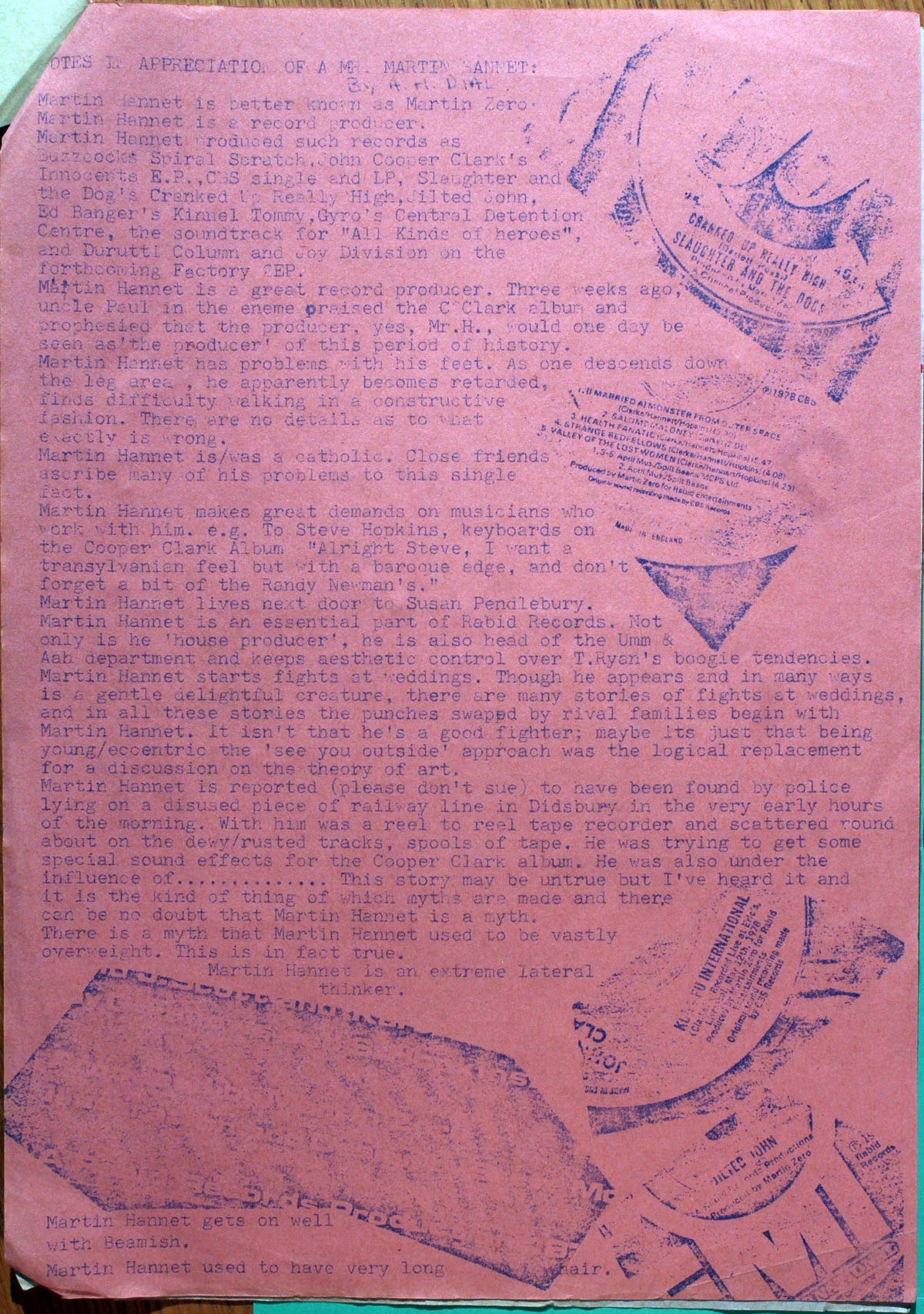 NOTES IN APPRECIATION OF A MR. MARTIN HANNET:
By A.H. DIAL
Martin Hannet is better known as Martin Zero.
Martin Hannet is a record producer.
Martin Hannet produced such records as Buzzcocks Spiral Scratch, John Cooper Clark's Innocents E.P.,CBS single and LP, Slaughter and the Dog's Cranked Up Really High,Jilted John, Ed Banger's Kinnel Tommy,Gyro's Central Detention Centre, the soundtrack for "All kinds of heroes", and Durutti Column and Joy Division on the forthcoming Factory 2EP.
Martin Hannet is a great record producer. Three weeks ago, uncle Paul in the eneme praised the C Clark album and prophesied that the producer, yes, Mr.H., would one day be seen as'the producer' of this period of history.
Martin Hannet has problems with his feet. As one descends down the leg area, he apparently becomes retarded, finds difficulty in walking in a constructive fashion. There are no details as to what exactly is wrong.
Martin Hannet is/was a catholic. Close friends ascibe many of his problems to this single fact.
Martin Hannet makes great demands on musicians who work with him. e.g. To Steve Hopkins, keyboards on the Cooper Clark Album "Alright Steve, I want a transylvanian feel but with a baroque edge, and don't forget a bit of the Randy Newman's."
Martin Hannet lives next door to Susan Pendlebury. Martin Hannet is an essential part of Rabid Records. Not only is he 'house producer', he is also head of the Umm & Aah department and keeps aesthetic control over T.Ryan's boogie tendencies.
Martin Hannet starts fights at weddings. Though he appears and in many ways is a gentle delightful creature, there are many stories of fights at weddings , and in all these stories the punches swapped by rival families begin with Martin Hannet. It isn't that he's a good fighter; maybe it's just that being young/eccentric the 'see you outside' approach was the logical replacement for a discussion on the theory of art.
Martin Hannet is reported (please don't sue) to have been found by police lying on a disused piece of railway line in Didsbury in the very early hours of the morning. With him was a reel to reel tape recorder and scattered round about on the dewy/rusted tracks, spools of tape. He was trying to get some special sound effects for the Cooper Clark album. He was also under the influence of.........This story may by untrue but I've heard it and it is the kind of thing of which myths are made and there can be no doubt that Martin Hannet is a myth.
There is a myth that Martin Hannet used to be vastly overweight. This is in fact true.
Martin Hannet is an extreme lateral thinker.
Martin Hannet gets on well with Beamish.
Martin Hannet used to have very long hair.