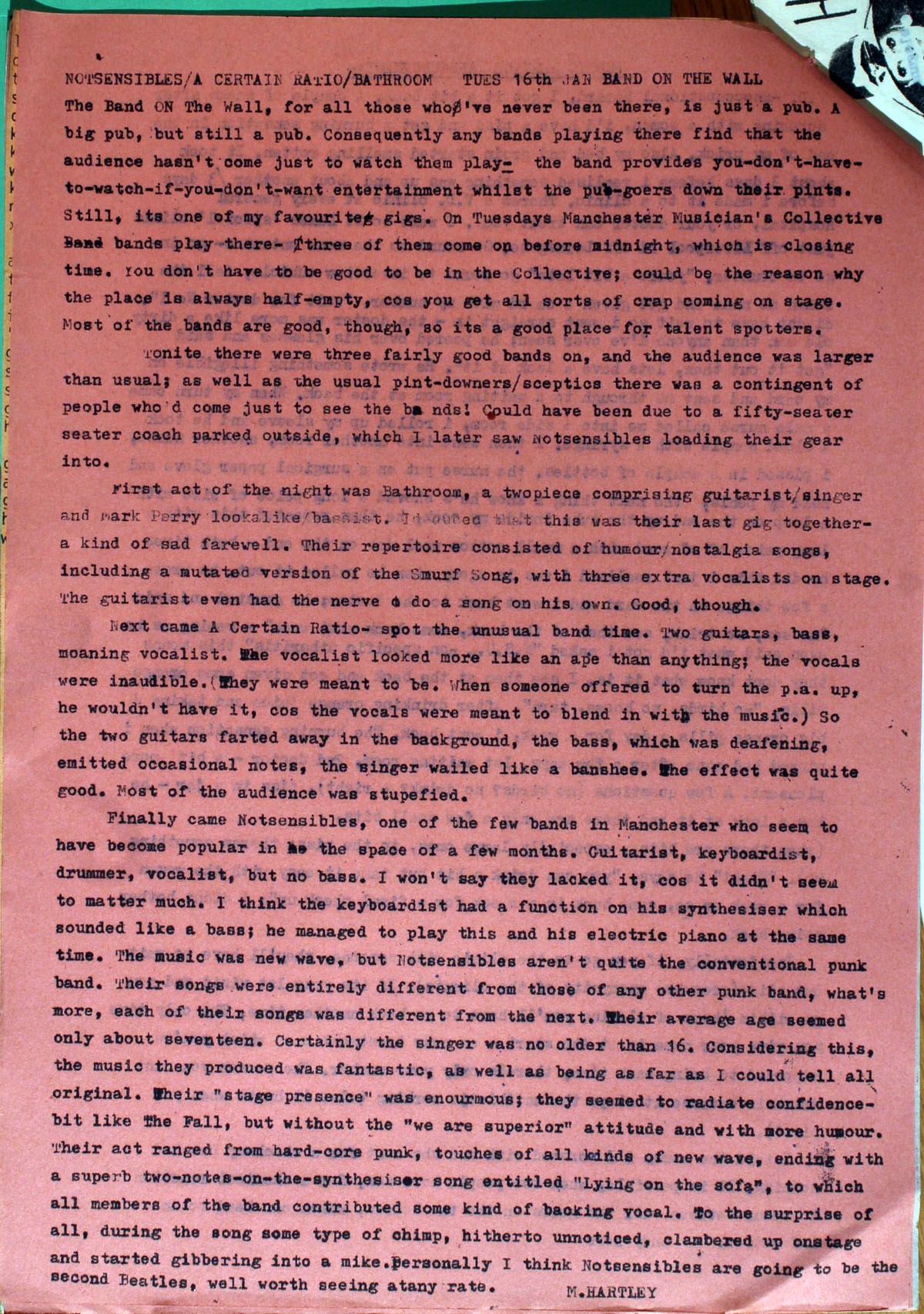 NOTSENSIBLES/A CERTAIN RATIO/BATHROOM TUES 16TH JAN BAND ON THE WALL
The Band ON The Wall, for all those who've never been there, is just a pub. A big pub, but still a pub. Consequently any bands playing there find that the audience hasn't come just to watch them play- the band provides you-don't-have-to-watch-if-you-don't-want entertainment whilst the pub-goers down their pints. Still, it's one of my favourite gigs. On Tuesdays Manchester Musician's Collective Band bands play there- three of them come on before midnight, which is closing time. You don't have to be good to be in the Collective; could be the reason why the place is always half-empty, cos you get all sorts of crap coming on stage. Most of the bands are good, though, so its a good place for talent spotters.
Tonite there were three fairly good bands on, and the audience was larger than usual; as well as the usual pint-downers/sceptics there was a contingent of people who'd come just to see the ba nds! Could have been due to a fifty-seater seater coach parked outside, which I later saw notsensibles loading their gear into.
First act of the night was Bathroom, a twopiece comprising guitarist/singer and Mark Perry lookalike/bassist. I deduced that this was their last gig together- a kind of sad farewell. Their repertoire consisted of humour/nostalgia songs, including a mutated version of the Smurf song, with three extra vocalists on stage. The guitarist even had the nerve to do a song on his own. Good, though.
Next came A Certain Ration - spot the unusual band time. Two guitars, bass, moaning vocalist. The vocalist looked more like an ape than anything; the vocals were inaudible. (They were meant to be. When someone offered to turn the p.a. up, he wouldn't have it, cos the vocals were meant to blend in with the music.) So the two guitars farted away in the background, the bass, which was deafening, emitted occasional notes, the singer wailed like a banshee. The effect was quite good. Most of the audience was stupefied.
Finally came Notsensibiles, one of the few bands in Manchester who seem to have become popular in the space of a few months. Guitarist, keyboardist, drummer, vocalist, but no bass. I won't say they lacked it, cos it didn't seem to matter much. I think the keyboardist had a function on his synthesiser which sounded like a bass; he managed to play this and his electric piano at the same time. The music was new wave, but Notsensibles aren't quite the conventional punk band. Their songs were entirely different from those of any other punk band, what's more, each of their songs was different from the next. Their average age seemed only about seventeen. Certainly the singer was no older than 16. Considering this, the music they produced was fantastic, as well as being as far as I could tell all original. Their "stage presence" was enourmous; they seemed to radiate confidence- bit like The Fall, but without the "we are superior" attitude and with more humour. Their act ranged from hard-core punk, touches of all kinds of new wave, ending with a superb two-notes-on-the-synthesiser song entitled "Lying on the sofa", to which all members of the band contributed some kind of backing vocal. To the surprise of all, during the song some type of chimp, hitherto unnoticed, clambered up onstage and started gibbering into a mike.Personally I think Notsensibles are going to be the second Beatles, well worth seeing atany rate.
M.HARTLEY