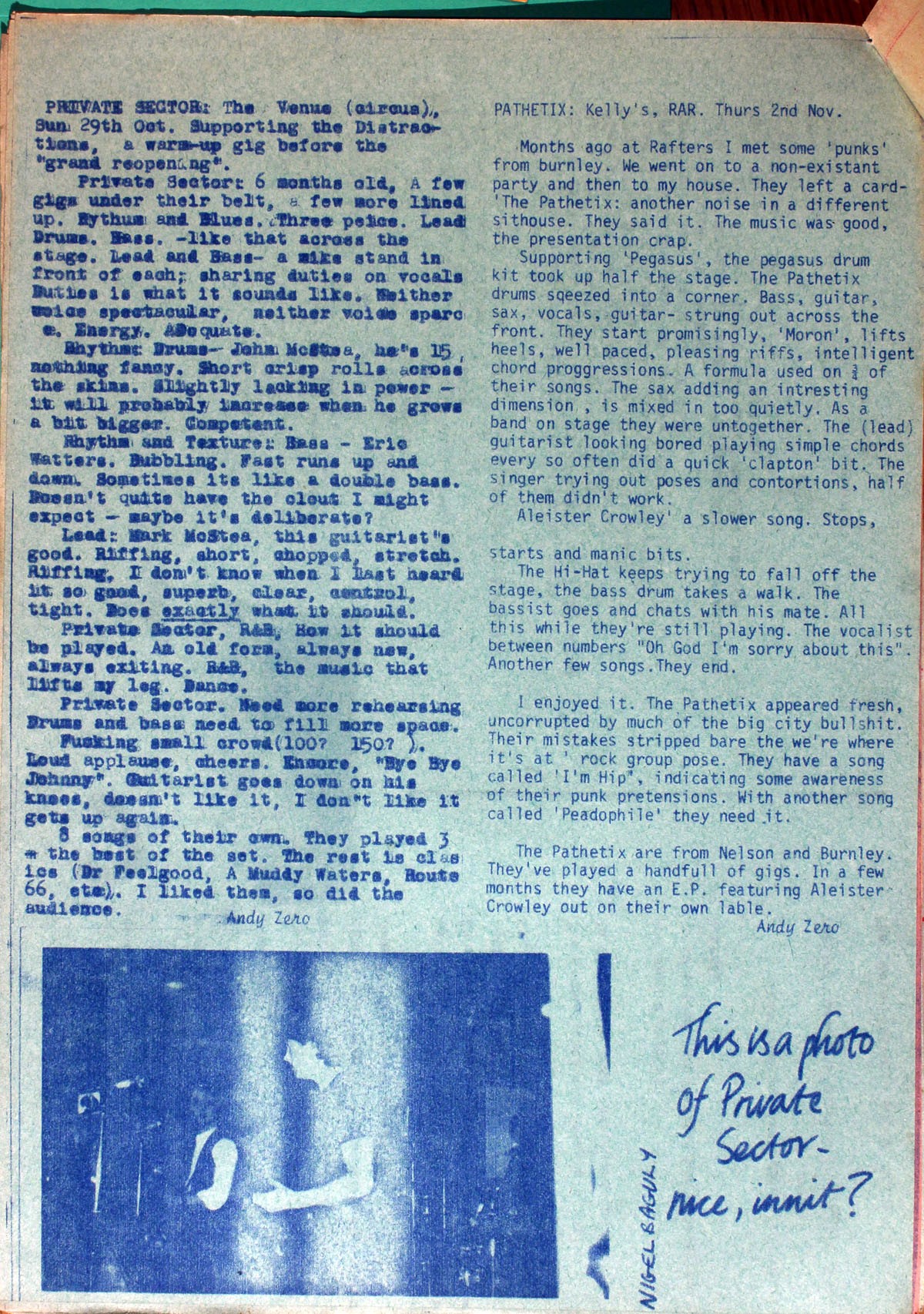 PRIVATE SECTOR: The Venue (circus), Sun 29th Oct. Supporting the Distractions, a warm-up gig before the 'grand reopening'.
Private Sector: 6 months old, A few gigs under their belt, a few more lined up. Rythm and Blues. Three peice. Lead Drums. Bass. -like that across the stage. Lead and Bass- a mike stand in front of each; sharing duties on vocals Duties is what it sounds like. Neither voice spectacular, neither voice sparce. Energy. ADequate.
Rhythm: Drums- John McStea, he's 15, nothing fancy. Short crisp rolls across the skins. Slightly lacking in power - it will probably increase when he grows a bit bigger. Competent.
Rhythm and Texture: Bass - Eric Watters. Bubbling. Fast runs up and down. Sometimes its like a double bass. Doesn't quite have the clout I might expect - maybe it's deliberate?
Lead: Mark McStea, this guitarist's good. Riffing, short, chopped, stretch. Riffing, I don't know when I last heard it so good, superb, clear, control, tight. Does exactly what it should.
Private Sector, R&B, How it should be played. An old form, always new, always exiting. R&B, the music that lifts my leg. Dance.
Private Sector. Need more rehearsing Drums and bass to fill more space.
Fucking small crowd(100? 150? ). Loud applause, cheers. Encore, 'Bye Bye Johnny'. Guitarist goes down on his knees, doesn't like it, I don"t like it gets up again.
8 songs of their own. They played 3 - the best of the set. The rest is clasics (Dr Feelgood, A Muddy Waters, Route 66, etc). I liked them, so did the audience.
Andy Zero

PATHETIX: Kelly's, RAR. Thurs 2nd Nov.
Months ago at Rafters I met some 'punks' from burnley. We went on to a non-existant party and then on to my house. They left a card- 'The Pathetix: another noise in a different sithouse. They said it. The music was good, the presentation crap.
Supporting 'Pegasus' , the pegasus drum kit took up half the stage. The Pathetix drums squeezed into a corner. Bass, guitar, sax, vocals, guitar- strung out across the front. They start promisingly, 'Moron' , lifts heels, well paced, pleasing riffs, intelligent chord proggressions. A formula used on 3/4 of their songs. The sax adding an intresting dimension , is mixed in too quietly. As a band on stage they were untogether. The (lead) guitarist looking bored playing chords every so often did a quick 'clapton' bit. The singer trying out poses and contortions, half of them didn't work.
Aleister Crowley' a slower song. Stops, starts and manic bits.
The Hi-Hat keeps trying to fall off the stage, the bass drum takes a walk. The bassist goes and chats with his mate. All this while they're still playing. The vocalist between numbers "Oh God I'm sorry about this". Another few songs. They end.
I enjoyed it. The Pathetix appeared fresh, uncorrupted by much of the big city bullshit. Their mistakes stripped bare the we're where it's at ' rock group pose. They have a song called 'I'm Hip', indicating some awareness of their punk pretensions. With another song called 'Peadophile' they need it.
The Pathetix are from Nelson and Burnley. They've played a handfull of gigs. In a few months they have an E.P. featuring Aleister Crowley out on their own lable.
Andy Zero