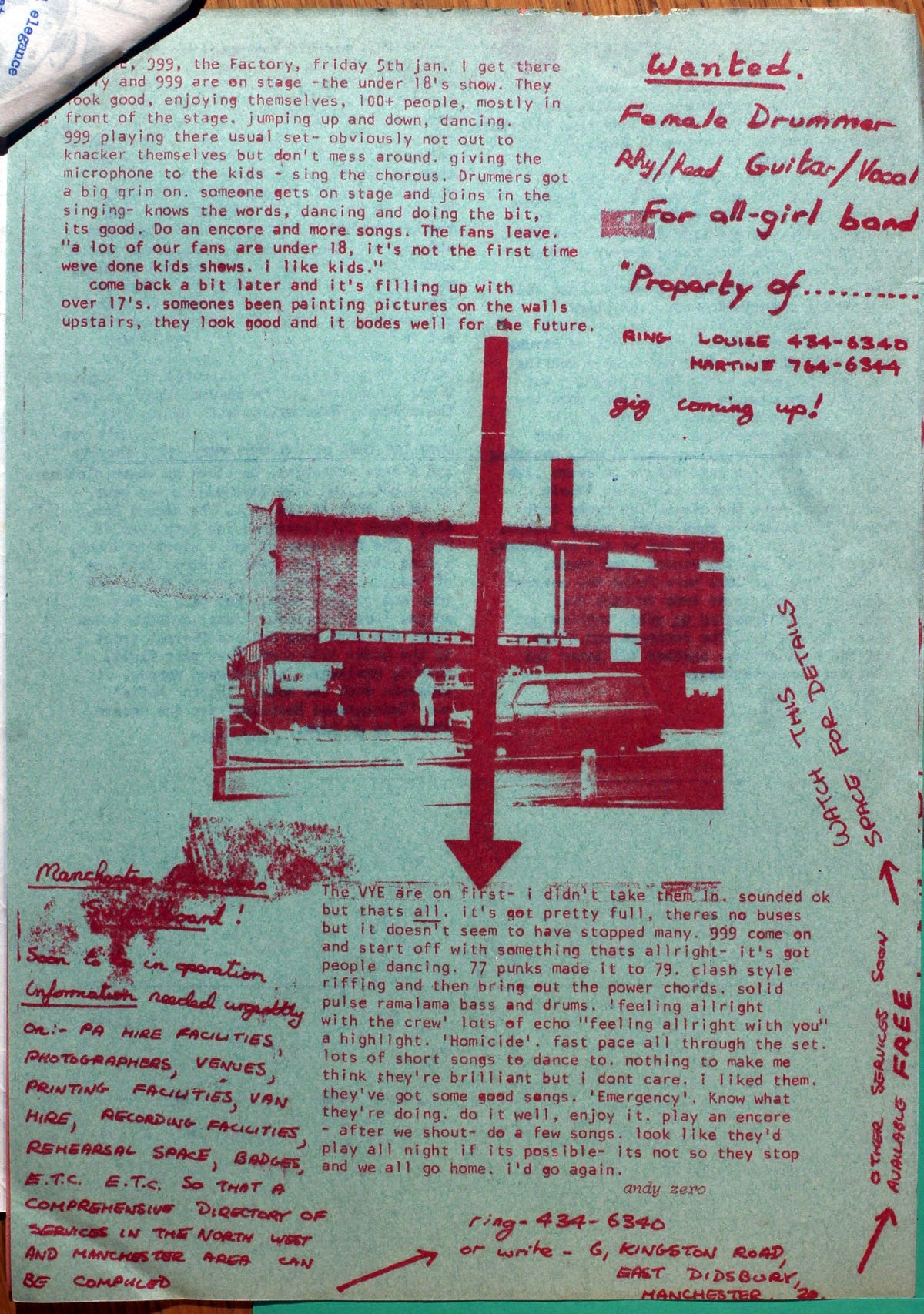 [Obscured] , 999, the Factory, friday 5th jan. I get there early and 999 are on stage -the under 18's show. They look good, enjoying themselves, 100+ people, mostly in front of the stage, jumping up and down, dancing. 999 playing there usual set- obviously not out to knacker themselves but don't mess around. giving the microphone to the kids - sing the chorous. Drummers got a big grin on. someone gets on stage and joins in the singing- knows the words, dancing and doing the bit, its good. Do an encore and more songs. The fans leave, "a lot of our fans are under 18, its not the first time weve done kids shows. i like kids."
come back a bit later and its filling up with over 17's. someones been painting pictures on the walls upstairs, they look good and it bodes well for the future.
The VYE are on first- i didn't take them in. sound ok but thats all. it's got pretty full, there's no buses but it doesn't seem to have stopped many. 999 come on and start off with something thats allright- it's got people dancing. 77 punks made it to 79. clash style riffing and then bring out the power chords. solid pulse ramalama bass and drums. 'feeling allright with the crew' lots of echo "feeling allright with you" a highlight. 'Homicide' fast pace all through the set. lots of short songs to dance to. nothing to make me think they're brilliant but i don't care. i liked them, they've got some good songs. 'Emergency'. Know what they're doing. do it well, enjoy it. play an encore - after we shout - do a few songs. look like they'd play all night if its possible- its not so they stop and we all go home. i'd go again.
andy zero
[Handwritten in the margins] Manchester Musicians Switchboard! Soon to be in operation
Information needed urgently on:- PA HIRE FACILITIES, PHOTOGRAPHERS, VENUES, PRINTING FACILITIES, VAN HIRE, RECORDING FACILITIES, REHEARSAL SPACE, BADGES, E.T.C. E.T.C. SO THAT A COMPREHENSIVE DIRECTORY OF SERVICES IN THE NORTH WEST AND MANCHESTER AREA CAN BE COMPILED ring - 434-6340 or write - 6, KINGSTON ROAD, EAST DIDSBURY, MANCHESTER, 2O
OTHER SERVICES SOON AVAILABLE FREE
WATCH THIS SPACE FOR DETAILS
Wanted.
Female drummer
Rhy/Lead Guitar/Vocal For all-girl band "Property of........."
RING LOUISE 434-6340
MARTINE 764-6344
gig coming up!

David Wilkinson Says –
The no-nonsense 'bloke goes to gig - bloke likes gig - bloke tells people he liked gig' tone of this review of a night at Factory's Russell Club is a world away from the City Fun style which developed after Liz Naylor and Cath Carroll's coup. Nevertheless, there were continuities: the in-jokes and the politics, for example.
If you'd like to leave a comment, please Login. Login
Manchester Digital Music Archive is licensed under an
Attribution-NonCommercial-ShareAlike 4.0 International License.
Charity no. 1164179
Our archive currently contains 3873 Bands, 759 DJs, 1464 Venues, 323 Industry Professionals and 29805 artefacts contributed by 4067 members.