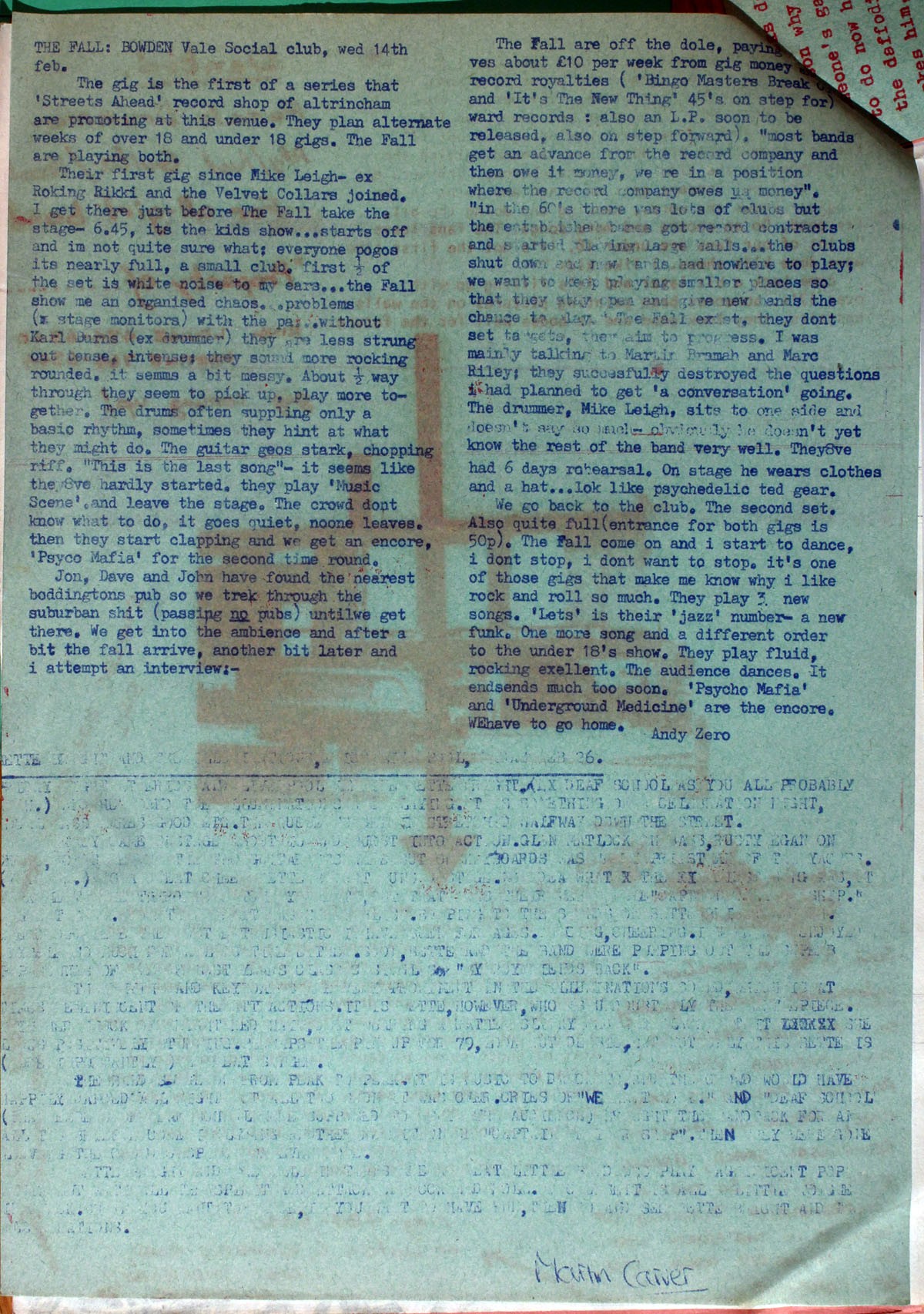 THE FALL: BOWDEN Vale Social club, wed 14th feb.
The gig is the first of a series that 'Streets Ahead' record shop of altrincham are promoting at this venue. They plan alternate weeks of over 18 and under 18 gigs. The Fall are playing both.
Their first gig since Mike Leigh- ex Roking Rikki and the Velvet Collars joined. I got there just before The Fall take the stage- 6.45, its the kids show.....starts off and im not quite sure what; everybody pogos its nearly full, a small club. first 1/2 of the set is white noise to my ears...the Fall show me an organised chaos...problems (stage monitors) with the pa...without Karl Burns (ex drummer) they are less strung out tense, intense, they sound more rocking rounded. it seems a bit messy. About 1/2 way through they seem to pick up, play more to-gether. The drum often supplying only a basic rhythm, sometimes they hint at what they might do. The guitar geos stark, chopping riff. "This is the last song"- it seems like they8ve hardly started. they play 'Music Scene' and leave the stage. The crowd dont know what to do, it goes quiet, noone leaves. then they start clapping and we get an encore, 'Psyco Mafia' for the second time round.
Jon, Dave and John have found the nearest boddingtons pub so we trek through the suburban shit (passing no pubs) untilwe get there. We get into the ambience and after a bit the fall arrive, another bit later and i attempt an interview:-
The Fall are off the dole, paying themselves about £10 per week from gig money and record royalties ( 'Bingo Masters Break Out' and 'It's The New Thing' 45's on step for) ward records : also an L.P. soon to be released, also on step forward). "most bands get an advance from the record company and then owe it money, we re in a position where the record company owes us money". "in the 60's there was lots of clubs but the established bands got record contracts and started playing large halls...the clubs shut down and new bands had nowhere to play; we want to keep playing smaller places so that they stay open and give new bands the chance to play. The Fall exist, they don't set targets, they aim to progress. I was mainly talking to Martin Bramah and March Riley; they successfully destroyed the questions I had planned to get 'a conversation' going. The drummer, Mike Leigh, sits to one side and doesn't say so much - obviously he doesn't yet know the rest of the band very well. They8ve had 6 days rehearsal. On stage he wears clothes and a hat...lok psychedelic ted gear.
We go back to the club. The second set. Also quite full(entrance for both gigs is 50p). The Fall come on and i start to dance, i dont stop, i dont want to stop. it's one of those gigs that makes me know why i like rock and roll so much. They play 3 new songs. 'Lets' is their 'jazz' number- a new funk. One more song and a different order to the under 18's show. They play fluid, rocking exellent. The audience dances. It endsends much too soon. 'Psycho Mafia' and 'Underground Medicine' are the encore. WEhave to go home.
Andy Zero
[Half a page piece completely obscured - difficult to make out much at all - need to see the original. Can see the phrase 'Deaf School']
Martin Carver