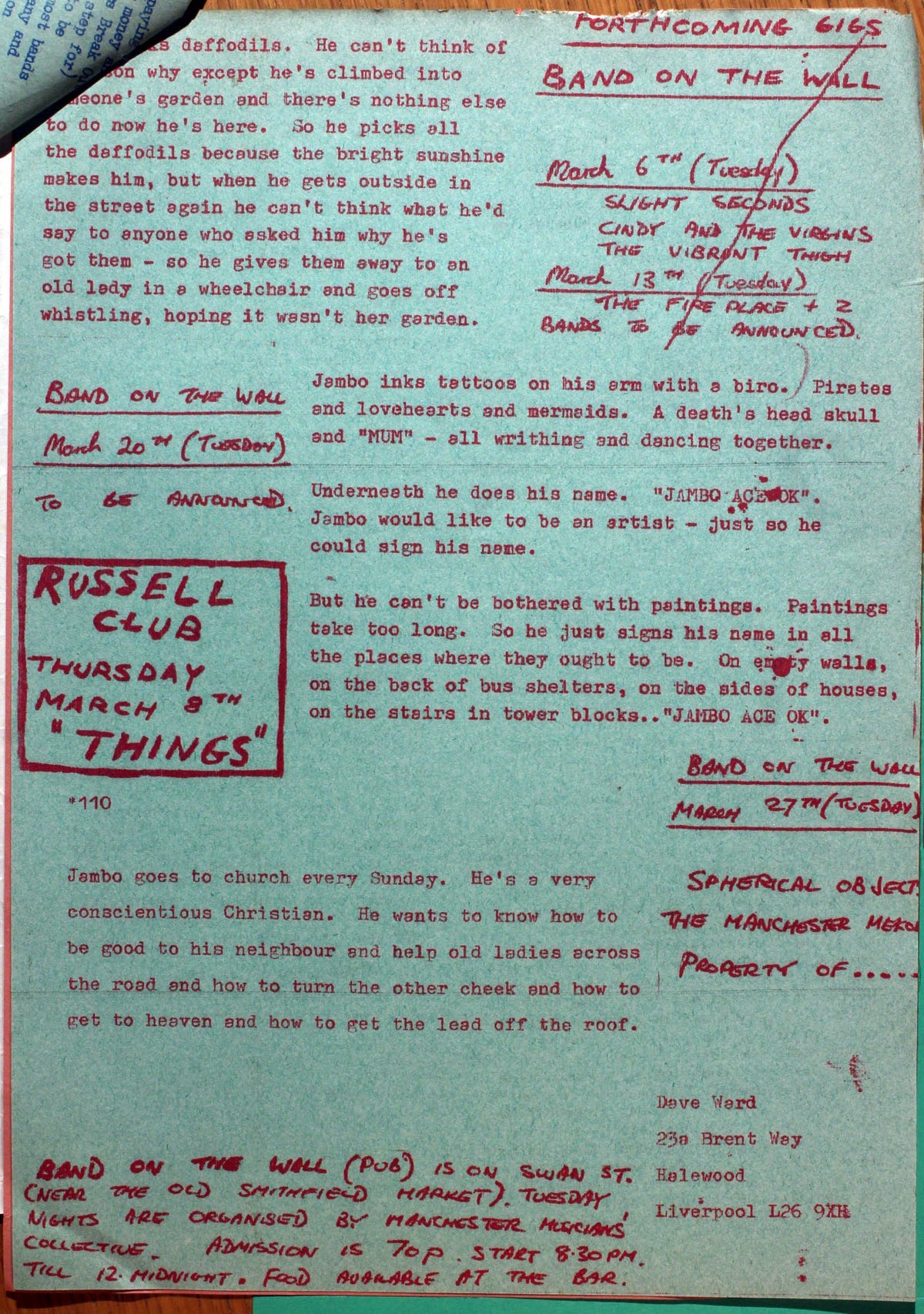 [Obscured] daffodils. He can't think of [obscured] ...on why except he's climbed into someone's garden and there's nothing else to do now he's here. So he picks all the daffodils because the bright sunshine makes him, but when he gets outside in the street again he can't think what he'd say to anyone who asked him why he's got them - so he gives them away to an old lady in a wheel chair and goes off whistling, hoping it wasn't her garden.
Jambo inks tattoos on his arm with a biro. Pirates and lovehearts and mermaids. A death's head skull and "MUM" - all writhing and dancing together.
Underneath he does his name. "JAMBO ACE OK". Jambo would like to be an artist - just so he could sign his name.
But he can't be bothered with paintings. Paintings take too long. So he just signs his name in all the places where they ought to be. On empty walls, on the back of bus shelters, on the sides of houses, on the stairs in tower blocks. "JAMBO ACE OK".
Jambo goes to church every Sunday. He's a very conscientious Christian. He wants to know how to be good to his neighbour and help old ladies across the road and how to turn the other cheek and how to get to heaven and how to get the lead off the roof.
Dave Ward
23a Brent Way
Halewood
Liverpool L26 9XH
[Hand-written in the margin and crossed out, so maybe the gigs had taken place by the time this edition was on sale?]
FORTHCOMING GIGS
BAND ON THE WALL
March 6th (Tuesday)
SLIGHT SECONDS
CINDY AND THE VIRGINS
THE VIBRANT THIGH
March 13th (Tuesday)
THE FIRE PLACE + 2 BANDS TO BE ANNOUNCED
[Hand-written in the margin]
BAND ON THE WALL
March 20th (Tuesday)
TO BE ANNOUNCED.
BAND ON THE WALL
MARCH 27th (TUESDAY)
SPHERICAL OBJECTS
THE MANCHESTER MEKON
PROPERTY OF.......
BAND ON THE WALL (PUB) IS ON SWAN ST. (NEAR THE OLD SMITHFIELD MARKET) TUESDAY NIGHTS ARE ORGANISED BY MANCHESTER MUSICIANS COLLECTIVE. ADMISSION IS 70p. START 8.30PM. TILL 12 MIDNIGHT. FOOD AVAILABLE AT THE BAR.
[Hand-written in the margin but in a separate box]
RUSSELL CLUB
THURSDAY MARCH 8TH
"THINGS"