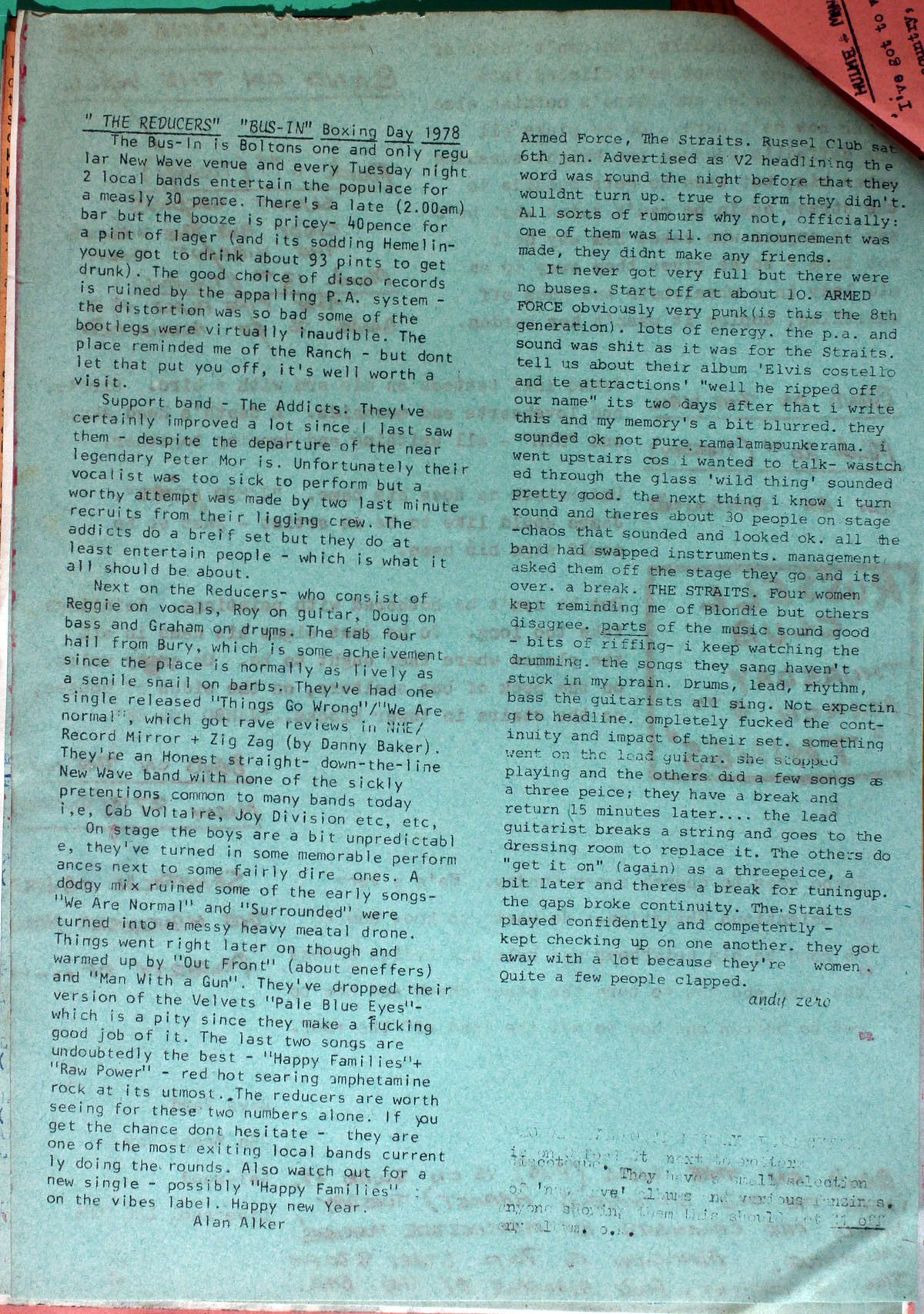 " THE REDUCERS" "BUS-IN" Boxing Day 1978
The Bus-In is Boltons one and only regular new wave venue and every Tuesday night 2 local bands entertain the populace for a measly 30 pence. There's a late (2.00am) bar but the booze is pricey- 40pence for a pint of lager (and its sodding Hemelin- youve got to drink about 93 pints to get drunk). The good choice of disco records is ruined by the appalling P.A. system - the distortion was so bad some of the bootlegs were virtually inaudible. The place reminded me of The Ranch - but don't let that put you off, it's well worth a visit.
Support band - The Addicts. They've certainly improved a lot since I last saw them - despite the departure of the near legendary Peter Mor is. Unfortunately their vocalist was too sick to perform but a worthy attempt was made by two last minute recruits from their ligging crew. The addicts do a breif set but they do at least entertain people - which is what it all should be about.
Next on The Reducers- who consist of Reggie on vocals, Roy on guitar, Doug on bass and Graham on drums. The fab four hail from Bury, which is some acheivement since the place is normally as lively as a senile snail on barbs. They've had one single released "Things Go Wrong"/"We Are normal", which got rave reviews in NME/Record Mirror + Zig Zag (by Danny Baker). They're an Honest straight-down-the-line New Wave band with none of the sickly pretentions common to many bands today i,e, Cab Voltaire, Joy Division etc, etc,
On stage the boys are a bit unpredictable, they've turned in some memorable performances next to some fairly dire ones. A dodgy mix ruined some of the early songs- "We Are Normal" and "Surrounded" were turned into a messy heavy meatal drone. Things went right later on though and warmed up by "Out Front" (about eneffers) and "Man With a Gun". They've dropped their version of the Velvets "Pale Blue Eyes"- which is a pity since they make a fucking good job of it. The last two songs are undoubtedly the best - "Happy Families"+ "Raw Power" - red hot searing amphetamine rock at its utmost. The reducers are worth seeing for these two numbers alone. If you get the chance don't hesitate - they are one of the most exiting local bands currently doing the rounds. Also watch out for a new single - possibly "Happy Families" on the vibes label. Happy new Year.
Alan Alker
Armed Force, The Straits. Russel Club sat 6th Jan. Advertised as V2 headling the word was round the night before that they wouldnt turn up, true to form they didn't. All sorts of rumours why not, officially: one of them was ill. no annoucement was made, they didnt mak any friends.
It never got very full but there were no buses. Start off at about 10. ARMED FORCE obviously very punk(is this the 8th generation) lots of energy. the p.a. and sound was shit as it was for the Straits. tell us about their album 'Elvis Costello and te attractions' "well he ripped off our name" its two days after that I write this and my memory's a bit blurred. they sounded ok not pure ramalamapunkerama. i went upstairs cos i wanted to talk- wastched through the glass 'wild thing' sounded pretty good. the next thing i know i turn around and theres about 30 people on stage -chaos that sounded and looked ok. all the band had swapped instruments. management asked them off the stage they go and its over. a break. THE STRAITS. Four women kept reminding me of Blondie but others disagree. parts of the music sound good - bits of riffing- i keep watching the drumming. the songs they sang haven't stuck in my brain. Drums, lead, rhythm, bass the guitarists all sing. Not expecting to headline. ompletely fucked the continuity and impact of their set. something went on the lead guitar. she stopped playing and the others did a few songs as a three peice; they have a break and return 15 minutes later.....the lead guitarist breaks a string and goes to the dressing room to replace it. The others do "get it on" (again) as a threepeice, a bit later and theres a break for tuningup. the gaps broke continuity. The Straits played confidently and competently - kept checking up on one another. they got away with a lot because they're women. Quite a few people clapped.
andy zero
GEORGE DAVENPORTS COUNTRY MUSIC CENTRE is on Oxford St next to rotters discoteque. They have a small selection of 'new wave' albums and various fanzines. anyone,showing them this should get £1 off any album. o.k.