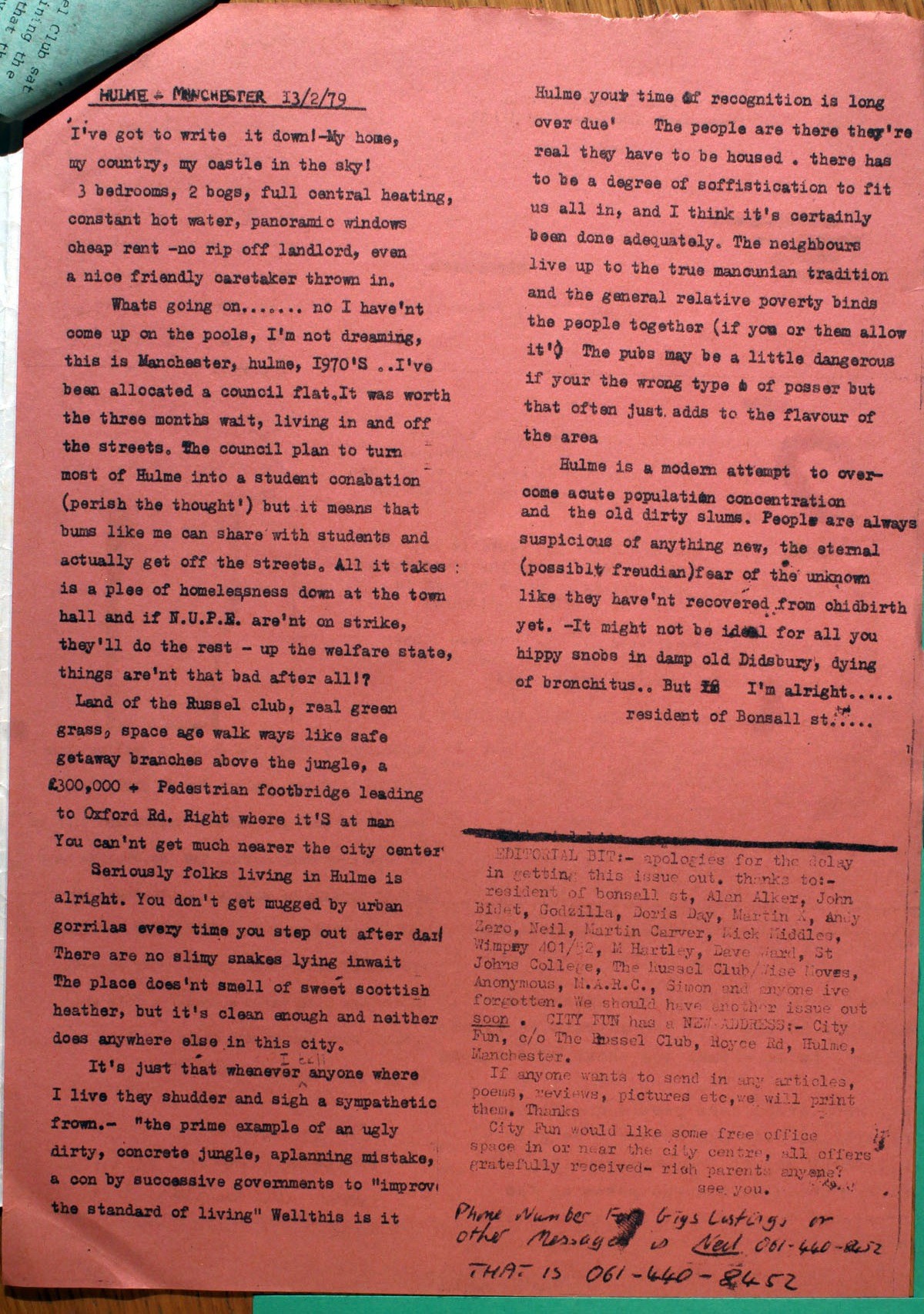 HULME - MANCHESTER 13/2/79
I've got to write it down!-My home, my country, my castle in the sky!
3 bedrooms, 2 bogs, full central heating, constant hot water, panoramic windows cheap rent -no rip off landlord, even a nice friendly caretaker thrown in.
Whats going on ......... no I have'nt come up on the pools, I'm not dreaming, this is Manchester, hulme, 1970's ..I've been allocated a council flat.It was worth the three months wait, living in and off the streets. The council plan to turn most of Hulme into a student conabation (perish the thought') but it means that bums like me can share with students and actually get off the streets. All it takes is a plee of homelessness down at the town hall and if N.U.P.E. are'nt on strike they'll do the rest - up the welfare state, things are'nt that bad after all!?
Land of the Russel club, real green grass, space age walk ways like safe getaway branches above the jungle, a £300,000 + Pedestrian footbridge leading to Oxford Rd. Right where it'S at man You can't get much nearer the city center
Seriously folks living in Hulme is alright. You don't get mugged by urban gorrilas every time you step out after darl
There are no slimy snakes lying inwait
The place does'nt smell of sweet scottish heather, but it's clean enough and neither does anywhere else in this city.
It's just that whenever anyone where I live they shudder and sigh a sympathetic frown.- "the prime example of an ugly, dirty, concrete jungle, aplanning mistake, a con by successive governments to "improve the standard of living" Wellthis is it Hulme your time of recognition is long over due' The people are there they're real they have to be housed . there has to be a degree of soffistication to fit us all in, and I think it's certainly been done adequately. The neighbours live up to the true mancunian tradition and the general relative poverty binds the people together (if you or them allow it') The pubs may be a little dangerous if your the wrong type of posser but that often just adds to the flavour of the area
Hulme is a modern attempt to overcome acute population concentration and the dirty old slums. People are always suspicious of anything new, the eternal (possibly freudian)fear of the unknown like they have'nt recovered from childbirth yet. -It might not be ideal for all you hippy snobs in damp old Didsbury, dying of bronchitus.. But I'm alright....
resident of Bonsall st....
EDITORIAL BIT:- apologies for the delay in getting this issue out. thanks to:- resident of bonsall st, Alan Alker, John Bidet, Godzilla, Doris Day, Martin X, Andy Zero, Neil, Martin Carver, Mick Middles, Wimpey 401/52, M Hartley, Dave Ward, St Johns College, The Russel Club/Wise Moves, Anonymous, M.A.R.C., Simon and anyone ive forgotten. We should have another issue out soon . CITY FUN has a NEW ADDRESS:- City Fun, c/o The Russel Club, Royce Rd, Hulme, Manchester.
If anyone wants to send in any articles, poems, reviews, pictures etc we will print them. Thanks
City Fun would like some free office space in or near the city centre, all offers gratefully received- rich parents anyone?
see you.
Phone Number For Gigs Listings or other Messages is Neil 061-440-8452 THAT IS 061-440-8452