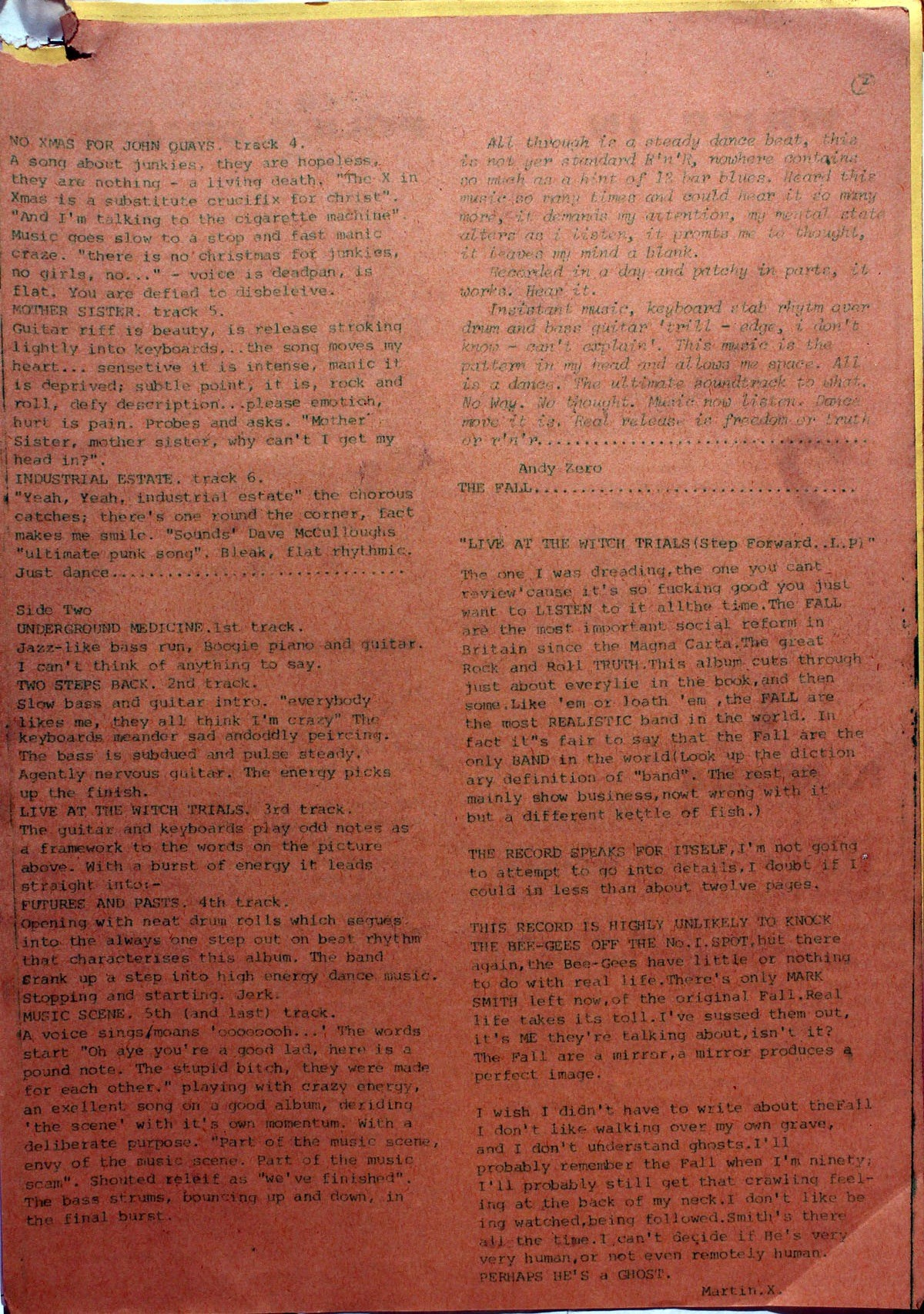 NO XMAS FOR JOHN QUAYS. track 4.
A song about junkies, they are hopeless, they are nothing - a living death. "The X in Xmas is a substitute crucifix for christ". "And I'm talking to the cigarette machine". Music goes slow to a stop and fast manic craze. "there is no christmas for junkies, no girls, no..." - voice is deadpan, is flat. You are defied to disbeleive.
MOTHER SISTER. track 5.
Guitar riff is beauty, is release stroking lightly into keyboards...the song moves my heart...sensetive it is intense, manic it is deprived; subtle point, it is, rock and roll, defy description...please emotioh, hurt is pain. Probes and asks. "Mother. Sister, mother sister, why can't I get my head in?".
INDUSTRIAL ESTATE. track 6.
"Yeah, Yeah, industrial estate" the chorous catches; there's one round the corner, fact makes me smile. "Sounds" Dave McCulloughs "ultimate punk song". Bleak, flat rhythmic. Just dance...............................
Side Two
UNDERGROUND MEDICINE.1st track.
Jazz-like bass run, Boogie piano and guitar. I can't think of anything to say.
TWO STEPS BACK. 2nd track.
Slow bass and guitar intro. "everybody likes me, they all think I'm crazy" The keyboards meander sad andoddly peircing. The bass is subdued and pulse steady. Agently nervous guitar. The energy picks up the finish.
LIVE AT THE WITCH TRIALS. 3rd track.
The guitar and keyboards play odd notes as a framework to the words on the picture above. With a burst of energy it leads straight into:-
FUTURES AND PASTS. 4th track.
Opening with neat drum rolls which segues into the always one step out on beat rhythm that characterises this album. The band crank up a step into high energy dance music. Stopping and starting. Jerk.
MUSIC SCENE. 5th (and last) track.
A voice sings/moans 'oooooooooh...' The words start 'Oh aye you're a good lad, here is a pound note. The stupid bitch, they were made for each other." playing with crazy energy, an excellent song on a good album, deriding 'the scene' with it's own momentum. With a deliberate purpose. "Part of the music scene, envy of the music scene. Part of the music scam". Shouted releif as "We've finished". The bass strums, bouncing up and down, in the final burst.
All through is a steady dance beat, this is not yer standard R'n'R, nowhere contains so much as a hint of 18 bar blues. Heard this music so many times and could hear it so many more, it demands my attention, my mental state alters as I listen, it prompts me to thought, it leaves my mind a blank.
Recorded in a day and patchy in parts, it works. Hear it.
Insistant music, keyboard stab rhythm over drum and bass guitar 'trill - edge, i don't know - can't expain'. This music is the pattern in my head and allows me space. All is a dance. The ultimate soundtrack to what. No Way. No thought. Music now listen. Dance move it is. Real release in freedom or Truth or r'n'r....................
Andy Zero
THE FALL........
"LIVE AT THE WITCH TRIALS(Step Forward..L.P.)"
The one I was dreading,the one you cant review'cause it's just so fucking good you just want to LISTEN to it allthe time.The FALL are the most important social reform in Britain since the Magna Carta.The great Rock and Roll TRUTH.This album cuts through just about everylie in the book, and then some. Like 'em or loath 'em, the FALL are the most REALISTIC band in the world. In fact it"s fair to say that the FALL are the ONLY band in the world(Look up the dictionary definition of "band". The rest are mainly show business,nowt wrong with it but a different kettle of fish.)
THE RECORD SPEAKS FOR ITSELF, I'm not going to attempt to go into details.I doubt if I could in less than about twelve pages.
THIS RECORD IS HIGHLY UNLIKELY TO KNOCK THE BEE-GEES OFF THE No. I.SPOT,but there again,the Bee-Gees have little or nothing to do with real life.There's only MARK SMITH left now,of the original Fall.Real life takes its toll. I've sussed them out, it's ME they're talking about,isn't it? The Fall are a mirror, a mirror produces a perfect image.
I wish I didn't have to write about theFall I don't like walking over my own grave, and I don't understand ghosts.I'll probably remember the Fall when I'm ninety. I'll probably still get that crackling feel-ing at the back of my neck. I don't like being watched,being followed.Smith's there all the time. I can't decide if he's very very human,or not even remotely human. PERHAPS HE'S A GHOST.
Martin. X.