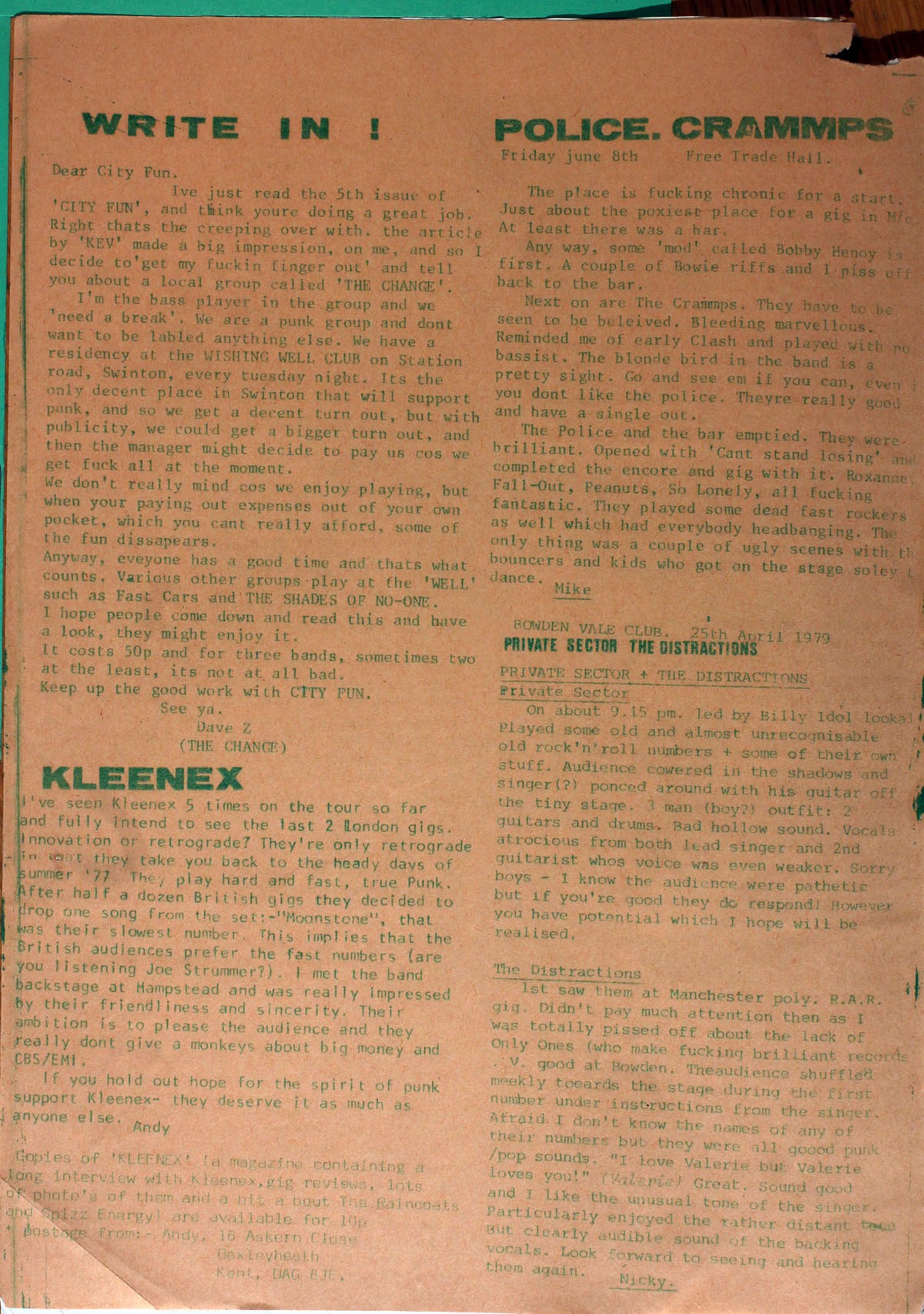 WRITE IN!
Dear City Fun.
I've just read the 5th issue of 'CITY FUN', and think you're doing a great job. Right thats the creeping over with, the article by 'KEV' made a big impression on me, and so I decide to'get my fucking finger out' and tell you about a local group called 'THE CHANGE'.
I'm the bass player in the group and we 'need a break'. We are a punk group and dont want to be labled anything else. We have a residency at the WISHING WELL CLUB on Station road, Swinton, every tuesday night. Its the only decent place in Swinton that will support punk, and so we get a decent turn out, but with publicity, we could get a bigger turn out, and then the manager might decide to pay us cos we get fuck all at the moment.
We don't really mind cos we enjoy playing, but when your paying out expenses out of your own pocket, which you cant really afford, some of the fun dissapears.
Anyway, everyone has a good time and thats what counts. Various other groups play at the 'WELL' such as Fast Cars and THE SHADES OF NO-ONE.
I hope people come down and read this and have a look, they might enjoy it.
It costs 50p and for three bands, sometimes two at the least, it's not at all bad.
Keep up the good work with CITY FUN.
See ya.
Dave Z
(THE CHANGE)
KLEENEX
I've seen Kleenex 5 times on the tour so far and fully intend to see the last 2 London gigs. Innovation or retrograde? They're only retrograde in that they take you back to the heady days of Summer '77. They play hard and fast, true Punk. After half a dozen British gigs they decided to drop one song from the set:- "Moonstone", that was their slowest number. This implies that the British audiences prefer the fast numbers (are you listening Joe Strummer?). I met the band backstage at Hampstead and was really impressed by their friendliness and sincerity. Their ambition is to please the audience and they really don't give a monkeys about big money and CBS/EMI.
If you hold out hope for the spirit of punk support Kleenex- they deserve it as much as anyone else.
Andy
Copies of 'KLEENEX' (a magazine containing a long interview with Kleenex,gig reivews, lots of photo's of them and a bit about The Raincoats and Spizz Energy) are available for 10p plus postage from Andy, 15 Askern Close, Bexleyheath, Kent, DAG 8JE.
POLICE. CRAMMPS
Friday june 8th Free Trade Hall.
The place is fucking chronic for a start. Just about the poxiest place for a gig in M/C. At least there was a bar.
Any way, some 'mod' called Bobby Hendy is first. A couple of Bowie riffs and I piss of to the bar.
Next on are The Crammps. They have to be seen to be beleived. Bleeding marvellous. Reminded me of early Clash and played with no bassist. The blonde bird in the band is a pretty sight. Go and see em if you can, even if you don't like the police. Theyre really good and have a single out.
The Police and the bar emptied. They were brilliant. Opened with 'Cant stand losing' and completed the encore and gig with it. Roxanne, Fall-Out, Peanuts, So Lonely, all fucking fantastic. They played some dead fast rockers as well which had everybody headbanging. The only thing was a couple of ugly scenes with the bouncers and some kids who got on the stage soley to dance.
Mike
BOWDEN VALE CLUB. 25th April 1979
PRIVATE SECTOR THE DISTRACTIONS
PRIVATE SECTOR + THE DISTRACTIONS
Private Sector
On about 9.15 pm. led by Billy Idol lookalike. Played some old and almost unrecognisable old rock'n'roll numbers + some of their own stuff. Audience cowered in the shadows and singer(?) ponced around with his guitar off the tiny stage. 3 man (boy??) outfit: 2 guitars and drums. Bad hollow sound. Vocals atrocious from both lead singer and 2nd guitarist whos voice was even weaker. Sorry boys - I know the audience were pathetic but if you're good they do respond! However you have potential which I hope will be realised.
The Distractions
1st saw them at Manchester poly. R.A.R. gig. Didn't pay much attention then as I was totally pissed off about the lack of Only Ones (who make fucking brilliant records
V. good at Bowden. The audience shuffled meekly towards the stage during the first number under instruction from the singer. Afraid I don't know the names of any of their numbers but they were all good punk/pop sounds. "I love Valerie, but Valerie loves you!" (Valerie) Great. Sound good and I like the unusual tone of the singer. Particularly enjoyed the rather distant but clearly audible sound of the backing vocals. Look forward to seeing and hearing them again.
Nicky.