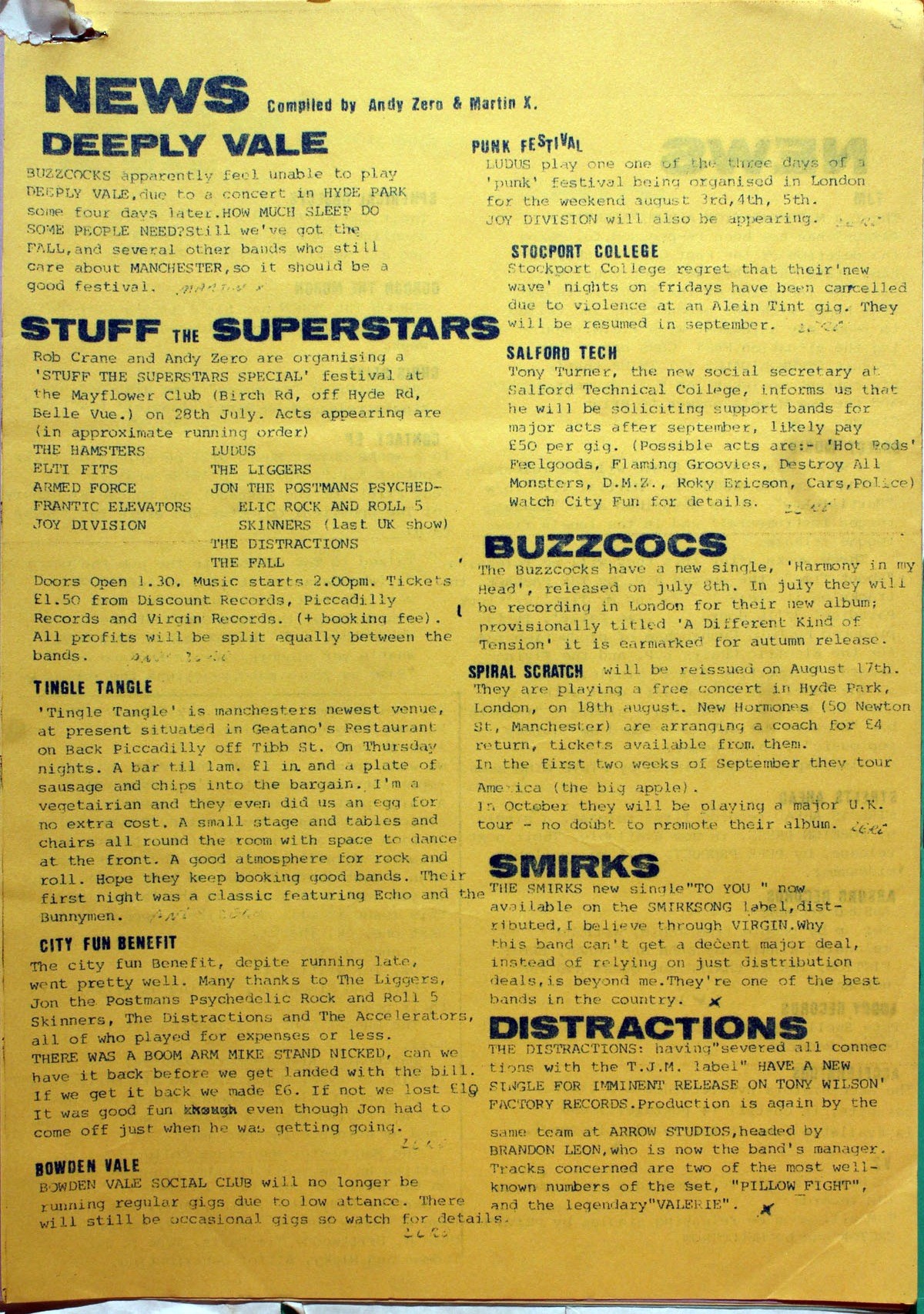 NEWS Compiled by Andy Zero and Martin X.
DEEPLY VALE
BUZZCOCKS apparently feel unable to play DEEPLY VALE,due to a concert in HYDE PARK some four days later.HOW MUCH SLEEP DO SOME PEOPLE NEED?Still, we've got the FALL,and several other bands who still care about MANCHESTER, so it should be a good festival.
MARTIN X
STUFF THE SUPERSTARS
Rob Crane and Andy Zero are organising a 'STUFF THE SUPERSTARS SPECIAL' festival at the Mayflower Club (Birch Rd, off Hyde Rd, Belle Vue.) on 28th July. Acts appearing are (in approximate running order)
THE HAMSTERS LUDUS
ELTI FITS THE LIGGERS
ARMED FORCE JON THE POSTMANS PSYCHEDELIC ROCK AND ROLL 5 SKINNERS (last UK show)
FRANTIC ELEVATORS THE DISTRACTIONS
JOY DIVISION THE FALL
Doors open 1.30. Music starts 2.00pm. Tickets £1.50 from Discount Records, Piccadilly Records and Virgin Records (+ booking fee). All profits will be split equally between the bands.
ANDY ZERO
TINGLE TANGLE
'Tingle Tangle' is manchesters newest venue, at present situated in Geatano's Restaurant on Back Piccadilly off Tibb St. On Thursday nights. A bar til 1am. £1 in and a plate of sausage and chips into the bargain. I'm a vegetairian and they even did us and egg for no extra cost. A small stage and tables and chairs all round the room with space to dance at the front. A good atmosphere for rock and roll. Hope they keep booking good bands . Their first night was a classic featuring Echo and the Bunnymen.
ANDY ZERO
CITY FUN BENEFIT
The city fun Benefit, despite running late, went pretty well. Many thanks to The Liggers, Jon the Postmans Psychedelic Rock and Roll 5 Skinners, The Distractions and The Accelerators, all of whom played for expenses or less. THERE WAS A BOOM ARM MIKE STAND KNICKED, can we have it back before we get landed with the bill. If we get it back we made £6. If not we lost £10. It was good fun even though Jon had to come off just when he was getting going.
ZERO
BOWDEN VALE
BOWDEN VALE SOCIAL CLUB will no longer be running regular gigs due to low attance. There will still be occasional gigs so watch for details.
ZERO
PUNK FESTIVAL
LUDUS play one of the three days of a 'punk' festival being organised in London for the weekend august 3rd,4th, 5th. JOY DIVISION will also be appearing.
ZERO
STOCPORT COLLEGE
Stockport College regret that their'new wave' nights on fridays have been cancelled due to violence at an Alein Tint gig. They will be resumed in september.
ZERO
SALFORD TECH
Tony Turner, the new social secretary at Salford Technical College, tells us that he will be soliciting support bands for major acts after september, likely pay £50 per gig. (Possible acts are:- 'Hot Rods' Feelgoods, Flaming Groovies, Destroy All Monsters, D.M.Z. , Roky Ericson, Cars,Police) Watch City Fun for details.
ZERO
BUZZCOCS
The Buzzcocks have a new single, 'Harmony in my Head', released on july 8th. In july they will be recording in London for their new album; provisionally titled 'A Different Kind of Tension' it is earmarked for autumn release.
SPIRAL SCRATCH will be reissued on August 17th. They are playing a free concert in Hyde Park, London, on 18th august. New Hormones (50 Newton St, Manchester) are arranging a coach for £4 return, tickets available from them. In the first two weeks of September they tour America (the big apple). In October they will be playing a major U.K. tour - no doubt to promote their album.
ZERO
SMIRKS
THE SMIRKS new single"TO YOU " now available on the SMIRKSONG label,distributed, I believe through VIRGIN.Why this band can't get a decent major deal, instead of just relying on distribution deals, is beyond me.They're one of the best bands in the country.
X
DISTRACTIONS
THE DISTRACTIONS: having"severed all connections with the T.J.M. label" HAVE A NEW SINGLE FOR IMMINENT RELEASE ON TONY WILSON' FACTORY RECORDS.Production is again by the same team at ARROW STUDIOS,headed by BRANDON LEON,who is now the band's manager. Tracks concerned are two of the most well-known numbers of the set, "PILLOW FIGHT", and the legendary"VALERIE".
X