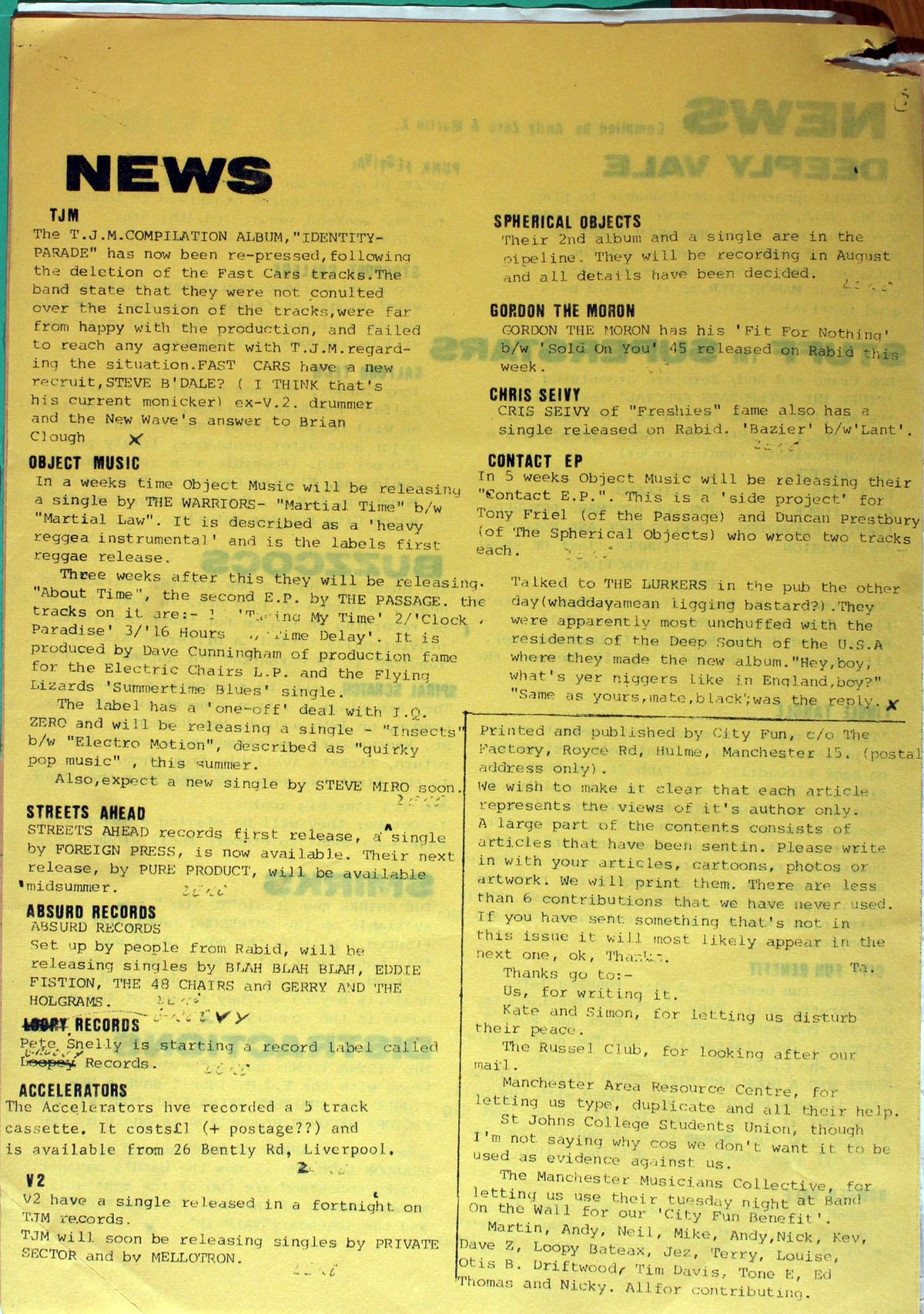 NEWS
TJM
THE T.J.M. COMPILATION ALBUM,"IDENTITY PARADE" has now been re-pressed, following the deletion of the Fast Cars tracks.The band state that they were not conulted over the inclusion of the tracks,were far from happy with the production, and failed to reach any agreement with T.J.M. regarding the situation.FAST CARS have a new recruit,STEVE B'DALE? (I THINK that's his current monicker) ex-V.2. drummer and the New Wave's answer to Brian Clough.
X
OBJECT MUSIC
In a weeks time Object Music will be releasing a single by THE WARRIORS- "Martial Time" b/w "Martial Law". It is described as a 'heavy reggea instrumental' and is the labels first reggae release.
Three weeks after this they will be releasing "About Time", the second E.P. by THE PASSAGE. the tracks on it are:- 1 'Taking My Time' 2/ 'Clock Paradise' 3/ '16 Hours' 4/ 'Time Delay'. It is produced by Dave Cunningham of production fame for the Electric Chairs L.P. and the Flying Lizards 'Summertime Blues' single.
The label has a 'one-off' deal with I.Q. ZERO and will be releasing a single - "Insects" b/w "Electro Motion", described as "quirky pop music", this summer.
Also,expect a new single by STEVE MIRO soon.
ZERO
STREETS AHEAD
STREETS AHEAD records first release, a single by FOREIGN PRESS, is now available. Their next release, by PURE PRODUCT, will be available midsummer.
ZERO
ABSURD RECORDS
ABSURD RECORDS
Set up by people from Rabid, will be releasing singles by BLAH BLAH BLAH, EDDIE FISTION, THE 48 CHAIRS and GERRY AND THE HOLOGRAMS.
ZERO
GROOVY RECORDS
Pete Shelly is starting a record label called Groovy Records.
ZERO
ACCELERATORS
The Accelerators hve recorded a 5 track cassette. It costs£1 (+ postage??) and is available from 26 Bently Rd, Liverpool.
ZERO
V2
V2 have a single released in a fortnight on TJM records.
TJM will soon by releasing singles by PRIVATE SECTOR and by MELLOTRON.
ZERO
SPHERICAL OBJECTS
Their 2nd album and a single are in the pipeline. They will be recording in August and all details have been decided.
ZERO
GORDON THE MORON
GORDON THE MORON has his 'Fit For Nothing' b/w 'Sold On You' 45 released on Rabid this week.
CHRIS SEIVY
CHRIS SEIVY of "Freshies" fame also has a single released on Rabid. 'Bazier' b/w 'Lant'
ZERO
CONTACT EP
In 5 weeks Object Music will be releasing their "Contact E.P.". This is a 'side project' for Tony Friel (of the Passage) and Duncan Prestbury (of the Spherical Objects) who wrote two tracks each.
ZERO
Talked to THE LURKERS in the pub the other day(whaddayamean ligging bastard?). They were apparently must unchuffed with the residents of the Deep South of the U.S.A. where they made the new album. "Hey,boy, what's yer niggers like in England,boy?" "Same as yours,mate,black'; was the reply.
X
Printed and published by City Fun, c/o The Factory, Royce Rd, Hulme, Manchester 15. (postal address only).
We wish to make it clear that each article represents the views of it's author only. A large part of the contents consists of articles that have been sentin. Please write in with your articles, cartoons, photos or artwork. We will print them. There are less than 6 contributions that we have never used. If you have sent something in that's not in this issue it will most likely appear in the next one, ok, Thanks. Ta.
Thanks go to:-
Us, for writing it.
Kate and Simon, for letting us disturb their peace.
The Russel Club, for looking after our mail.
Manchester Area Resource Centre, for letting us type, duplicate and all their help.
St Johns College Students Union, though I'm not saying why cos we don't want it to be used as evidence against us.
The Manchester Musicians Collective, for letting us use their tuesday night at Band On The Wall for our 'City Fun Benefit'.
Martin, Andy, Neil, Mike, Andy,Nick, Kev, Dave Z, Loopy Bateax, Jez, Terry, Louise, Otis B. Driftwood, Tim Davis, Tone E, Ed Thomas and Nicky. Allfor contributing.