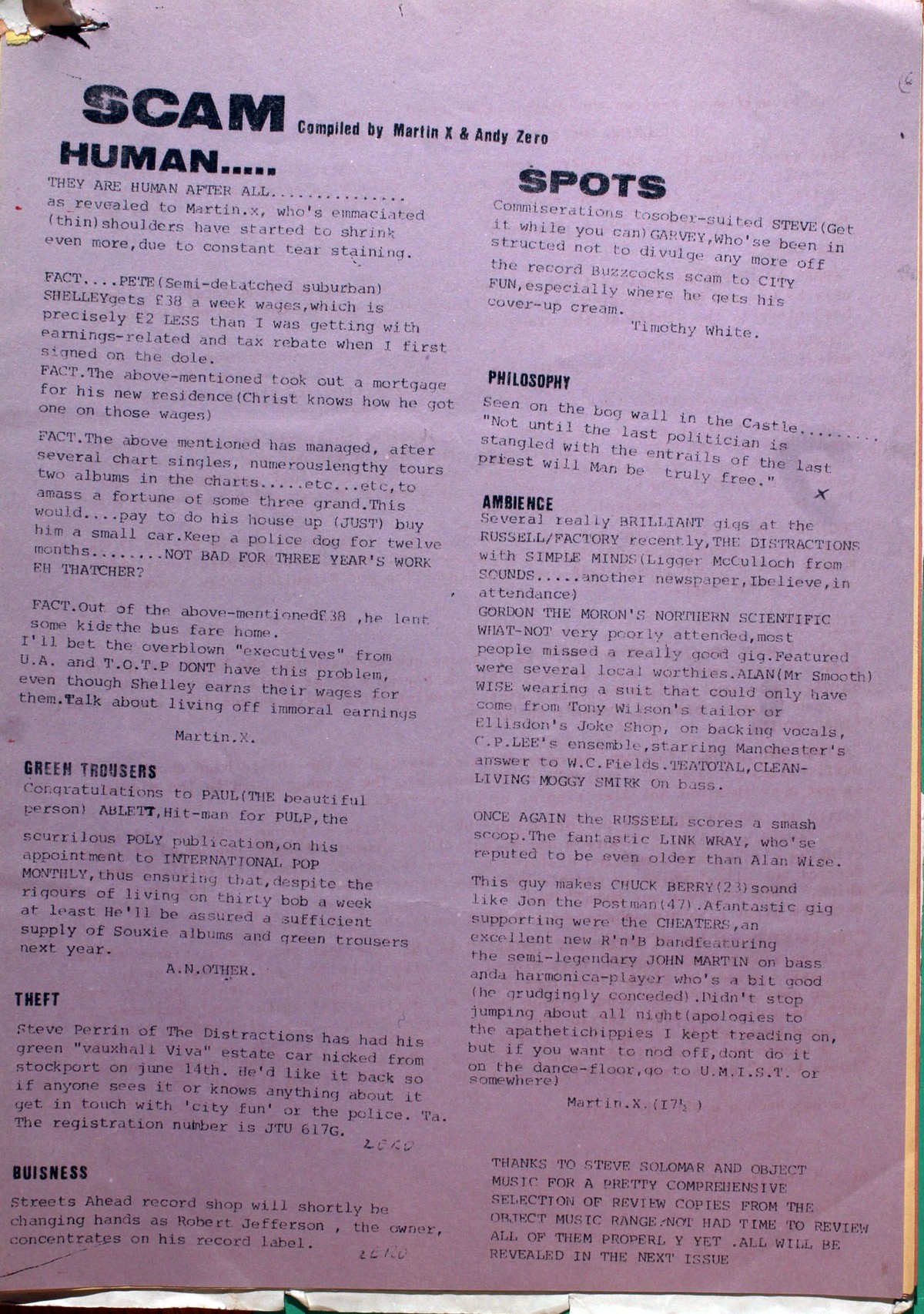 SCAM Compiled by Martin X & Andy Zero
HUMAN....
THEY ARE HUMAN AFTER ALL................... as revealed to Martin.x, who's emmaciated (thin)shoulders have started to shrink even more,due to constant tear staining.
FACT...PETE (Semi-detatched suburban) SHELLEYgets £38 a week wages,which is precisely £2 LESS than I was getting with earnings-related and tax rebate when I first signed on the dole.
FACT. The above-mentioned took out a mortgage for his new residence (Christ knows how he got one on those wages)
FACT. The above mentioned has managed, after several chart singles, numerouslengthy tours two albums in the charts....etc....etc,to amass a fortune of some three grand.This would....pay to do his house up (JUST) buy him a small car.Keep a police dog for twelve months......NOT BAD FOR THREE YEAR'S WORK EH THATCHER?
FACT. Out of the above-mentioned£38 ,he lent some kidsthe bus fare home. I'll bet the overblown "executives" from U.A. and T.O.T.P. DONT have this problem, even though Shelley earns their wages for them.Talk about living off immoral earnings.
Martin.X.
GREEN TROUSERS
Congratulations to PAUL(THE beautiful person) ABLETT, Hit-man for PULP, the scurrilous POLY publication,on his appointment to INTERNATIONAL POP MONTHLY, thus ensuring that, despite the rigours of living on thirty bob a week at least He'll be assured a sufficient supply of Souxie albums and green trousers next year.
A.N. OTHER
THEFT
Steve Perrin of The Distractions has had his green "vauxhall Viva" estate car nicked from stockport on june 14th. He'd like it back so if anyone sees it or knows anything about it get in touch with 'city fun' or the police. Ta. The registration number is JTU 617G.
ZERO
BUSINESS
Streets Ahead record shop will shortly be changing hands as Robert Jefferson , the owner, concentrates on his record label.
ZERO
SPOTS
Commiserations tosober-suited STEVE (Get it while you can) GARVEY,Who's been instructed not to divulge any more off the record Buzzcocks scam to CITY FUN,especially where he gets his cover-up cream.
Timothy White.
PHILOSOPHY
Seen on the bog wall in the Castle.....
"Not until the last politician is strangled with the entrails of the last priest will Man truly be free."
X
AMBIENCE
Several really BRILLIANT gigs at the RUSSELL/FACTORY recently,THE DISTRACTIONS with SIMPLE MINDS (Ligger McCulloch from SOUNDS.....another newspaper, Ibelieve,in attendance)
GORDON THE MORON'S NORTHERN SCIENTIFIC WHAT-NOT very poorly attended,most people missed a really good gig. Featured were several local worthies.ALAN (Mr Smooth) WISE wearing a suit that could only have come from Tony Wilson's tailor or Ellisdon's Joke Shop, on backing vocals, C.P.LEE's ensemble, starring Manchester's answer to W.C.Fields.TEATOTAL,CLEAN-LIVING MOGGY SMIRK On bass.
ONCE AGAIN the RUSSELL scores a smash scoop. The fantastic LINK WRAY, who'se reputed to be even older than Alan Wise.
This guy makes CHUCK BERRY(2 3)sound like Jon the Postman(47) .Afantastic gig supporting were the CHEATERS ,an excellet new R'n'B bandfeaturing the semi-legendary JOHN MARTIN on bass anda harmonica-player who's a bit good (he grudgingly conceded) .Didn't stop jumping about all night (apologies to the apathetichippies I kept treading on, but if you want to nod off, don't do it on the dance-floor, got to U.M.I.S.T. or somewhere)
Martin.X. (17 1/2)
THANKS TO STEVE SOLOMAR AND OBJECT MUSIC FOR A PRETTY COMPREHENSIVE SELECTION OF REVIEW COPIES FROM THE OBJECT MUSIC RANGE.NOT HAD TIME TO REVIEW ALL OF THEM PROPERL Y YET .ALL WILL BE REVEALED IN THE NEXT ISSUE