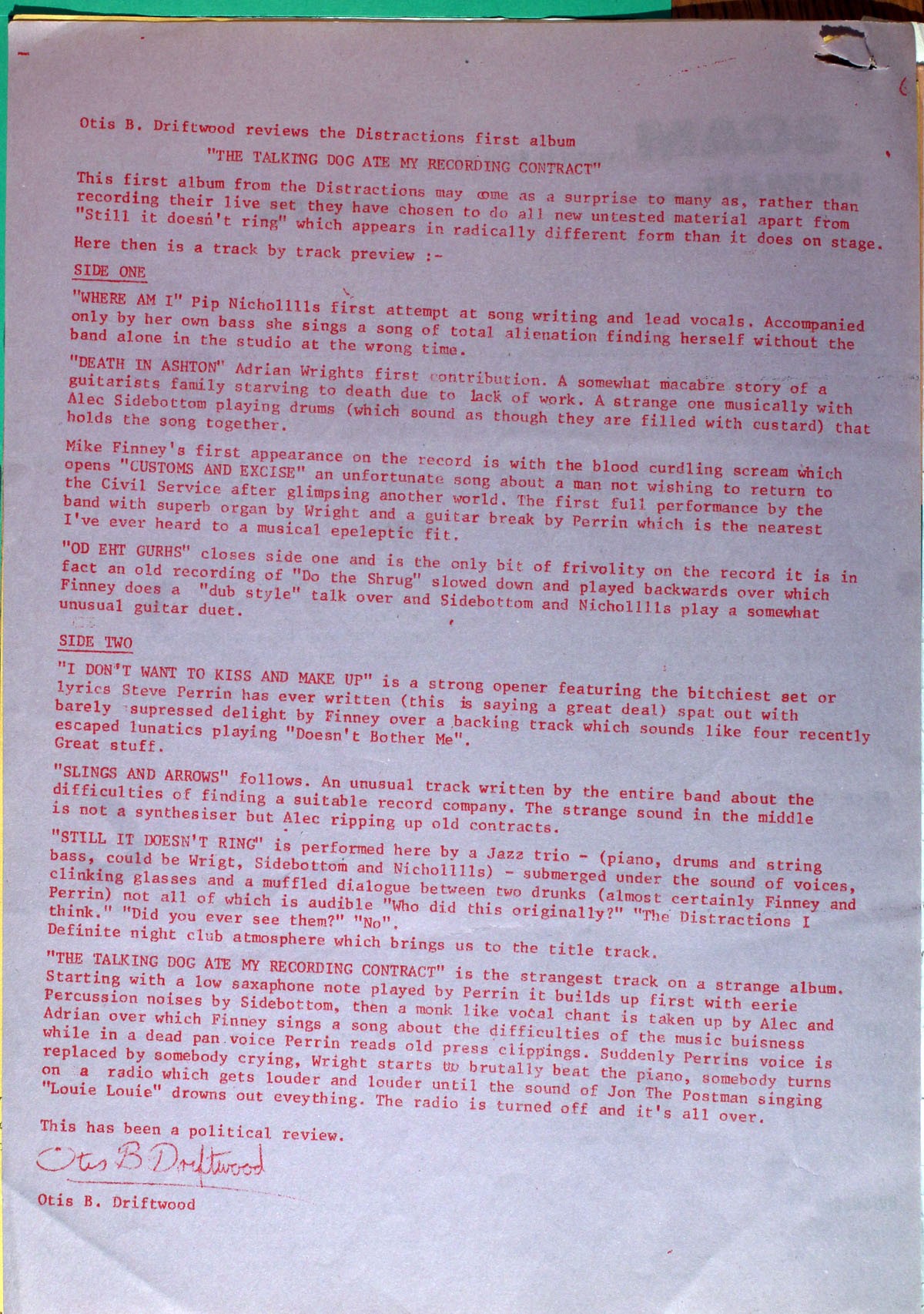 Otis B. Driftwood reviews the Distractions first album
"THE TALKING DOG ATE MY RECORDING CONTRACT"
This first album from the Distractions may come as a suprise to many as, rather than recording their live set they have chosen to do all new untested material apart from "Still it doesn't ring" which appears in radically different form than it does on stage
Here then is a track by track preview :-
SIDE ONE
"WHERE AM I" Pip Nicholllls first attempt at song writing and lead vocals. Accompanied only by her own bass she sings a song of total alienation finding herself without the band alone in the studio at the wrong time.
"DEATH IN ASHTON" Adrian Wrights first contribution. A somewhat macabre story of a guitarists family starving to death due to lack of work. A strange one musically with Alec Sidebottom playing drums (which sound as though they are filled with custard) that holds the song together.
Mike Finney's first appearance on the record is on the blood curdling scream which opens "CUSTOMS AND EXCISE" an unfortunate song about a man wishing to return to the Civil Service after glimpsing another world. The first full performance by the band with superb organ by Wright and a guitar break by Perrin which is the nearest I've ever heard to a musical epeleptic fit.
"OD EHT GURHS" closes side one and is the only bit of frivolity on the record it is in fact an old recording of "Do the Shrug" slowed down and played backwards over which Finney does a "dub style" talk over and Sidebottom and Nichollllls play a somewhat unusual guitar duet.
SIDE TWO
"I DON'T WANT TO KISS AND MAKE UP" is a strong opener featuring the bitchiest set or lyrics Steve Perrin has ever written (this is saying a great deal) spat out with barely supressed delight by Finney over a backing track which sounds like four recently escaped lunatics playing "Doesn't Bother Me".
Great stuff.
"SLINGS AND ARROWS" follows. An unusual track written by the entire band about the difficulties of finding a suitable record company. The strange sound in the middle is not a synthesiser but Alec ripping up old contracts.
"STILL IT DOESN'T RING" is performed here by a Jazz trio - (piano, drums and string bass, could be Wrigt, Sidebottom and Nichollllls) - submerged under the sound of voices, clinking glasses and a muffled dialogue between two drunks (almost certainly Finney and Perrin) not all of which is audible "Who did this originally?" "The Distractions I think." "Did yoiu ever see them?" "No".
Definite night club atmosphere which brings us to the title track.
"THE TALKING DOG ATE MY RECORDING CONTRACT" is the strangest track on a strange album. Starting with a low saxophone note played by Perrin it builds up first with eerie Percussion noises by Sidebottom, then a monk like vocal chant is taken up by Alec and Adrian over which Finney sings a song about the difficulties of the music business while in a dead pan voice Perrin reads old press clippings. Suddenly Perrins voice is replaced by somebody crying, Wright starts to brutally beat the piano, somebody turns on a radio which gets louder and louder until the sound of Jon the Postman singing "Louie Louie" drowns out everything. The radio is turned off and it's all over.
This has been a political review.
Otis B Driftwood [signed]
Otis B. Driftwood