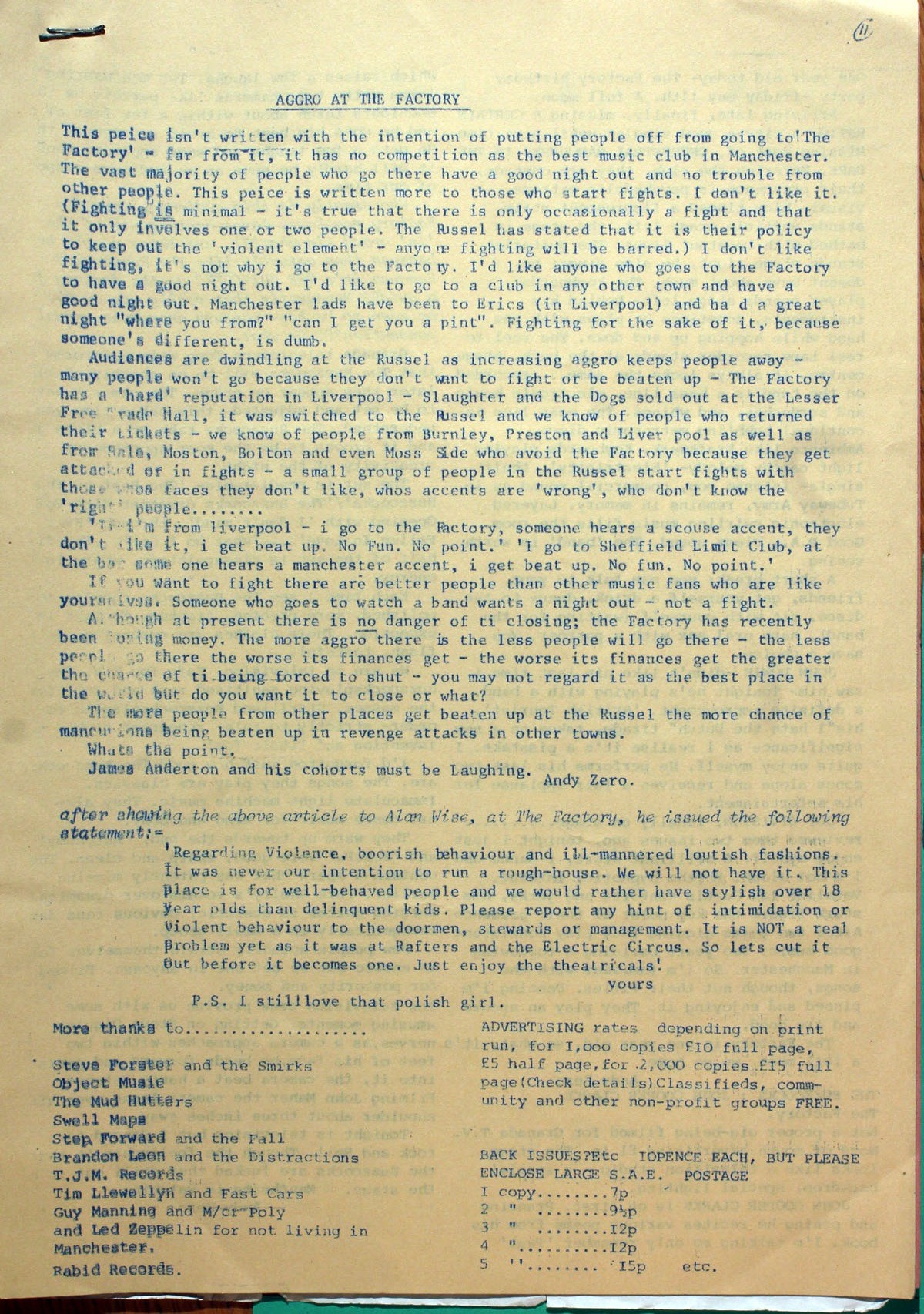 AGGRO AT THE FACTORY
This peice isn't written with the intention of putting people off from going to 'The Factory' - far from it, it has no competition as the best music club in Manchester. The vast majority of people who go there have a good night out and no trouble from other people. This peice is written more to those who start fights. I don't like it. (Fighting is minimal - it's true that there is only occasionally a fight and that it only involves one or two people. The Russel has stated that it is their policy to keep out the 'violent element' - anyone fighting will be barred.) I don't like fighting, it's not why i go to the Factory. I'd like anyone who goes to the Factory to have a good night out. I'd like to got a club in any other town and have a good night out. Manchester lads have been to Erics (in Liverpool) and had a great night "where you from?" "can I get you a pint". Fighting for the sake of it, because someone's different, is dumb.
Audiences are dwindling at the Russel as increasing aggro keeps people away - many people won't go because they don't want to fight or be beaten up - The Factory has a 'hard' reputation in Liverpool - Slaughter and the Dogs sold out at the Lesser Free Trade Hall, it was switched to the Russel and we know of people who returned their tickets - we know of people from Burnley, Preston and Liver pool as well as from Sale, Moston, Bolton and even Moss Side who avoid the Factory because they get attacked or in fights - a small group of people in the Russel start fights with those whos faces they don't like, whos accents are 'wrong', who don't know the 'right' people........
'If I'm from liverpool - i go to the Factory, someone hears a scouse accent, they don't like it, i get beat up. No Fun. No point.' 'I go to Sheffield Limit Club, at the bac some on hears a manchester accent, i get beat up. No fun. No point.'
If you want to fight there are better people than other music fans who are like yourselves. Someone who goes to watch a band want a night out - not a fight.
Although at present there is no danger of ti closing; the Factory has recently been losing money. The more aggro there is the less people will go there - the less people the worse its finances get - the worse its finances the greater the chance of ti being forced to shut - you may not regard it as the best place in the world but do you want it to close or what?
The more people from other places get beaten up at the Russel the more chance of mancunions being beaten up in revenge attacks in other towns.
Whats the point.
James Anderton and his cohorts must be Laughing.
Andy Zero.
after showing the above to Alan Wise, at The Factory, he issued the following statement:-
'Regarding Violence, boorish behaviour and ill-mannered loutish fashions. It was never our intention to run a rough-house. We will not have it. This place is for well-behaved people and we would rather have stylish over 18 year olds than delinquent kids. Please report any hint of intimidation or violent behaviour to the doormen, stewards or management. It is NOT a real problem yet as it was at Rafters and the Electric Circus. So lets cut it out before it becomes on. Just enjoy the theatricals'.
yours
P.S. I still love that polish girl.
More thanks to..............
Steve Forster and the Smirks
Object Music
The Mud Hutters
Swell Maps
Step Forward and the Fall
Brandon Leon and the Distractions
T.J.M. Records
Tim LLewellyn and Fast Cars
Guy Manning and M/cr Poly
and Led Zeppelin for not living in Manchester
Rabid Records.
ADVERTISING rates depending on print run, for I,ooo copies £IO full page, £5 half page, for 2,000 copies £I5 full page(Check details) Classifieds, comm-unity and other non-profit groups FREE.
BACK ISSUES?Etc IOPENCE EACH, BUT PLEASE ENCLOSE LARGE S.A.E. POSTAGE
I copy.......7p
2 " .......91/2p
3 " ........I2p
4 " ........12p
5 ' '.........I5p etc.