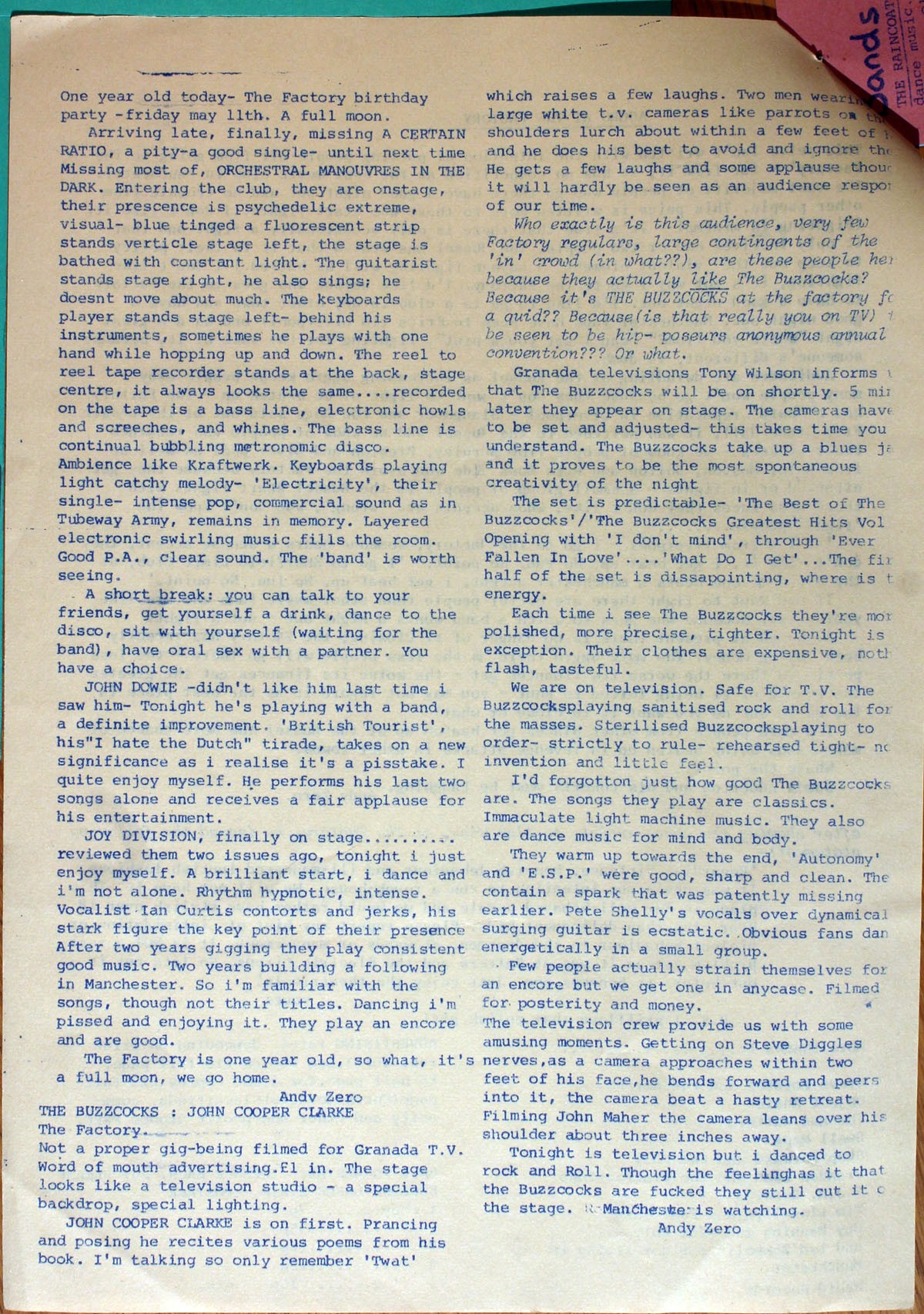 One year old today - The Factory birthday party -friday may 11th. A full moon.
Arriving late, finally, missing A CERTAIN RATIO, a pity-a good single- until next time Missing most of, ORCHESTRAL MANOUVRES IN THE DARK. Entering the club, they are onstage, their presence is psychedelic extreme, visual- blue tinged a fluorescent strip stands vertical stage left, the stage is bathed with constant light. The guitarist stands stage right, he also sings; he doesnt move about much. The keyboards player stands stage left- behind his instruments, sometimes he plays with one hand while hopping up and down. The reel to reel tape recorder stands at the back, stage centre, it always looks the same....recorded on the tape is a bass line, electronic howls and screeches, and whines. The bass line is continual bubbling metronomic disco.
Ambience like Kraftwerk. Keyboards playing light catchy melody- 'Electricity' , their single- intense pop, commercial sound as in Tubeway Army, remains in memory. Layered electronic swirling music fills the room. Good P.A., clear sound. The 'band' is worth seeing.
A short break: you can talk to your friends, get yourself a drink, dance to the disco, sit with yourself (waiting for the band) , have oral sex with a partner. You have a choice.
JOHN DOWIE -didn't like him the last time I saw him- Tonight he's playing with a band, a definite improvement. 'British Tourist', his"I hate the Dutch" tirade, takes on a new significance as i realise it's a pisstake. I quite enjoy myself. He performs his last two songs alone and receives a fair applausse for his entertainment.
JOY DIVISION, finally on stage...... reviewed them two issues ago, tonight i just enjoy myself. A brilliant start, i dance and i'm not alone. Rhythm hypnotic, intense. Vocalist Ian Curtis controls and jerks, his stark figure the key point of their presence After two years gigging they play consistent good music. Two years building a following in Manchester. So i'm familiar with the songs, though not their titles. Dancing i'm pissed and enjoying it. They play an encore and are good.
The Factory is one year old, so what, it's a full moon, we go home.
Andy Zero
THE BUZZCOCKS : JOHN COOPER CLARKE
The Factory.
Not a proper gig-being filmed for Granada T.V. Word of mouth advertising.£1 in. The stage looks like a television studio - a special backdrop, special lighting.
JOHN COOPER CLARKE is on first. Prancing and posing he recites various poems from his book. I'm talking so only remember 'Twat' which raises a few laughs. Two men wearing large white t.v. cameras like parrots on their shoulders lurch about within a few feet of him and he does his best to avoid and ignore them. He gets a few laughs and some applause though it will hardly be seen as an audience response of our time.
[In italics] Who exactly is this audience, very few Factory regulars, large contingents of the 'in' crowd (in what??), are these people here because they actually like The Buzzcocks? Because it's THE BUZZCOCKS at the factory for a quid? Because(is that really you on TV) to be seen to be hip-poseurs anonymous annual convention??? Or what. [End italics]
Granada televisions Tony Wilson informs us that The Buzzcocks will be on shortly. 5 minutes later they appear on stage. The cameras have to be set and adjusted- this takes time you understand. The Buzzcocks take up a blues jam and it proves to be the most spontaneous creativity of the night
The set is predictable- 'The Best of The Buzzcocks'/'The Buzzcocks Greatest Hits Vol 1'. Opening with 'I don't mind' , through 'Ever Fallen In Love'....'What Do I Get'...The first half of the set is disappointing, where is the energy.
Each time i see The Buzzcocks they're more polished, more precise, tighter. Tonight is no exception. Their clothes are expensive, nothing flash, tasteful.
We are on television. Safe for T.V. the Buzzcocksplaying sanistised rock and roll for the masses. Sterilised Buzzcocksplaying to order- strictly to rule- rehearsed tight- no invention and little feel.
I'd forgotton just how good The Buzzcocks are. The songs they play are classics. Immaculate light machine music. They also are dance music for mind and body.
They warm up towards the end, 'Autonomy' and 'E.S.P.' were good, sharp and clean. They contain a spark that was patently missing earlier. Pete Shelly's vocals over dynamically surging guitar is ecstatic. Obvious fans dance energetically in a small group.
Few people actually strain themselves for an encore but we get one in anycase. Filmed for posterity and money.
The television crew provide us with some amusing moments. Getting on Steve Diggles nerves,as a camera approaches within two feet of his face,he bends fowards and peers into it, the camera beat a hasty retreat. Filming John Maher the camera leans over his shoulder about three inches away.
Tonight is television but i danced to rock and Roll. Though the feelinghas it that the Buzzcocks are fucked they still cut it on the stage. Manchester is watching.
Andy Zero.